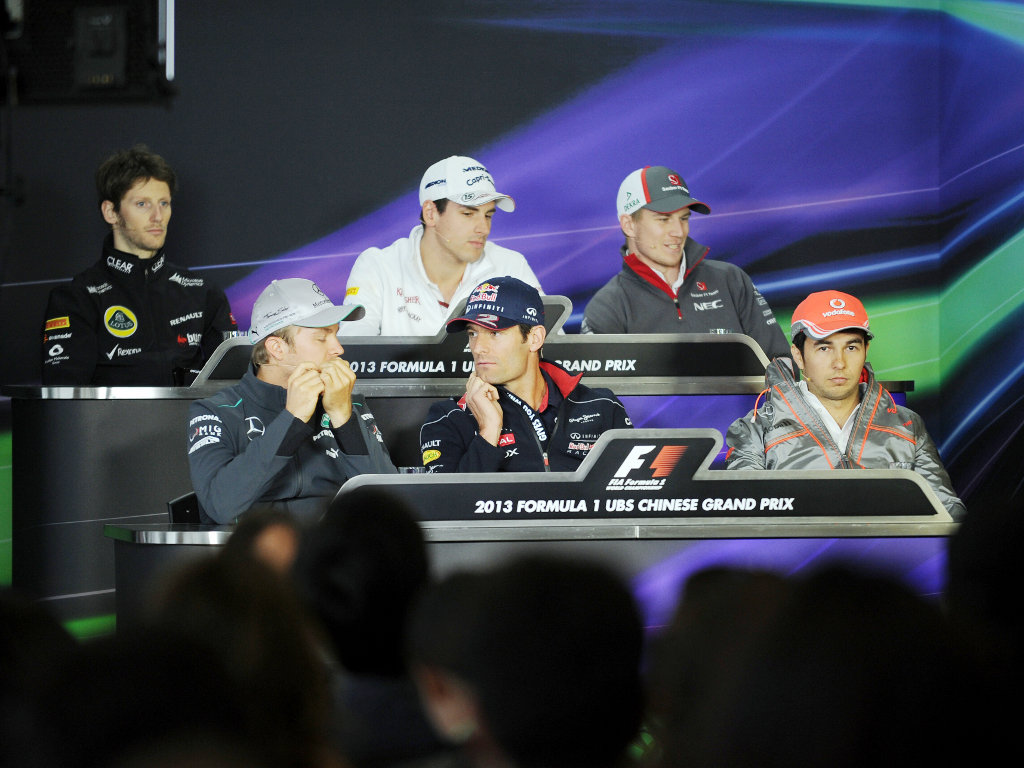 Mark WEBBER: Well, I went to the hairdresser’s and he wanted to talk a lot and I said… I could see that I wanted to get in and out quite quick, so I said just shave it off. When he was half way through before I thought shit, that’s a bit short now… but anyway it doesn’t matter. It’s practical, all good and yeah like you saw a few months too early but back to the old school haircuts. I used to get these when I was younger. Apparently I look younger now too so that’s a good sign.

Q: When we last saw you, you left with quite a few questions being asked within yourself and also of the team as well. Are you quite happy with the way things are now within the team and in your own head?

MW: I’m fine. I was always going to Australia after that race. Obviously it was mentioned after the race in the press conference and people put two and three together and get more information I suppose. It was a little bit of a break for all of us – three weeks, it was Easter as well – so good to go down there for a bit of relaxation after the back of winter testing and the first few races. But you get pretty anxious pretty quickly. I’m really looking forward to getting back in the car here and getting on with the racing again. This track always provides good racing actually. We’ve seen a few (good races) over the last few seasons here, apart from Nico last year obviously when he was very strong off the front, but generally we’ve had some good grands prix here. Looking forward to getting back in the car. Procedurally, the team, everything is fine. Obviously it was a bit of an interesting weekend in Malaysia but, yeah, looking forward to getting racing here.

MW: Yeah, I think we proved the car is pretty competitive at the first two races, not dominating by any means – no one is doing that yet. We know we’ve got work to do. As you say, Melbourne was a pretty competitive outing but the long and short of it is we didn’t have a car good enough to win there but in Malaysia we did – two different situations in terms of track layouts and temperatures and all sorts of things. Here, probably a little bit more back towards the Melbourne window let’s say. So let’s see how the track and the cars, the temperatures, how everything evolves around that great word – the tyres. So that’s going to be important again this weekend. We’ve put a lot of effort in, the guys have been working hard and I’ve been doing a lot of work in the simulator, so ready to go.

Q: Nico you left Malaysia a little frustrated as well. Do you understand the reasons for what happened there and are you happy with them?

Nico ROSBERG: Yeah, we’ve definitely discussed it and it’s all sorted for the future, which is important, so yes.

Q: Well, you had a fantastic race here last year – your first ever pole and your first ever win as well. Testing’s been good, in the two races so far you’ve been competitive, so what chances here?

NR: Yeah really looking forward to this weekend. Massively motivated because I led the race here the last years and finally winning it last year. So this track works really well for me, for the car and I’m convinced I can do a really good result here.

Q: You know what you did right last year and that went on to win you the race, so I guess the thing to do is choose the same set of regulations, the same set-up as last year?

NR: Unfortunately, it’s not quite that easy. Thing evolve so quickly – the different tyres we have this year bring us into a whole new situation. So you can’t really compare, you need to take it as it comes and adapt to what you have this weekend. And so, that will be crucial, working through Friday and Saturday morning to try to optimise everything in order to have a great weekend.

Q: Romain, you won your first points here last year with sixth place. What are your feelings after the first two races of this season and looking ahead to this race as well. How do you see the current Lotus?

Romain GROSJEAN: It’s difficult to say before the weekend. We’ve seen that Kimi won in Australia, which was good for the team. It means that the car was able to do it. Then in Malaysia we had a good race from the point where it was dry. We know that when it’s wet it’s not our biggest strength. But here it seems to be dry for the whole weekend, which is a good point. We have a few updates on the car, plus on my side the new exhaust that Kimi ran in KL. So it’s going to be good and looking forward to it. And as you said, it’s good memories here, as I scored my first every point in F1 last year and hopefully some more this year.

RG: It’s difficult when you’re not in the car to know. I think we have a few ideas of what we need to make sure is right and what can not get right and from there we have a more deep look into it and double check a few things. The tyres don’t make it easier, as they are very, very sensitive to the performance of the car, sometimes a bit too much. But on the other hand it’s the same for everybody, so we do our best. Hopefully updates help us to get on top of it and from there do every good session and see where we are Sunday evening.

Q: Is that the main concentration at the moment?

RG: Yeah. To do the best you can in every single moment of the weekend, starting in Free Practice 1 and finishing after the 55th or 56th lap of the race. You know then you can see where you are. We need to put everything right – tyre window, set-ups, everything together, and see where we finish.

Q: Adrian, you have made an absolutely dream comeback to Formula One. How difficult has it been?

Adrian Sutil: No, not too difficult. I was just driving as fast as I could. I was happy to be back in the car and it worked very well. The car, for my opinion, is very good. It’s the best car I’ve driven. Very neutral balance, quite good on the tyres and the race pace is very competitive. It was just a good start in Melbourne, disappointing in Malaysia because the pace was very, very good again but in qualifying caught out a little bit again with the rain and in the race, well, we saw the problems with the pit stops. But we solved those