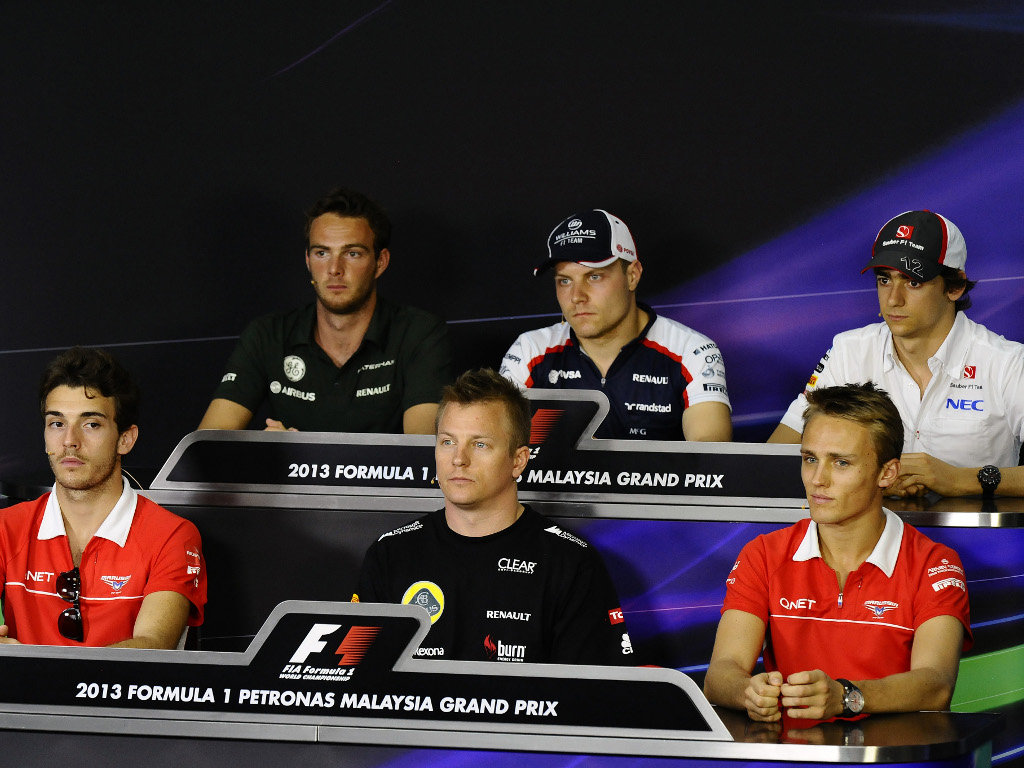 Q: Kimi, great win for you and the team to start of with, in cold conditions. How do you and the team feel about being able to repeat that performance level in the heat of Malaysia?
Kimi RAIKKONEN: We don’t know yet. Last year we were pretty good when it was hot and actually it was better for us, but obviously we haven’t run in this kind of conditions and the winter has been very cold, so I have no idea. But if it’s anything like it was last year we should be pretty OK, but we have to wait and see how it goes.

Q: One notable detail from the Melbourne weekend is that you were over a second slower than the Red Bull in qualifying, but you turned it round to be over a second faster than them on your fastest race lap. What do you put that down to?

KR: I wouldn’t say that the qualifying was a very normal situation with all the weather – it got delayed and all that stuff. But if it was normal dry conditions I’m pretty sure we are more close. We will wait and see when we get a normal qualifying. Then, I’m sure we are not a second behind, or 1.4 seconds or whatever it was.

Q: Esteban, coming to you. Youngest driver in Formula One and the best-placed rookie in Australia in 13th. A tricky Sunday for the Sauber team with your team-mate not starting the race, but what did you take from the weekend?
Esteban GUTIERREZ: Well, for me the experience was very important. Being able to say that I finished my first Formula One race is already quite a good step. And from then on, taking the experience into account, I will try to improve on the points where I can improve following this second challenge here in Malaysia. It will be very different circumstances but I think it’s going to be a very exciting one.

Q: Can you talk about the pressure of expectation, given what Sergio Perez did here last year in a Sauber and what he went on to do in the rest of the year?

EG: It is obviously something that is there but I’m not going to think about it because it’s different circumstances. I think the weather is varying a lot here and it’s playing a big role in how the race is going. I’m going to try to do my best, going at my own pace and improve where I can improve, step by step.

Q: Valtteri, you finished 14th in Melbourne, outqualified your team-mate [Pastor] Maldonado and finished the race. What did you take away from your debut?
Valtteri BOTTAS: Of course I learned a lot in my first grand prix. It was tough but it was nice to see that everything went without any bigger problems. Of course we would have liked to finish the race in a much higher position and everyone was expecting much more from us, including us. From my side I think it was not a bad first race but definitely we didn’t finish where we wanted to.

Q: As you say, the team is not where it wants to be. Why do you think the car is struggling?

VB: Well I’m not going to go into the details now but we understand now better what went wrong, because the car has potential. The performance is there and we just need to get it out really. And for this grand prix already we think we can fix some things. We will see tomorrow a little bit more where we are.

Q: Jules, 11th-fastest race lap en route to a 15th-placed finish on your debut. It’s a performance that’s got you on a number of people’s radars already. What did you think of it?
Jules BIANCHI: Well, honestly it has been a really nice weekend for me in Australia even if it was quite a late call for me because I didn’t do all the pre-season testing. Anyway, I was really happy. I just tried to enjoy and see what we were able to do in the race. Obviously the race went pretty well. We had a good start, everything was good, and we did a good result. We know what we have to improve and we will try to do that for the next few races.

Q: You were with Force India of course in February in testing and you only had on test with Marussia before Australia. What do you think is possible with this car this season?

JB: I think I was really surprised when I drove it for the first time. My expectation was a lot lower than that. I was really happy when I drove it. I think we can do good results. We know what we have to improve again, so we’re just trying to do that, trying to improve the car and trying to improve myself as well, because I’m new in the team, new in Formula One. I want to show people what I am able to do, so I will try to do my best for all the other races.

Q: Max Chilton, coming to you. Seventeenth in Melbourne for Marussia on your debut. Things have obviously happened pretty quickly for you, getting into Formula One at 21. How are you settling in?
Max CHILTON: I feel comfortable. I felt ready when the decision was made that I got the race seat. I believe in myself, that I’ve got a good chance. I think this year the Marussia car has got a good chance of moving its way up the field. I feel at home, the team are fantastic and I’ve now got a really good team-mate to work with and I can maybe learn from, and maybe he can learn from me, so it’s a winning formula.

Q: You obviously know this track; you raced here in GP2 and finished on the podium. What do you think of it?

MC: Yeah, it’s a very challenging circuit, it’s got some long, high-speed flowing corners but then you’ve got some technical stuff to get out of the corner onto a long straight, which is very important. The main thing with this circuit is the heat. It was a tough race last year, but I can tell that it doesn’t feel as hot as last year, so I don’t need to worry about that. We just need to focus on getting the most out of the car and beating our rivals.

Q: Giedo, you out-qualified your team-mate and got an 18th-place finish in Melbourne. What did you take from your first experience of Formula One?
Giedo VAN DER GARDE: It was a tough race. Max hit me in the first stint, so the floor got damaged quite badly. Anyway, we managed to finish the race and it was a good experience for me. I learned a lot with the tyres. Now this is the next step and we’ll see what we can do here.

Q: Looks like you’re starting out the year chasing Marussia. Do you see reasons in the pipeline to be positive?

GVDG: I think with here you never know what the weather is going to be. I think we looked quite strong, I have to say, so I hope for a bit of rain here. And then the next two [races] we know we still have the same car and in Barcelona we’ll get a big upgrade, so let’s see where we are then.