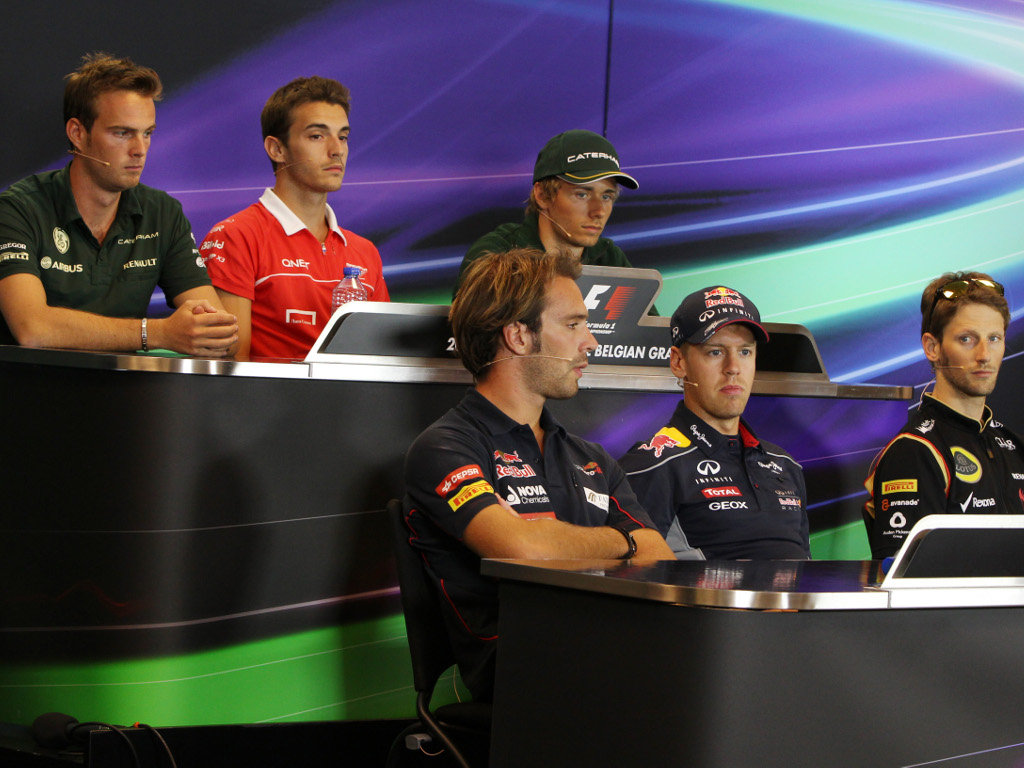 Q: Jules, can we start with you? Ten races into your Formula One career you’ve got some solid results. Do you feel you’re established as an F1 driver now?

Jules BIANCHI: Obviously the first part of the season has been really good for me and the team. The second part a bit more difficult. Now we’re going into the last part and I feel confident. I was really happy with the first result we had but we still need to push and improve.

JB: Well, I think the right move is first of all to think about this year, finish the season and let my manager and Ferrari see what we can do and they will decide and they will a good call but for sure I’m happy and pleased with Marussia.

Q: Giedo, moving to you now. A bit of a tough start to the year but things have really seemed to turn around recently, particularly in the last race. What was the secret of that turnaround?

Giedo VAN DER GARDE: I think it’s a lot to do with the workload. I’ve been working really hard. Of course, it’s for rookies not easy to come in. I think Jules was a little bit better than me at the beginning. But it went better and better and you see a good direction going, especially the last race, it was going really well. Happy with the team, happy with the performance and we keep on pushing like this.

Q: And your own thoughts about next year?

GVDG: Next year is still far away. I still want to focus on the next following races, do well, maximise myself. I think the new tyres are helping me a little bit, with my style of driving, so then we’ll see where it ends up.

Q: Moving to you Sebastian, I was going to ask you about highlights of the season but I see you’ve gone out and got a few highlights of your own, under your cap, you’re hiding it now. You obviously have a comfortable lead in the championship but after the performance of Hamilton [in Hungary] and with Mercedes winning three of the last five are you beginning to feel less comfortable?

Sebastian VETTEL I think we had a great first part of the season. Very good results, unfortunately one DNF, but all in all I think we can be very happy with the first half. Now entering the second half and looking at the calendar I think it will be very busy for all of us but I think we have the same reason to be confident as we had starting the season. I think we have a great car, a great team, a strong package, which hopefully is good enough to fight for victories in the next couple of races.

Q: Obviously things are hotting up in the search for your new team-mate – lots of discussions going on. What, to you… what do you feel would be the ideal characteristics of the person sitting in the car on the other side of the garage next season?

SV: At the end of the day I think it doesn’t really matter too much. I think ideally you would like someone who is competitive, as competitive as you are, so that we are pushing each other. You don’t have to be best friends with whoever is racing next to you. At the end of the day you have to work for the team. I think that’s one of the most important bits, so you work in the same direction and hopefully ensure that the car gets faster, you pull in the same direction in terms of car development. I think that’s the most important thing. Whether you like each or not is not that important. If it’s the case, then probably it’s a bonus, but I don’t think it’s absolutely necessary.

Q: Romain, first of all congratulations from all of us on the birth of your son. How does it feel?

Romain GROSJEAN: It feels like good entertainment, the best thing ever in the world.

Q: Will it change the way you drive?

RG I think I have a different mind from the past. I have been trying to progress a lot. It may not change lap times but I’m still trying to improve myself.

Q: Twenty-three points in the last two grand prix, your best form of the season. What’s brought that about?

RG: We had a decent run since Bahrain, where we found out what I didn’t like on the car at the start of the season. In Silverstone we had a little bad luck. I had a bad Monaco, that was myself, but then I think I was getting better and better and we had in the last two races fights for victory, which is always good. The car was performing well in quali and the race, so happy with that, happy with the progress we are doing and the updates that being brought by the team. Just trying to do my best and giving 100 per cent every time.

Q: You’ve had a clean sheet in race starts this season but obviously coming back here everyone remembers 12 months ago, what do think about that now?

RG: Well, as I say, a different state of mind and I think I’ve progressed a lot and worked on that and I think the 2013 starts prove that I did my duties. No, I’ll keep pushing and trying to do my best in every circumstance. When every eye is on you, it’s easier for the others to play with that. But I’m here today to give my best, trying to win races, what I’ve been trying to do in the last two grand prix and it’s getting close and closer, which is good. So I’ll keep progressing, keep working and keep doing the same things and I’ll keep doing clean starts.

Q: Jean-Eric, moving to you, we saw the interview you gave to L’