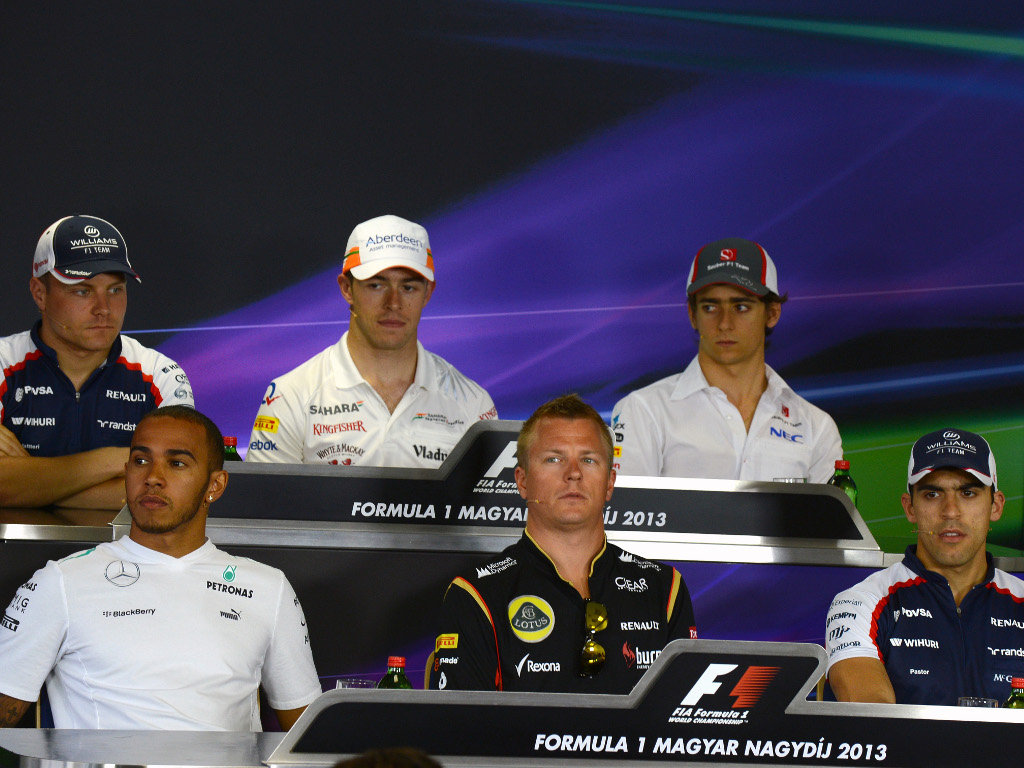 Q: Good afternoon. We’ll start with Lewis Hamilton. As a three-time winner here and a two-time pole-sitter, I think the heat is on, literally, here this weekend for you to try to make it four wins. Forty degrees ambient expected on Sunday, how much is that going to be a disadvantage to you and Mercedes?

Lewis HAMILTON: It’s good to see everyone again. It’s going to be tough this weekend definitely – the conditions will not help. Plus, we haven’t driven the tyres as everyone else has. We’ve got a bit of catching up to do, but that’s what we do best and we just have to work as hard as we can this weekend to try to understand the tyres and put ourselves in the best position possible. We have a lot of work to do to continue to improve our race pace, but I anticipate it will be a difficult weekend.

Q: Do you think you are at more of a disadvantage, are you worse off, or is every team in the same boat with the temperatures this weekend?

Q: Nine races into your Mercedes career and we’re almost at the half-way point of the season. Do you see still yourself as a championship contender?

LH: I don’t really look at myself as a championship contender at the moment. Of course, we’re fourth, we’re second as a team in the Constructors’ Championship, so… just at the beginning of the season everyone was writing me off and then all of a sudden they changed their opinions and we’ve had some really good results. That’s just due to all the hard work the team are putting in and we’re not giving up. We’re going to keep pushing. We hope that we’re going to get some wins in the future races coming. It’s going to be tough but I’m really happy with how the season has gone so far, especially compared to where the team was last year, it’s a massive step.

Q: Let’s turn to Pastor Maldonado next. Can we start with a comment about Williams’ appointment in the last few days of Pat Symonds, who comes in as technical director. From a driver’s perspective, how welcome is that and how necessary do you think it was that the team have a new technical director and new leadership in that part of the company?

Pastor MALDONADO: We had a hard beginning to the season with the car, fighting a lot to improve and develop the conditions and the performance. It’s quite tough for us, still. We try to put everything together in the past races. Some races we were a bit better, some others not. Especially the consistency and the race pace is quite good on our car, just missing a lot of performance in quali which is penalising us a lot. Starting from the back is not the best for us. Yeah, I think we need some change. The way, how we’ve been working, trying to improve out performance was not the best and for sure any change in a good way is very welcome.

Q: What about yourself at the moment? I think ‘silly season’ is very much upon us, a few rumours in the press about your future career. Did you take much notice of that? Can it be a destabilising factor for a driver?

PM: No, I’m still full focused on the season. I think we can still improve. We are a strong team. Last year we were fighting for good places, sometimes even fighting for the podium and this year, some years you miss the pace. We just need to be together as a team, work harder than before, try to fix the problem and to be there again. I think we have all the tools to become again very competitive.

Q: Thanks Pastor. Esteban, let’s turn to you next. Looking at the championship table, you’re the leading rookie, how do you assess your performance in the first half of your first Formula One season?

Esteban GUTIERREZ: It’s been very challenging. Obviously I’m not completely happy with how the first part of the season went. But again, being a rookie I’ve been focusing a lot on gaining a lot of experience to improve every part I can. I think what matters is the second half of the season, Everything will be judged on how the second half goes and I’m full focused on what is happening from now own.

Q: What areas have you been focusing on most? Where do you think improvements need to be made?

EG: I think qualifying can be improved a lot. There’s obviously a lot of variable playing into account on performance, sometimes different car set-ups, different things, trying to experiment with new things. Obviously this puts the situation a little bit more difficult. The team’s situation is not the best. We were expecting a lot better performance from the car. But we are close as a team and we are working ourselves to get all these things right.

Q: Because of that situation you mentioned with the team, do you feel you haven’t had the full opportunity to show exactly what you can do?

EG: Well, definitely it’s affecting that, but as I said the second part of the season there is a good chance to show what is really our performance, our capabilities and obviously to put everything together, to reflect everything in the results.

Q: Valtteri, if we could turn to you, the other rookie amongst us this afternoon. Did you feel you’ve had the opportunity to fully show your ability behind the wheel or is the performance of the car not helping you?

Valtteri BOTTAS: I think for sure it’s not helping. Also we expected a much better start for the season. If you would be consistently fighting in the top ten, everyone would see maybe a bit more of what you can do. It’s not easy but I’m trying my best and I think still improving a lot all the time. I think the first half of the season hasn’t been too bad for me. Of course when I look back there’s always things you could have done better. You learn all the time, that’s how it is.

Q: With Pat Symonds arrival, is it too much to expect results will turn around this year, very quickly? As a driver is that something you will be looking for?

VB: Of course you would hope so but I think the fact is it’s not a quick fix. It’s still going to take time and we need to keep working on the areas where we need to improve and I think it’s more about the future, not necessarily the end of the year. Of course we try to improve. Any improvement would be nice because it’s so close at the moment. For me it’s a positive thing. It was good to work with Mike before but I think at this stage maybe we just need some new ideas and new opinions.