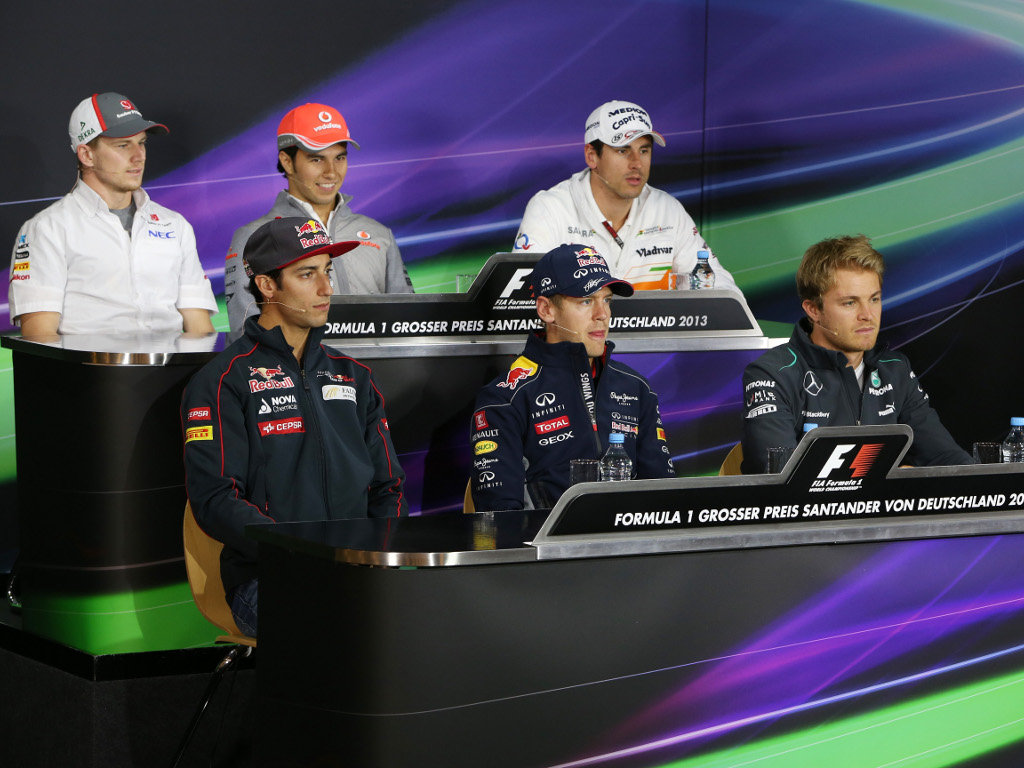 Q: Good afternoon to all six of you. Not much time between the last race and this – Silverstone still very much fresh in our minds. I think all six of you had a very eventful race in Britain. So let’s start off with your thoughts on the race in Silverstone and the afternoon you had there. I guess we should start with Nico Rosberg, as you won.

Nico ROSBERG: I had a good afternoon! It was a very good race weekend in general and I’m really to come out with that result at the end. To have a fast car in the race as well, which has been our weakness in recent weeks and months. So to have improved there was great. And home grand prix for the team, so to win there was absolutely fantastic.

Sebastian VETTEL: I think we had a solid weekend. We were able to qualify well right behind the Mercedes, which was I think the best we could do on Saturday. But on Sunday we had good pace in the race. Obviously, it’s difficult to know as Lewis had a tyre failure very early on but I think we could have matched him in terms of race pace. But after that, quite frustrating to lose the lead due to a technical problem, but as I said after the race these things happen. So I think we’ve understood the problem, fixed the problem, so we move on.

Q: Sergio, what about you, what stands out for you from your race at Silverstone?

Sergio PEREZ: Tyres I think. I think the race itself was better than expected. We had better race pace and in the race itself it was a good strategy and so on. We were able to do better than expected but then with the safety cars it got us in the wrong place and towards the end I didn’t have good tyres and the people behind were coming a bit quicker and then I had the explosion with the tyre.

Adrian SUTIL: Yeah, exciting race, interesting race. I would say the pace was not generally as good as expected, so I had to always look more in the mirror and try to make myself as wide as possible and protect my position. I had a very good start. I was running fourth for a long time and then third after the re-start after the second safety car. It looked close to a podium but still our car was just not fast enough and maybe it was a bit unlucky the second safety car period but nevertheless I think there was a chance, a small little chance, to get on the podium, if after the re-start something else would have happened. We risked it and stayed out and then of course a lot of cars with better tyres were behind and I lost quite a few positions very quickly. But seventh in the end was some good points for the team, we stabilised our position and we’re fifth in the Constructors’ World Championship and that’s very important for us.

Q: What about you Daniel, just finishing behind Adrian in eighth place after that career-best fifth?

Daniel RICCIARDO: It seemed for the last half of the race we were tied together for a little bit. The safety at the end was a bit of a lottery I guess. We were in fourth at the time behind the safety car and obviously fourth is a great position at the time, for us, for the team. Whether we pitted or not, I guess it was a bit of a gamble at the time, whatever we chose to do, and obviously we stayed out and lost out because of it. But I think the weekend as a whole went really well, from Friday through to Sunday we were always in the top 10, always strong. I think our race pace was good as well. It’s positive for us. It would have been nice to get a few more points and I’m sure we’ll get another opportunity.

Q:Finally, Nico Hulkenberg. At the back a chaotic race at times but one that eventually brought you your second points finish of the season.

Nico HULKENBERG: Yeah, happy to get away with a point after quite a long dry period. It was a good feeling for me and the team to have a point. Overall, quite an exciting race with lots of wheel-to-wheel action. So it was a lot of fun from inside the car. Fortunately, I wasn’t one of the guys who had the tyre problems.

Q: So this weekend here: it’s the first German Grand Prix here at the N