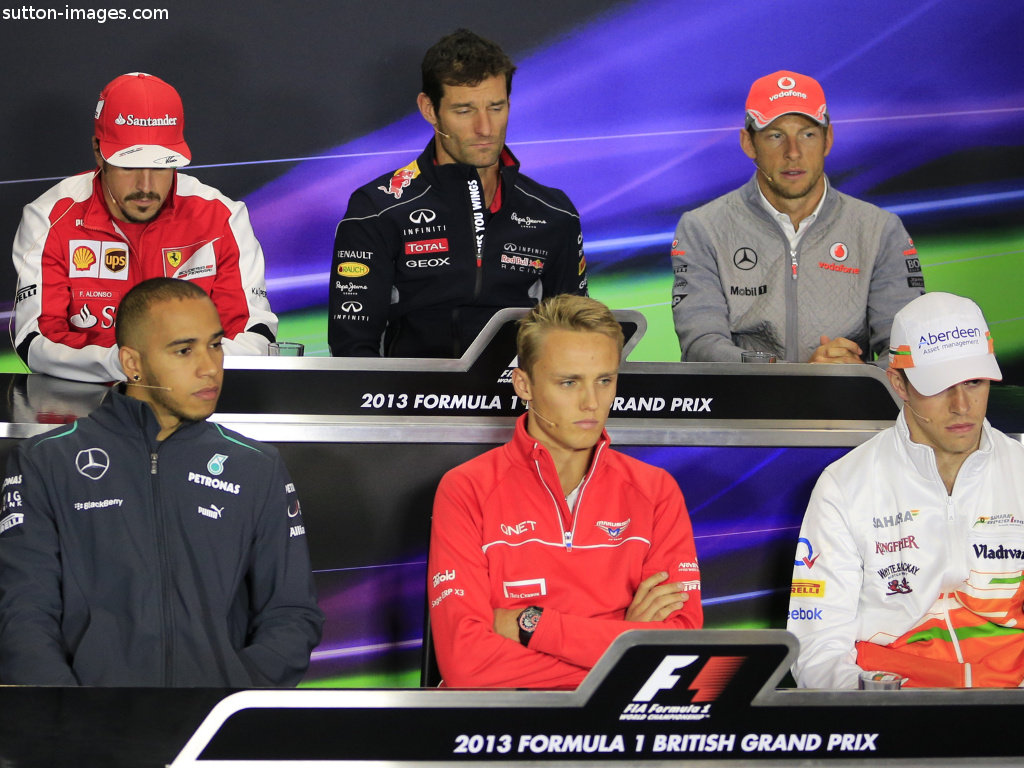 Q: Max, your first home grand prix, what are your thoughts coming up to this?

Max CHILTON: It’s an extremely exciting moment. To be racing in Formula One is amazing. In Australia, that grand prix was very special but this is the one I’ve been waiting for. To be in front of the home crowd, all the Union Jacks around the circuit. It’s going to be a moment not to forget. The main thing is to keep doing what you always do, not do anything different and just try to do the best that you can do.

Q: How do you think your progress has been so far this year? We’re at round eight, you seem to be making quiet progress back there.

MC: Yeah, I’m confident of how we’ve done. I’m finished all seven races and had a great race in Monaco finishing 14th. You’ve got to learn as much as you can in your first year of Formula One. I’ve felt like I’ve learnt everything that I can and I’ve learnt everything from every race and taken it into the next race. I’ll be doing that for all of the year and maybe next year – I don’t know what the plan is. You’ve got to take in as much as you can and try to take that into the next race and get a better result.

Q: Mark, a two-time winner here. What are the chances of another?

Mark WEBBER: It’s been a happy hunting ground around here, in Formula One and also, years before that in the junior categories. I think it’s one of the best circuits on the calendar. All the drivers love driving here. A Formula One car on the limit, all the quick corners. And yeah, the Red Bull car in the last few years has also been pretty strong here, so we’re looking forward to certainly challenging for another victory. Qualifying also, the last five years I’ve been in the top three here, so yeah, that’s been a good platform to launch a good result off. So, we need to have a smooth weekend and yeah, challenge for the last part of the grand prix. I think again tyres will be playing a very big role – as they always have done the last few years around here. Fernando was strong in Shanghai and in Barcelona – similar types of layout – so we need to be mindful of that, not that we can do much about it but we know we’re going to have some opposition this weekend, and looking forward to it.

Q: And a momentous announcement from you today. Tell us the thinking behind the announcement of your retirement from Formula One. And how significant is the year, 2013 to 2014?

MW: Well, the timing is perfect for me. Very, very excited about my new chapter and the new challenge ahead. One of the most famous and most well-respected brands in automotive and motor racing in Porsche, so that’s something which personally I’m very satisfied about taking on. The decision has been there for quite a long time for me actually. So, I’ve known for quite a while, I’ve had a plan and I’ve stuck to it. But still, in the meantime, respecting the profession that I have now at this level and focusing on achieving very, very strong results in my last season in Formula One.

Q: Was it the new engine regs? Did that have anything to do with it?

MW: There’s lots of reasons that come into the pot, I think, when any sportsman or women comes to that time in their career where they want to call it a day. That’s another small ingredient: there’s going to be big, big changes in this sport next year, so I may as well go and do those big, big changes where my future is going to be. Let’s see how the category is next year in Formula One – I’ll be interested to watch every now and then and go from there. Watch these guys do their stuff.

Q: Jenson, Fernando, you’ve raced against Mark for many, many years. What are your thoughts about the announcement today?

Jenson BUTTON: It leaves the seat free for someone else, doesn’t it? It’s not really a surprise. I think Mark’s career’s been a little bit similar to mine in a way in terms of struggling in the first few years to find a seat and a drive that you think you deserve and then being with a team that can give you victories. It’s obviously the right time so fair play to him.

Fernando ALONSO: Yeah, I think it’s a good time for him, good opportunity. As Mark said, he’s moving to a very prestigious car brand and probably the most famous race in the world – together with Formula One. I think he’ll have a lot of fun behind the wheel, as he’s doing now, with a little bit of less problems outside the wheel that we have now in Formula One. We enjoy 19 Sundays a year and the rest of the time is a little bit of a stressful time. With the new series I think he will have a little bit more fun and I wish him the best of luck for the rest of the championship and for the future.

Q: Coming to your own thoughts about these two races, this race and a week’s time in Germany, how important are these two races for your championship hopes, given the deficit that exists at the moment?

FA: All races are important from now on, especially in the position we are in. 36 points behind the leader, we don’t have much more room to do mistakes or lose many more points. But, on the other side, we need to remain calm, we need to do our job, the maximum we can every weekend. If we can win the race, if we can finish in front of Sebastian, will be great. If we cannot do it, we will try to lose the minimum points. Last year after Monza I think I have an advantage of around 40 points [39] over Sebastian and it was not enough – and that was Monza time. So now being in the race for the championship 36 points behind. It’s not the ideal position but it’s not the end of the world.

Q: The car was on pole position here last year, you finished second. How well is this car suited to Silverstone?

FA: We’ll see. I think it should be a good circuit for us. We’ve been more or less competitive here for the last three or four years. As Mark said before also, it is the first circuit that is a little bit similar to China and Barcelona – the best circuits so far for this year’s car and we have some high hopes for this weekend. On the other hand, Red Bull has been quite strong, and dominant here from 2009 so it will be an extremely close and challenging weekend with Mercedes I’m sure very, very strong as well, as they proved in China and in Barcelona with the first row in qualifying etcetera. So, y’know, interesting weekend ahead of us but we approach it with confidence, knowing that we have a good opportunity.