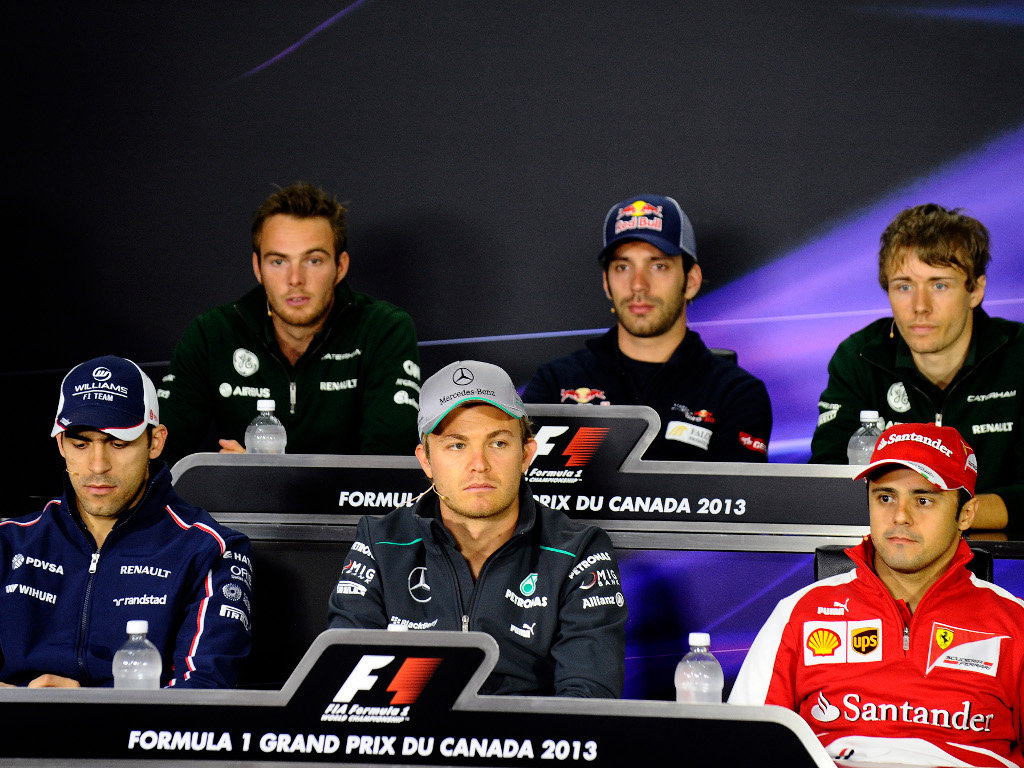 Q: Charles, your second Formula One season, now of course with Caterham. What are your feelings about that? Do you feel that you’re making progress yourself now that you are in your second season?

Charles PIC: Yeah, of course. The first races were a bit difficult for us and then from China and Bahrain especially we made steps forwards and the car was working much better and I think we are still in this positive mood. We have to keep working like that. Monaco was not an easy one for us. I think the pace and performance was quite good, especially in the race, but then we had this issue with the gearbox. Overall I’m happy with the evolution we have had.

Q: To some extent you are the team leader, in that you have more experience than Giedo. Is the progress with the car being driven by you?

CP: No, I think when you do progress it’s driven by everybody in the team. It’s a team effort and teamwork, driven by the two drivers and all the team.

Q: Jean-Eric, you’ve already had a busy morning. What have you been up to already today?

Jean-Eric VERGNE: I was at the Polytechnic school, with the FIA for the Action for Road Safety campaign and we had a bit of a chat with the students about safety, the Golden Rules and it was nice. I drove a simulator, so yeah.

Q: Well, you obviously had a very good qualifying in Monaco and followed it up with a good race, it was the fourth time you’ve finished eighth in a grand prix. The question is whether the car is suited to here and can you carry over that performance to here?

JEV: Yeah, hopefully. Everything can happen in Canada. Last year wasn’t really a good race for me but you know I think we can carry on the momentum. Definitely the car is getting better and better every race. We obviously don’t have anything new here but I think the whole package that we have is good enough to make a good race again here. I think the improvement on the car is going to continue for the whole season and I’m really pleased with that.

Q: And the improvement with you in qualifying, that’s important?

JEV: Definitely. You know, you need to work really well during the whole weekend and to have a good qualifying, especially in Monaco, is really important. I think I’m just improving race by race, it’s as simple as that.

Q: Giedo, a good performance again in Monaco. Here we are at another temporary circuit, but a circuit you don’t know. Can you carry over that performance from Monaco to here?

Giedo VAN DER GARDE: We’ll see by Saturday. I think so. The progress is going quite well. We knew that our first four races would be tough but the last few ones we made good progression. The relationship with the team is getting better, the work relationship is good, so I think we can do a good job here again.

Q: You said earlier on in the year that you’d need probably a third of the season to find your feet. Are you finding your feet now?

GVDG: Yeah, as a rookie it’s not easy to come in and the first four races were just to learn as much as possible and now the progress is going really well, the relationship with the engineers is really well, with the whole team. So I’m a happy man at the moment.

Q: Again, this is a new circuit to you. Are you finding it difficult to learn circuits?

GVDG: We did some practice on the simulator and I like more or less always a street circuit, so let’s see how it goes.

Q: Pastor, a big accident in Monaco, any after-effects from that?

Q: We’ve had a third of the season. Are you seeing progress at Williams?

PM: Yes. I mean, it was quite difficult to understand the car since the beginning of the season. Especially from the first race. We’ve been fighting a lot to try to fix the problems. We fix the problems but they are not easy to show. We have been working very hard, 24hours a day in the factory, especially in the wind tunnel. The problems are coming from aerodynamic. We’ve been trying to make some progress. I think we understand now a bit more the car and hopefully this race should be much better for us.

Q: What difference should a new chassis make?

PM: The chassis is more-or-less the same. Just some new parts, aero parts. Hopefully we are going to solve… not all the problems… but have a step forward. We have been expecting that for some time.

Q: Felipe, we saw you last in a [medical] collar. And you also have a new chassis here. Tell us a little more about that accident.

Felipe MASSA: It was two accidents actually! It looks really similar, if you look from the television, but it was completely different accident. The first one, it was, I had… just locked the wheels, went over the bumps and then I went straight. I hit the guardrail first and then I went straight. And the second one, I had a failure in the suspension. It was two different accidents in the same place. It looks very similar but it was two different things. The good thing is that I’m fine. I just felt a little bit of pain on my neck after because two crashes on the same place, in the same direction, y’know? But it was just muscles and its fine. One hundred per cent fine.

Q: And no dent in your confidence?

FM: No. For sure no. One hundred per cent confident for here.

Q: How important is a good result here for Ferrari? Because it wasn’t a very good result in Monaco.

FM: Yeah, I think it’s very important. We didn’t have the weekend we expected in Monaco. Just looking forward to going back to a good weekend – for both: for me, for Fernando, for the team. I hope the car works well on this track and we can fight for another podium again?

Q: Nico, has the euphoria of Monaco finally worn off?

Nico ROSBERG: Unfortunately yes! It goes quite quick in this sport. Already a couple of days afterwards, the focus went completely to Montreal. I mean, first of all understanding what we did right and wrong in Monaco and then preparing for Montreal and trying to get the most out of this weekend.

Q: But you seem to be on a roll with pole positions. What chances?

NR: Yes, well, qualifying has been very good. Our car has been the quickest car in qualifying for quite some time now. So, as a speed, I think we just have a very, very fast car. So I’m confident I’ll be quite far up the grid again in qualifying here. It is a different situation a little bit here: it’s lower downforce so that could mix things up a little bit, different track and everything so we’ll have to wait and see – but qualifying should be good, yeah.

Q: It is a very different circuit in terms of demands;