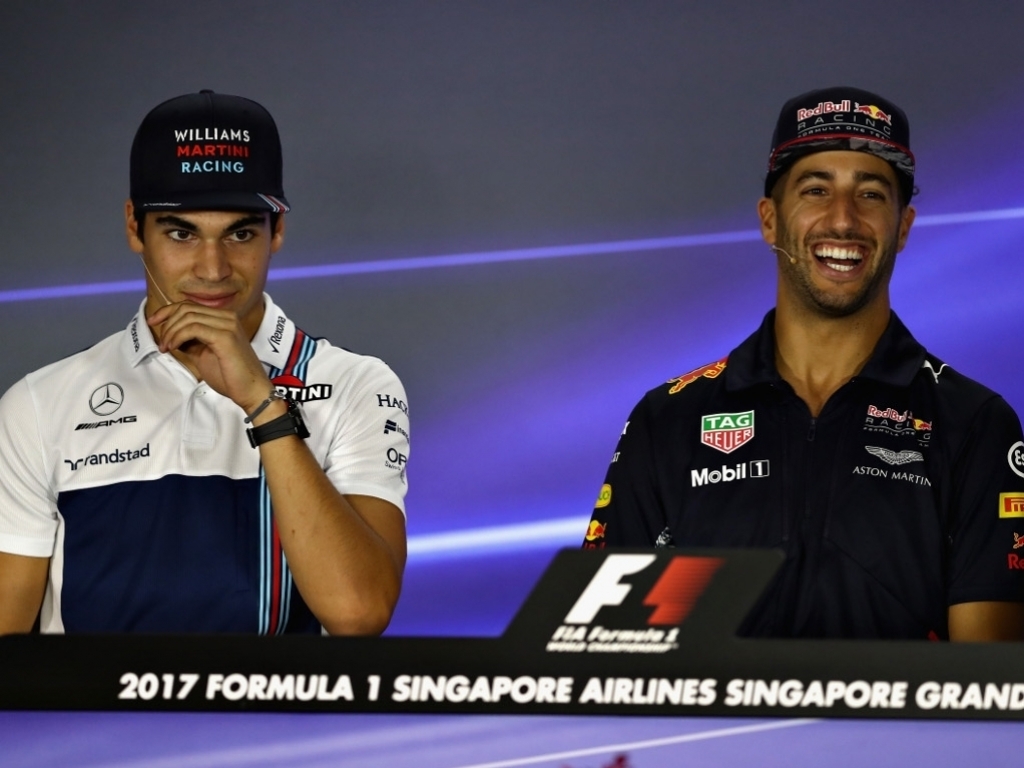 Q: Kevin, a good record here with points on your previous two visits. You and Romain both looked good in Monaco as well so is there some optimism at Haas this weekend, especially given the tight midfield points battle that you’re in?

Kevin MAGNUSSEN: Yeah, I’m quite positive about the weekend but to compare with… Monaco was quite OK for us but a lot of things have changed since then. Other teams have been developing, so have we but it’s difficult to say that we’re going to be as competitive. But we’ll see. I’m positive.

Q: We talked in part one of the press conference about the importance of qualifying here in Singapore. Amazingly, you’re the only non-Sauber driver yet to reach Q3 – without engine penalties I mean – so presumably that’s a massive priority for you this weekend?

KM: Yeah, it is. We’ve had the pace a couple of times but just had some issues with the car and reliability problems that meant that the times that we were actually strong enough to do it we didn’t do it. It’s not something I think about too much, it’s more the points that count for me. It is something that I would like to happen. I’ll let it happen when it does.

Q: Daniel, coming to you: new go-faster haircut is it?

Daniel RICCIARDO:  It’s pretty aerodynamic. I won’t take the top off. It’s a bird’s nest up there!

Q: Front row of the grid the last two years here at Singapore, last three years on the podium; does the car you have this year allow you to dream of more than that?

DR: I think so, I believe so. We’ve certainly got stronger and stronger and I think (that on) the high downforce circuits we’ve been pretty good but getting better. I think, also, looking at the last race, on the low downforce circuit we had really good pace on the Sunday which was a little surprise to us. With that, coming here, with a few updates as well, we should be there. It doesn’t seem like these sort of circuits, this year, are a strength of Mercedes either so I think it could bring Ferrari and us really into that battle. I hope, at least, it’s going to be a tight and exciting one.

Q: And looking ahead to 2018 and the question of progress, what progress will satisfy you next year?

DR: You know, we want to win, want to win and win more. We’ve fortunately got one this year. I believe we can win another and then obviously next year to start accumulating more and obviously fight for a title, that’s what we really want. Yeah, we’re certainly going in that direction, particularly since if I look back at Melbourne, that feels like another season ago. We’re in a completely different position so progress has been good, I think we’ve got to keep that going to Abu Dhabi and then make another step across the winter to start strong for 2018.

Q: Lance, youngest ever front row starter in Monza last time out and a solid run to seventh from there, how did you enjoy life in the fast lane and was seventh the maximum?

Lance STROLL: I enjoyed the weekend, it was a really solid weekend, Saturday, Sunday, especially Saturday, that was really the highlight of the weekend, if you ask me. In the wet was a good opportunity. We really pulled it out of the bag and that was great. I enjoyed that. I don’t think seventh was the maximum, no. I think fifth was possible with the pace we had. Unfortunately I got squeezed by Lewis at the start so I had to back out and I was kind of boxed in and Esteban managed to get around the outside of me so that wasn’t perfect. Again, the pit stop took I think 4.4 seconds so mathematically we were supposed to get in front of Esteban or at least have a shot, side by side, coming out of the pit exit but that didn’t happen and on top of it we lost a position to Kimi so it wasn’t a perfect race, we were pretty compromised being stuck behind Esteban throughout the whole race but again, that is racing, you do face adversity so it was still a great result and if we could continue scoring solid points like that, P7s, P8s until the end of the year I think we will be really happy as a team.

Q: On some tracks this year you’ve been right there from the get-go; is that just a question of feeling or is it something more technical than that and from what you know of Singapore, do you think this is likely to be another one?

LS: It’s a bit of both. It’s a combination of driving, feeling and the car as well. I don’t know here at Singapore. It’s a bit different everywhere. Generally, yeah, I quite enjoy street circuits: Monaco, Baku. It’s fun when there’s a consequence when you make mistakes, I think it makes it a bit more exciting. Obviously it’s frustrating when you do hit the wall and stuff, I’m not saying that but I quite like the buzz of being close to walls and the whole rhythm you have to get into on a street circuit. It’s always good fun so I’m looking forward to driving round here. Hopefully the car can be competitive this weekend. I know it’s not exactly our kind of track. We’ve seen over this season that low downforce, long straights, slower corners – that’s really been our strength and higher downforce we’ve really, really struggled. But I’m positive that with the whole team and everyone we’ve thought of solutions to improve that for this weekend. We’ve just got to what we do and see what happens.

Q: (Rik Spekenbrink – Algemeen Dagblad) What challenges and difficulties does a night race bring to you and do you prefer it over daytime racing?

DR: It doesn’t really change too much in terms of… you know the visibility here is really good. Some areas, maybe the light is a tiny bit more dim than others but it’s fine. Actually, I think during the night here it’s cool with all the city, the lights and all that, it makes quite a spectacle so… I think if we did the race in the day it would probably lose some of that so I’m happy driving here at night and I don’t think you’re compromised with visibility anywhere. It’s pretty well lit.

LS: My only experience under the lights was in Bahrain and I didn’t do too many laps in that Grand Prix. No, it should be really cool under the lights and the city all lit up. I think everyone really gets into it so I’m really looking forward to it.

Q: (Ysef Harding – Xiro Xone News) Daniel, earlier this year, at the beginning of the year, you released a clothing line of yours that you designed for the Australian Grand Prix and I’m wondering how’s it going? Can you give us an update on it and do you plan to expand on it? And you two, have you ever thought about the aspiration of the avenues of clothing, fashion design, to expand upon as athletes?

DR: Thanks for mentioning it, I’ll give you a free hoodie if you want one. We’ve kind of seen, over the last – whatever – couple of years, call it, there were a few requests coming in, I guess, from fans: will we ever bring out something for some fan merchandise, away from team stuff as well, more personal for a fan? We decided to do kind of a basic range for now and just keep it simple and see how it goes and so far it’s going good. I’ve got some fans, which is nice. We’ll see. Obviously if there’s demand we’ll expand it and create some more,  different, unique, probably more fashionable items but it was just to kind of keep it pretty simple for now and see how we… a real entry level and see how it goes. It‘s cool, today I saw some guys wearing the T-shirts and the hats and it’s fun so… What colour do you like? I’ll hook you up, it’s alright.

KM: Could do something. I see a lot of Danish people at the tracks always. I recently had an interview that some people created T-shirts with a quote from that interview and…

DR: What was the quote?

KM: I can’t even remember!

DR: You don’t remember it? Sure?

KM: Do you? OK. I’m not going to produce any of those T-shirts but could do something different.

Q: And Lance, what about you? There’s a fair bit of clothing knowledge in your family, isn’t there?

LS: Yeah, I don’t think so. Maybe, down the line. Play it by ear. Right now I’m good with my Williams fashion. It’s good at the race track but we’ll see, play it by ear. You never know.

Q: (Graham Harris – Motorsport Monday) Liberty are starting to engage much more on a digital basis and their own digital platforms; coming to social media for drivers, to the three of you, how heavily are you involved in social media? Do you do your own tweets, are you actively involved and do you see it as a way to engage fans and bring new, younger fans into the sport in the future?

LS: I’m not on Twitter. I’m all about the fan, don’t get me wrong, but I try to stay out of some of the noise in this world but for sure, I like Instagram and stuff, post a picture, people get to see what you’re getting up to, that’s always nice, but for sure, to expand Formula One across the world and give a bit of a view to the fans of what’s going on is always nice. It’s about balancing it out, I guess.

DR: It’s been good. I agree, I think it’s a balance. The good thing about it is we control it, I control my pages and we can put out what we want and keep what we want so that’s a good thing. We do control it. Some are doing more into their personal life than others. I think it’s good to keep some mystery still as well, not show everyone everything. I did something in Spa, like a time lapse of the race day, in my driver room so I’m sure hardly anyone had even seen my driver room before so that gave them a little insight. It’s not giving away anything but it’s just something unique. I like what F1 did in Monza; I think they put the GoPro on Lewis’s champagne bottle and sprayed that… so that was like a driver’s point of view of what standing on the podium’s like so little things like this. Even for me watching it, I was like that’s really cool so I can imagine a fan watching that, it’s pretty awesome. I think they’re doing great things and I think it’s only going to get better. For us, personally, as long as we stay in control of our own things then I don’t think there’s anything wrong with it or any danger of it getting out of hand so I think it’s pretty good.

KM: Yeah, I agree, I think there’s been a change for the good in what F1 is giving to the fans on social media etc and I think that’s very good.