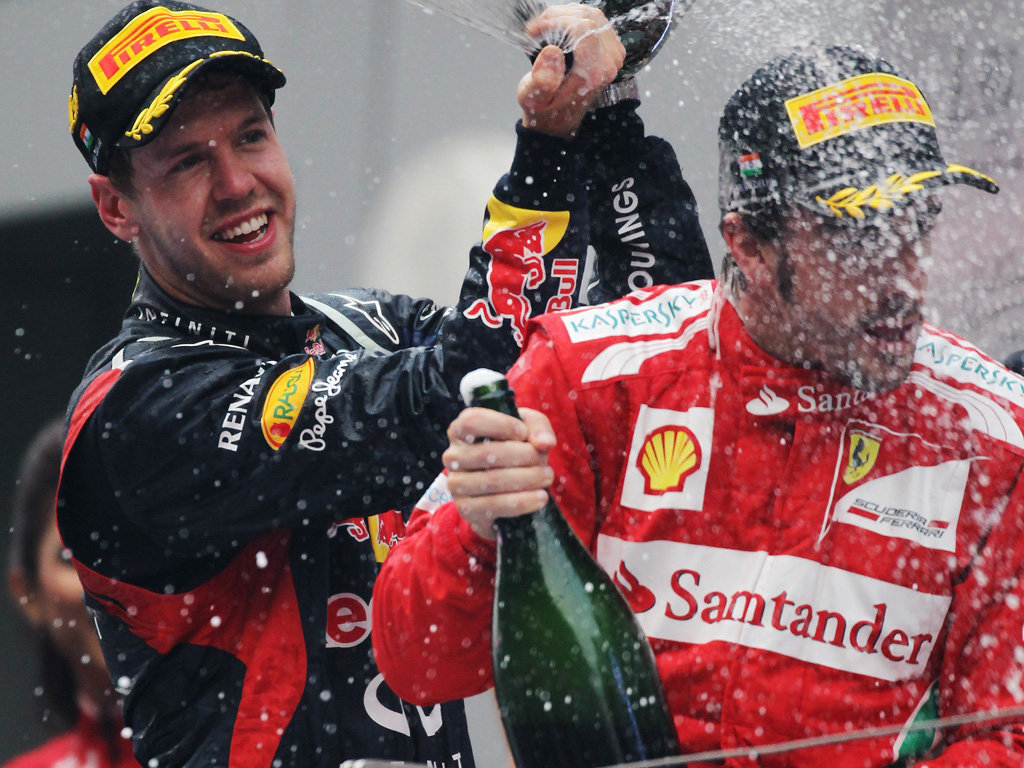 Heading into the final two races with a ten-point advantage over Fernando Alonso, Jaime Alguersuari believes that the title is Sebastian Vettel’s to lose…

Heading into the final two races with a ten-point advantage over Fernando Alonso, Jaime Alguersuari believes that the title is Sebastian Vettel’s to lose.

After pulling off an amazing recovery to come from a pitlane start to a third place finish in Abu Dhabi, Vettel retains a useful – but ultimately small – buffer to Alonso.

With the margins so tight, matters could change very quickly says Alguersuari.

“Alonso is 10 points behind Vettel in the championship going into the final two races of the season, which is a really small amount – the same as a fifth-place finish,” he wrote in his column for the BBC.

“The situation is not easy for either of them.

“Vettel knows his car is faster. Alonso knows he has to keep on playing his cards, doing his maximum and pressuring Vettel as best he can.

“If one makes a mistake and the other does not, that’s the end for them.

“Anything can happen. It is a question of bringing the car home and not making any silly mistakes, scoring the maximum amount of points they can and each trying to cover the other.

“But one thing is sure – Vettel has more to lose than Alonso. He is leading and he has a quicker car.

“Vettel shouldn’t lose it, but he could. All Alonso can do is win, because it already looks like he shouldn’t.”

The Spaniard paid tribute to his compatriot who has remained in the title fight despite not having the fastest car at his disposal.

“In Abu Dhabi Ferrari continued the good job they have done throughout the season. They made no mistakes on strategy or operation and Alonso yet again managed to finish the race in the best possible position,” he said.

“Everyone knows he is not fighting with the best tools. He benefited from Vettel’s penalty but it is amazing to see Alonso and the team working so flawlessly under such pressure.”