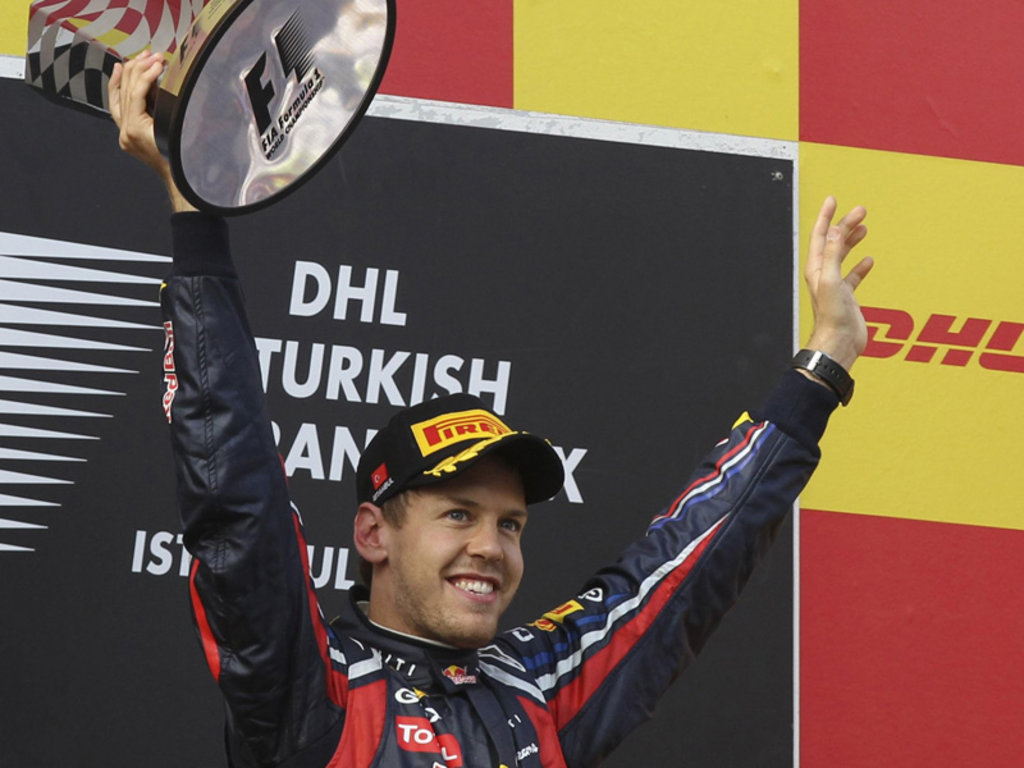 Seb Vettel was the big winner in Turkey as he put in a faultless drive while Petrov was an arse and Schumi out of his depth..

Star of the Race
Sebastian Vettel, Red Bull, Winner
Now Seb’s beginning to tease the opposition. As our GP report noted, this was a race where the strategy evolved by Vettel looking in his rearview mirror. The World Champion scored another immaculate pole on Saturday – untouchable by his team-mate. On Sunday he opened up a useful lead in the opening laps and from there it was all management – toggling between a three-stopper or a four-stopper and having the luxury of changing tyres after a seven-lap stint.

Overtaking Move of the Race
Lap 21: Jenson Button on Nico Rosberg
Button produced what will be one of the overtaking moves of the season to pass Rosberg around the outside of the final corner. He was following Felipe Massa through to overtake Rosberg at the end of the back straight at Turn 12 and both entered the sequence of corners together. Rosberg picked the outside of Turn 12 which gave him the advantage of the inside for the following corner. To stop Jenson diving up the inside of the final turn Nico then drilled his car straight for the apex, only to find that Jenson had driven round the outside of the final corner and outdragged him down the start/finish straight. It was a joy and a novelty.
Ultimately Button lost out to Rosberg. There was a time in the race that Jenson was in front of the Mercedes driver and could have stopped a fourth time to guarantee either P4 or P5 but failed to get either. Ah, hindsight.

Winners
Mark Webber, Red Bull, 2nd
Right now it’s as close to Seb as he’s going to get. He managed to claw his way back from a poor start. Just imagine what’s going to happen when they get their KERS sorted…

Fernando Alonso, Ferrari, 3rd
A huge step forward for Ferrari this weekend aided by a highly motivated Fernando Alonso. Fernando reckons that he lost the opportunity to go for the win because he was held up behind Nico Rosberg for too long. Which is a valid point. But he was also fortunate that Lewis Hamilton took himself out of the equation early on by challenging Mark Webber on the opening lap and running wide. The Ferrari looked distinctly faster than the McLaren in Turkey but it would have taken a few laps to prove it.

Lewis Hamilton, McLaren, 4th
It was good to see Lewis having a go at Mark Webber going into Turns 1 and 3 even if it didn’t come off. Now that the opening lap has become a game of percentages, Lewis stands out as one of the risk takers. His battle with Button was also fairly high risk, but like last year, they got away with it. And this time Jenson came out on top when they had comparable tyres.

Nico Rosberg, Mercedes, 5th
If Mercedes can continue their qualifying form they are going to be a thorn in the side of Ferrari and Mercedes in the races to come. They’ve obviously got a problem with blistering tyres, but Ross Brawn is happy with the blistering pace that goes along with it.

At the end of each race drivers are going to need to watch full replays to make any sense of what’s been going on around them. Rosberg thought he was going to be battling with the Renaults at the end and was pleasantly surprised when the clanking wheels of the strategy machine churned him out in P5.

Nick Heifeld and Vitaly Petrov, Renault, 7th and 8th
When Kubica and Heidfeld were together at Sauber they were nicknamed The Boulder Brothers (after the Wacky Races characters who took lumps out of each other). It looks like the spirit of the Boulder Brothers lives on at the Renault team. The cars took quite a few knocks on their way to the flag, but both survived.

Kamui Kobayashi, Sauber, 10th
He was almost put on the grass by that kindly old gent Mr.Schumacher, but he still carved his way through to a points place. And ahead of Michael.

DRS
One of the many unintended consequences of the Drag Reduction System (DRS) is that drivers are now being very dainty on their opening laps. Whereas in the past it was do or die on the opening lap because the chance to overtake wouldn’t come again, this year drivers are being very respectful. It’s good to see. In the last two races we’ve only had three retirements and one of those (Timo Glock today) didn’t even start the race.

For those who say that DRS is making it too easy, most of the ‘breezing past’ moments – such as Rosberg on Button, late on – were done where there was mis-match in tyre wear.

You only had to look at how Hamilton failed to get past Button for some time, or how long Alonso was stuck behind Rosberg to realise that it wasn’t an automatic pass. The Istanbul circuit has a sequence of corners after the DRS zone that allows drivers to continue overtaking moves they couldn’t quite finish on the back straight.

For those who think that overtaking is too easy, rest assured, the Circuit de Catalunya is next and you won’t be disappointed by an excess of wheel-to-wheel action through series of corners.

Arse of the Race
Whereas the debate raged between Alonso, Vettel and Kobayashi for the Star of the Race, the donkey ears were easily awarded to Vitaly Petrov for a move straight out of the Andrea de Cesaris handbook.

It takes a rare combination of skills to see your team-mate trying to overtake you, to then bash into him and almost push him down the pitlane entry road and to take you hand off the wheel and gesture towards him at the same time. Vitaly looks a little like that strong-arm politician Vladimir Putin and you can imagine the Russian Prime Minister producing the same kind of response to any internal opposition. Though, ‘Down the pitlane with you’ is fairly mild compared with some of the political solutions of the past. If we find Heidfeld in a gulag, we’ll know why.

Losers
Race Stewards
Yet again more worrying inconsistencies from the stewards from race to race. When Fernando Alonso was pulled in for losing his front wing against Lewis Hamilton’s rear tyres in Malaysia we said it was going to make for a busy season… if this was going to be the kind of thing they were now picking up on.

So why wasn’t there an investigation about Schumacher losing his front wing against Petrov on Lap 2? That was also a collision where a front wing was lost and the main protagonist lost out.

From a racing incident point-of-view there was no need with Schumi. As he admitted afterwards, it was more his mistake than Petrov’s and he paid the price. There was no call for any kind of steward intervention; it was the right decision. But the stewards in Malaysia had set a clear and unambiguous precedent to investigate these kind of collisions, so why haven’t the FIA followed it through?
For the Massa pitlane release early on in the race, Hamilton was well within the zone where it was dangerous to