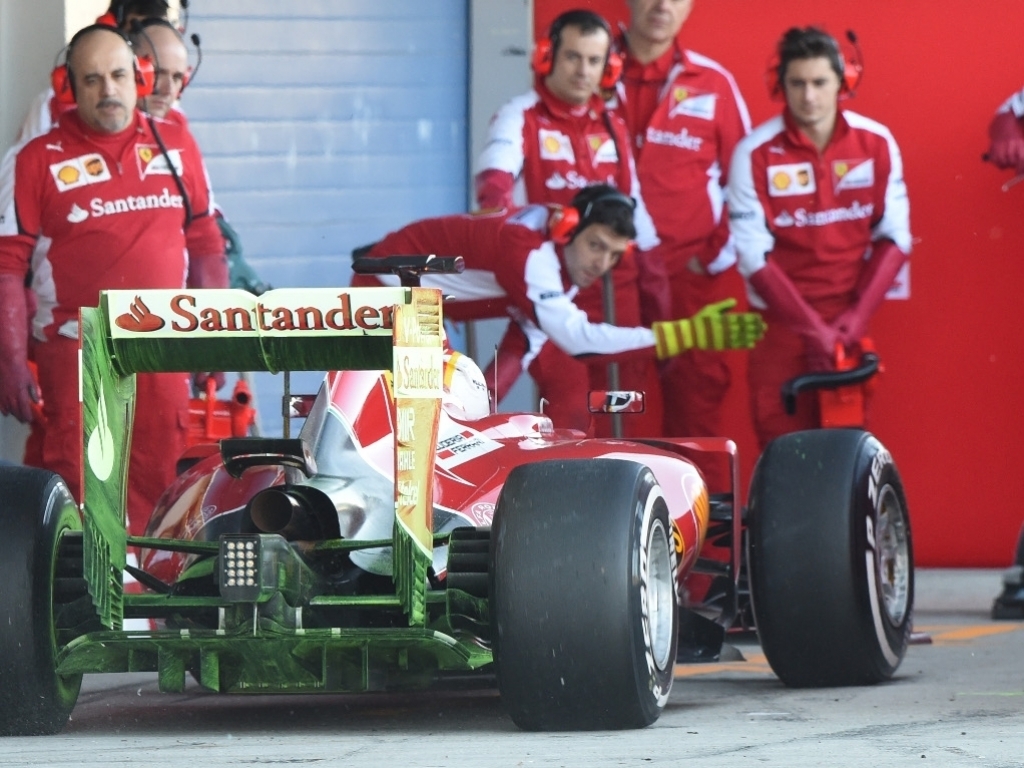 Sebastian Vettel finished in P1 for the second day running as Lewis Hamilton's Mercedes showed its first sign of weakness at Jerez on Monday.

Vettel, who was back in the Ferrari SF15-T for a second day, proved to be the man to beat at the Spanish circuit.

Out on track during the morning, a spate of quick laps saw Vettel lower the benchmark time to a 1:20.984.

That time proved unbeatable as drizzle later in the afternoon, which deteriorated into a rain shower, put paid to drivers upping the pace.

However, minutes before the rain came down in earnest, Sauber rookie Felipe Nasr posted a 1:21.867 to jump up to second on the timesheets.

The Brazilian was the only driver to get within a second of Vettel's P1 time as Valtteri Bottas in third was 1.335s down.

Hamilton finished his day in fourth place having sat out part of the afternoon.

A "water leak from a failed part" on his Mercedes W06 meant he was not able to match team-mate Nico Rosberg's 157 laps from Sunday. Hamilton finished with just 91.

Max Verstappen was fifth in his STR10 as the rookie racer finished the day with a 1:24.167. He, Nasr, Jenson Button and Vettel were the only drivers to venture out in the rain in the final hour of testing.

It was a day good – relatively speaking – for Lotus. Not present at the circuit on Sunday, they joined the fray on Day Two with Pastor Maldonado behind the wheel of the new E23.

Slowest of those who set a proper lap time, the Venezuelan driver managed 41 laps on the day. It could have been more if not for his red flag in the second to last hour of testing.

Maldonado's car broke down – a "drivetrain related issue" – as he headed back into the pits which made it easy for the marshals to give him a push back in before his Lotus mechanics took over.

His day, though, did at least consist of more running than over at McLaren and Red Bull Racing.

While the Woking team and new engine partner Honda only added a further six laps to their Jerez tally, which is now up to 12, Red Bull's day consisted solely of one-lap runs.

Newly promoted Daniil Kvyat had a "slight off" in the morning which damaged his RB11's front wing. As that was the only wing Red Bull had on hand at the circuit it seriously hampered his programme.

The Russian driver still ventured out, doing 18 one-lap runs, and all without a front wing attached to his car.

Gallery: Soaking Up The Sun At Jerez