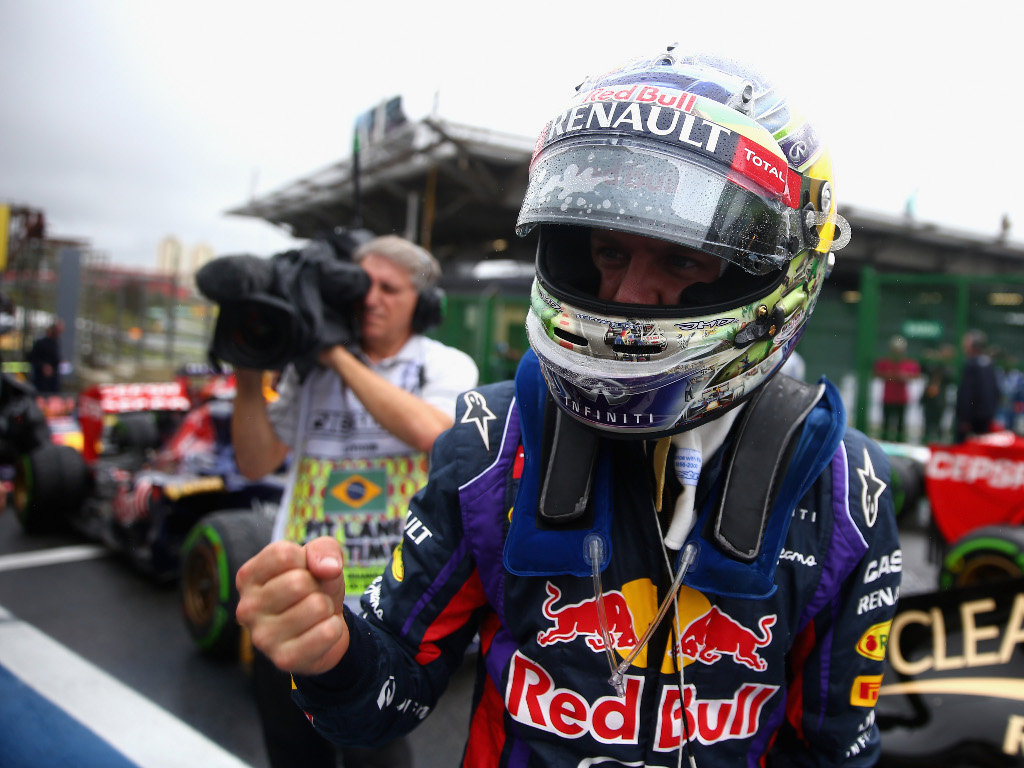 Sebastian Vettel says his 0.6s advantage over Nico Rosberg in qualifying for the Brazilian GP was a “big surprise”…

Sebastian Vettel says his 0.6s advantage over Nico Rosberg in qualifying for the Brazilian GP was a “big surprise.”

The four-time World Champion arrived at the Interlagos circuit for this weekend’s Brazilian Grand Prix seeking an unprecedented ninth straight victory in one season.

And the German took a massive step towards that with his ninth pole position of the campaign.

Following a 40-minute delay caused by the bad weather, the drivers ventured out on the wet tyres only to pit for intermediates.

With Pirelli’s green-walled tyres onboard, Vettel posted a 1:26.479 which put him a massive 1.1s up on his team-mate Mark Webber, who had been holding down second place at the time.

“A big surprise,” said the Red Bull racer when asked about the gap to second, “I was so happy after qualy especially Q3 where it took a long time for us to get out.

“When we got out and I was surprised how much of the water had gone and went straight onto the intermediates.

“I got a good lap straight away and then I tried again on the second to beat that and was very close so I’m happy with both my laps.

“I was surprised by the margin and when I was told I was very happy.

“It’s great in these conditions to get it all right, we had very little practice but still got the car where we wanted it to be.”

The German also spoke out in support of the decision to delay the start of Q3 as the standing water on the track was too dangerous for the drivers.

“There was a lot of rain after Q2 – already at the end of Q2 – so we needed to wait if there is too much water on the track,” he said.

“It’s a shame for people who come out but there was too much water and the risk of aquaplaning was too high.”