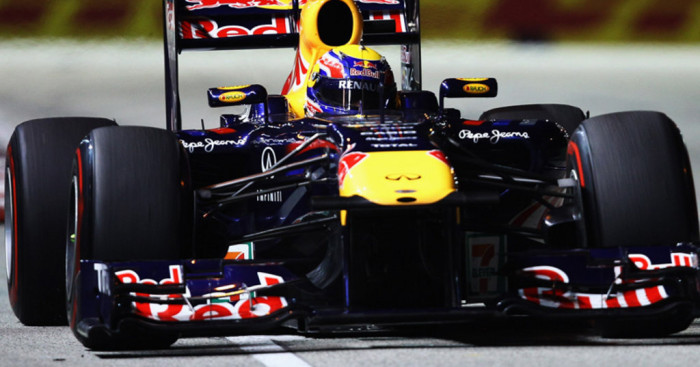 Mark Webber says he has no complaints with his second place grid slot for Sunday’s Singapore GP after once again losing out to his team-mate.

Early in Q3, Vettel put down a benchmark time of 1:44.381 and it soon became apparent that none of his rivals, not even his Red Bull team-mate, could beat it.

Webber came the closest but was still 0.351s slower than the German.

However, the Aussie says he happy with his performance especially as in past seasons he has struggled at the Marina Bay circuit.

“I’m pretty happy to be honest,” he said. “It’s been a pretty testing venue for me in the past, particularly on Saturdays.

“Seb obviously laid it down pretty hard and fast for all of us, he’s very quick around here and he did a great job for the pole.

“I think maybe he saw my data, there were only a few corners where I was a little quicker, maybe in the chicane he was trying to put it all together but obviously he was very quick for the whole lap!

“Like he said to put it all together, it’s really difficult for all of us here. It’s very easy to grab a bit more and then lose a bit on the next straight, so overall I’m satisfied given the curve balls that the teams can face here. Both cars up there is a great result for us.”