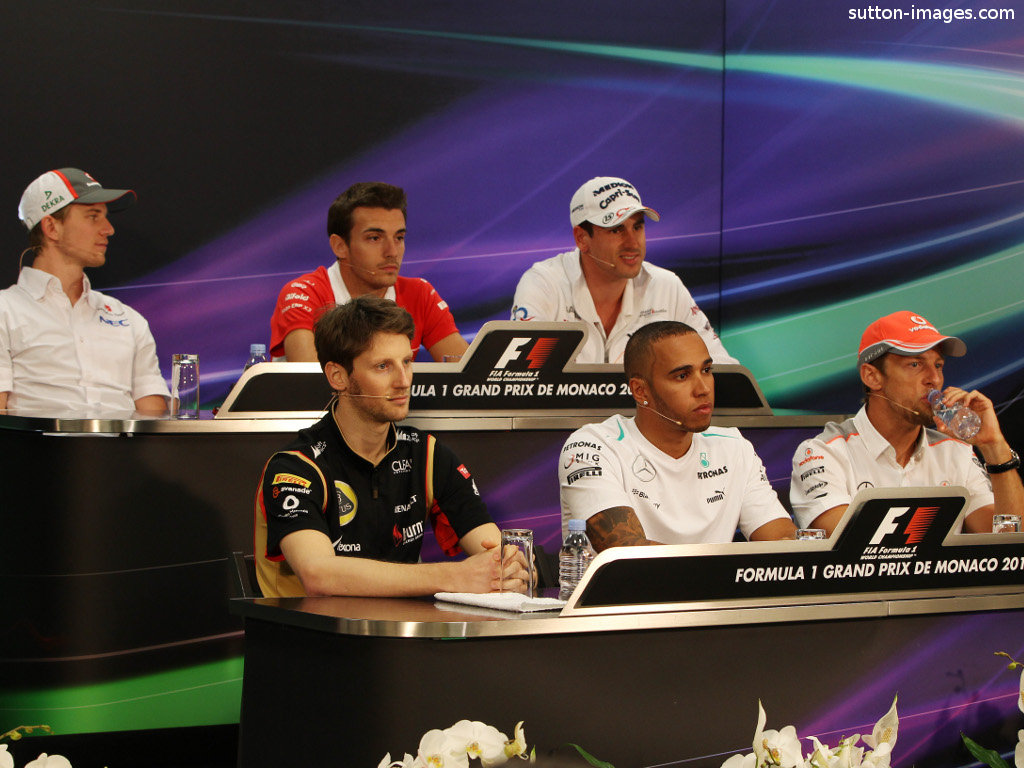 Q. A question to you all. Round six of a 19-race season coming up, the same points are up for grabs as any other grand prix. It’s just another race… or is it? Is Monaco the greatest race of them all?

Jenson BUTTON: Good afternoon. Is it the greatest of them all? I don’t know really. I think they’re all pretty special in their own right. Some of them have more history than others and Monaco is definitely one of them. A lot of us also live here, so it’s a very special race. But I think if you’ve had the opportunity to fight for a win and actually cross the finish line first, it’s a very special race, yeah. You feel as though you celebrate that win, obviously with your team, but also with everyone watching here, because it’s such a confined space. It’s a very special place to win. But there are so many other races that mean a lot to us and certain races that mean more to us as individuals than Formula One as a whole.

Q. What about you Adrian – greatest race, or will it be when you finally get a good points-scoring finish?

Adrian SUTIL: It could be, yes, definitely. But I feel this as a normal race. Like every other race really. You try to the best possible. In a way it’s a bit different because you know from the past and from experience that there are more possibilities out there. It’s a very tricky circuit, unforgiving and easy to make mistakes, [see a] safety car. The risk is high here and that opens up some situations for you… it can work well for you or the other way. Having that in mind gives a nice race, a nice weekend. Starting last or starting at the front doesn’t mean you will win the race. It’s all up [for grabs]. You need to be on the point and just stay focused for the whole race, until the race is finished.

Q. What about you Jules? You’ve raced here before, not in F1 of course but it’s like your home race. How up for it are you?

Jules BIANCHI: Yeah, of course I’m really excited to be in the car tomorrow. I think this race is special for me because I was born in Nice, which is not really far from here. It’s like a home race, as you said. I can’t wait to be in the car even if I know it is a tricky track. It’s not easy to be quick here. But anyway I had some good records in the junior categories so let’s see what we will do.

Nico HULKENBERG: Like Adrian said, the approach is the same to every other grand prix. It’s definitely special. I’ve never won here. I’ve been on the podium in GP2 and that was certainly. Even in F1 to achieve a podium here or even a win would be special and I think it stands out a bit more than a normal grand prix let’s say.

Q. Romain, another man for whom Monaco Grand is also a home race.

GROSJEAN: Yeah sort of. Monaco is not France but basically it’s not far. A special race, with a special podium as well at the finish, when you get meet the Prince, which is nice. There’s 25 points, as every other grand, but I think Monaco is a special one to me.

Q. Lewis, how special is this place?

Lewis HAMILTON: Good afternoon everyone. Yeah, Monaco is spectacular. As Jenson said, a lot of us live here. I don’t feel like it’s like any other race. Winning here is unique and special, in its own way. When you do win here, when you finally get that, you have the most incredible feeling. Every time you come here that’s what you’re chasing for every year.

Q. Jenson, before we came to Monaco, news that Honda are returning to Formula One as engine suppliers to McLaren in 2015. What was your reaction to that news?

Q. Was it good news for you personally? You had quite a long association with Honda before?

JBu: I’ve got a lot of connections to Japan and Honda is one of them. I spent a lot of time working with them in the old days… it seems like a long time ago now, but a lot of very positive moments and I look forward to that in the future. But it’s a long way down the road still so we’ve got to focus on what we’re doing now at the moment, with Mercedes and in 2015 it will change.

Q. This season, Adrian Sutil, started really well for you in Australia. Since then things haven’t gone quite your way. Do you think you’re suffering a huge amount of bad luck at the moment?

AS: There’s no good luck and no bad luck for me. It’s just certain things happen and then you have to get behind it and see where the problem is. Many problems we had… small, but they turned out to be absolutely important for the race. A little wheel nut in Barcelona, which was a problem and it caused a pit stop which was almost a minute long and the race was over – no question. It was very impressive how quick the car was again. The race speed was very good, and the pace. So, it’s good to know the car is fast; the package is fast. It’s like the little piece of the puzzle we need to put together. The most important thing: the problem we had, we solved it. It was a different problem to Malaysia. It’s just a question of time that I will have my results. I will not give up. I will fight hard for it and try to also be clever and make a good result soon.

Q. Jules, a lot of people are talking about you and paying you quite a few compliments given your start to Formula One. How would you assess the opening five races of your Formula One career?

JBi: Well obviously it’s been a really positive start for me – and for the team as well. Trying to do the best result that we can. We know it’s difficult, we have to be realistic – we won’t score… well, it will be difficult to score points for us. So, just trying to do our best, trying to push as hard as possible and yeah, the first five races has been really nice. Some improvement on the car, some improvement with myself, so I’m really confident for the next fourteen races.

Q. It’s been a good battle between Caterham and Marussia. The last couple of races Caterham seem to have had the upper hand. Will that change this weekend?

JBi: I’ll try my best to do it, yeah for sure. Caterham are a bit in front but we saw in Barcelona that we were a bit quicker in the race pace – so that’s positive for this race. Anyway it’s a bit special