Home Uncategorized What The Papers Say About Britain 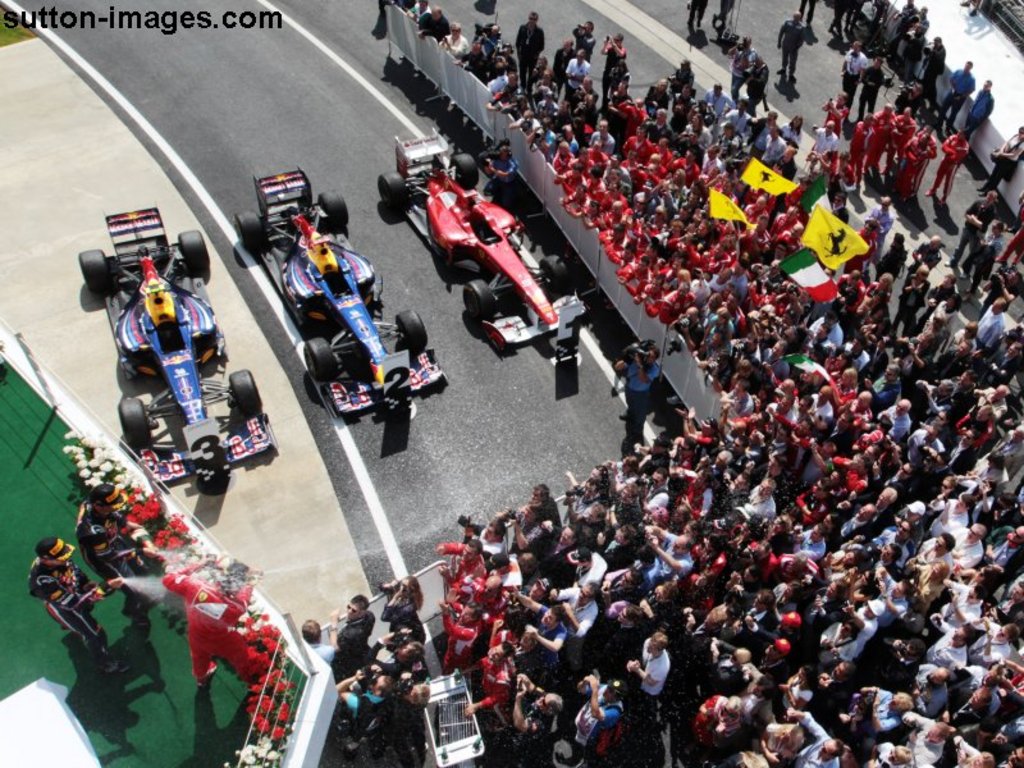 ‘Fernando Alonso won his first grand prix for nine months with the 27th victory of his career as Ferrari continued to improve their competitiveness. It was a memorable way for Ferrari to celebrate the 60th anniversary of their first win here.

‘It was the Spaniard’s first victory since his win in South Korea in October last year. But the real thrills were taking place behind him, with Red Bull team-mates Sebastian Vettel and Mark Webber battling it out for second place and Lewis Hamilton coming under increasing pressure from Felipe Massa.

‘Vettel, who still managed to increase his lead in the world championship table by three points to 80, did hold off Webber to take second. But despite saying in the past that the two drivers were free to race, Red Bull gave Webber the chilling message on the last lap: “Mark, maintain the gap.”

‘Webber though, appeared to ignore the message and continued to race Vettel until the end of the race.

‘Hamilton had a brilliant afternoon. Starting in 10th place, with a car well off the pace over the weekend, he charged up the field, overtaking Paul di Resta to take sixth place, before moving up to fifth by passing the other Briton in the race, his team-mate Jenson Button. He eventually finished fourth.

‘But it was another difficult day for McLaren. Button, making his 12th attempt to win a podium place in the British Grand Prix, failed to finish, retiring after a pit-stop mistake resulted in his front right wheel almost falling off.’ – Paul Weaver, The Guardian

‘The portents did not look good for Fernando Alonso as the Ferrari double world champion jogged down the pit straight, trying to catch the low loader ferrying his fellow drivers on their pre-race parade around Silverstone.

‘Flanked by photographers, ironic cheers ringing in his ears from the British fans, Alonso needed to hitch a lift with the medical car to catch up with his counterparts.

‘But behind the wheel of his Formula One car, nobody was catching the Spaniard yesterday as he became only the third driver to prevent Sebastian Vettel taking the chequered flag this season.

‘That Alonso was late for the customary lap-long wave to the fans was because he had already been entertaining them by circumventing Silverstone in a priceless Ferrari 375, which happens to be part of the private collection of Formula One supremo Bernie Ecclestone.

‘It is the same model that, 60 years ago at Silverstone with Argentine Jose Froilan Gonzalez at the wheel, registered the Italian marque’s first grand prix win.

‘For much of this season it could probably have given Ferrari’s latest creation a run for its money.

‘That was until Alonso decided the diamond anniversary should be celebrated in style by registering Ferrari’s 216th victory.’ – Simon Cass, The Daily Mail

‘This time 12 months ago, Fernando Alonso raised eyebrows by predicting boldly that he would win the drivers’ title despite finishing the British Grand Prix 14th and dropping to fifth in the title race, 47 points behind then leader Lewis Hamilton.

‘The Spaniard proceeded to go on a rampage, racking up four grands prix victories in seven races to enter the final-day showdown in Abu Dhabi needing fourth place to be sure of winning his third world championship. Only a catastrophic strategy call from his team cost him.

‘After winning Sunday’s race at Silverstone, six decades after Ferrari’s maiden triumph at the former Second World War airfield, speculation is rife that the Spaniard may be about to embark on a similar run.

‘Ferrari’s resurgence in recent weeks has crept up almost unnoticed but the suggestion is that Alonso’s pace – he won by more than 16 seconds from Red Bull’s Sebastian Vettel – was down to more than the controversial change to engine regulations introduced at Silverstone.

‘Ferrari remained silent throughout the row over ‘off-throttle’ blown diffusers – which involves blowing exhaust air over the rear of the car even when the driver’s foot is off the accelerator – leading observers to suspect not only that they were happy with the change but that they lobbied the governing body to introduce it.

‘The fact that they were one of only two teams who opposed returning to the pre-Silverstone regulations merely reinforced that suspicion.

‘Their acquiescence on Sunday night, meaning we will now return to full ‘off-throttle’ blowing from the next race in Germany next weekend, suggests they may not be so dependent after all. Ferrari, the most powerful team on the grid, are not in the habit of backing down over anything which overtly favours them.

‘Instead, the feeling is that their improved pace relative to Red Bull may have derived from the aerodynamic upgrade package which they brought to Silverstone. Alonso, who has now taken 43 points out of a possible 50, was certainly encouraged.’ – Tom Cary, The Telegraph

‘No, we didn’t get an exactly contrite Lewis Hamilton, give or take a few platitudes.

‘These came when he larded some distinctly acerbic exchanges over the team radio with the concession that at least, and at last, he had been given a car a little more worthy of his ability to drive it with exceptional flair and spirit.

‘The fact is that if we had wanted to find a world-class sportsman possessing any less in-built humility than the 2008 world champion we would have had to send out the tracker dogs at dawn without any guarantee of success. And this was despite the presence at Silverstone of Ian Poulter, the highly ranked English golfer who not so long ago declared that he was the most likely man to separate Tiger Woods from sole possession of the mountain top.

‘Hamilton even cracked that he now has a platinum card priority pass for his routine attendance at stewards’ inquiries, though no one was suggesting that his late collision with recent critic Felipe Massa was anything more than a “racing incident”. Furthermore, it came at the end of one of those duels which make the endless politics and arcane engineering controversies of Formula One an almost acceptable price for such sure-fire surges of the blood.

‘This, indeed, was the best of Hamilton. He may not have the most embraceable manner, in either triumph or defeat, but no one ever said he wasn’t a superb natural born racer.

‘Yesterday his triumph was to turn back a tide of reproach, and even the suspicion that his temperament was simply not up the inevitable frustrations of a business where sheer driving talent is so often thrust into the margins of winning and losing, and produce a supreme example of why he has long been considered worth all the trouble and exasperation.