Home Uncategorized What The Papers Say About Canada 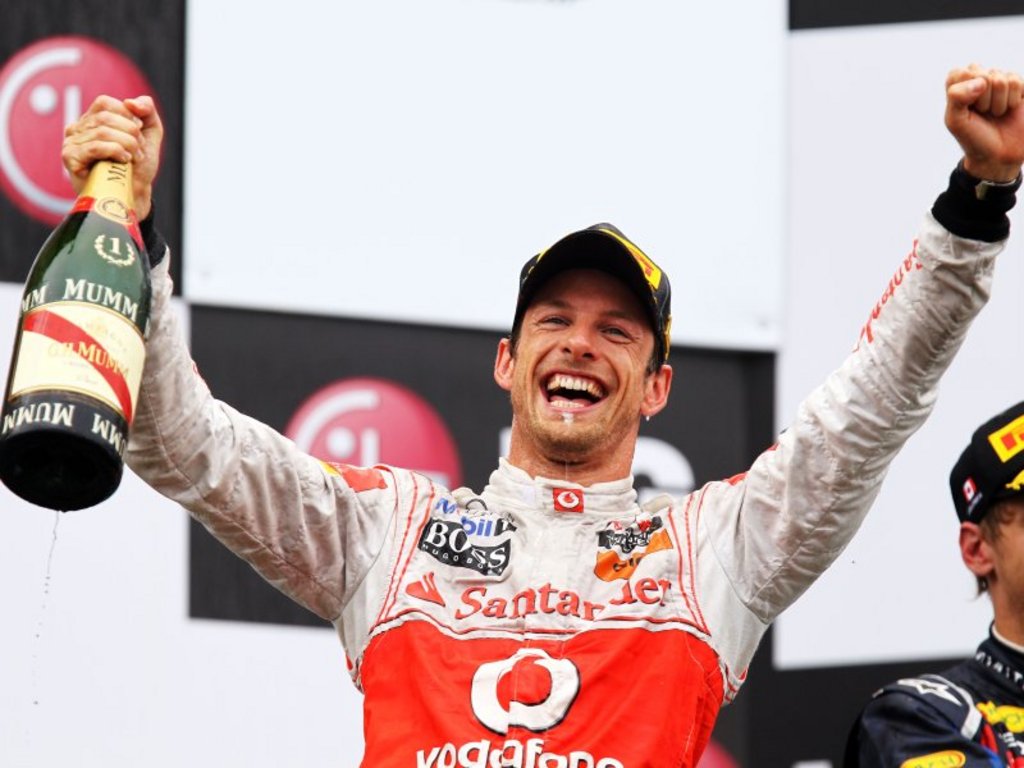 ‘Jenson Button always insisted he had no intention of throwing in the towel in the title race and – despite crashing into his team-mate, a collision with Fernando Alonso, the wild Montreal elements and six visits to the pits – he became the first driver this season to make Sebastian Vettel crack under pressure.

‘He left it late, seven corners from the chequered flag in a race which lasted over four hours, included a red flag and five safety car deployments.

‘But having endured all manner of misfortune before reeling in Vettel and having fought his way back through the field from as low as 21st place, Button simply was not to be denied.

‘Whether this can be the catalyst for the 2009 champion to start making serous inroads into Vettel’s lead remains to be seen, his win moved him into second place in the standings 60 points behind the current title holder.

‘But one thing seems certain, amidst a torrent of criticism every bit as heavy as the rainfall which fell on Montreal, Lewis Hamilton is not looking like the McLaren driver best placed to give Vettel a run for his money.’ – Simon Cass, The Daily Mail

‘When silence was finally restored to a small island in the St Lawrence River here , a little over four hours after the start of the Canadian Grand Prix, Jenson Button had won a breathlessly chaotic, almost surreal race, his first victory since last year’s Chinese Grand Prix 14 months ago.

‘Peace, though, would take a little longer to arrive, for as the chequered flag fell there were more investigations pending than can be found in the complete short stories of Sherlock Holmes. And rancour, too, hung in the damp and sullen air.

‘Victory, perhaps, should have gone to the safety car, for it appeared to dominate the afternoon, while at one point it seemed that it would be most appropriate if the podium was ascended by the red flag wavers, who attracted most attention and who stopped the race for over two hours, consigning the Antiques Road Show to the BBC’s pit-lane.

‘Ultimately, though, we had a thrilling climax and a breathtaking drive by Button, whose 10th victory was all the sweeter for the fact that his collision with Lewis Hamilton had consigned his team-mate’s race to a watery grave.

‘Button also tangled with Fernando Alonso, who like Hamilton did not finish the race. Button’s appointment with the stewards after the race half-placed a restraining arm on his celebrations.

‘Button came from last to first, sweeping past Sebastian Vettel, who spun his car under pressure, halfway through the final lap to end the German’s recent hegemony. This was a vintage drive by the champion of 2009, cutting through the wet with verve and determination. He replaces Hamilton in second place in the championship table, though 60 points behind Vettel.’ – Paul Weaver, The Guardian

‘A truly extraordinary Canadian Grand Prix, lasting almost four hours due to torrential rain and five safety cars, ended in the most dramatic fashion imaginable, with Jenson Button – having pitted six times during the race – coming through on the final lap for victory.

‘Button shrugged off a collision with his own team mate, Lewis Hamilton, to take his first victory since April last year from Red Bull’s Sebastian Vettel, who nevertheless extended his lead in the championship to 60 points. Vettel’s team mate Mark Webber held off a resurgent Michael Schumacher to take third.

‘The embattled Englishman (Lewis Hamilton)had earlier reignited the debate over his attacking style by getting involved in three separate incidents inside the first eight laps of the race, the last of which saw him collide with McLaren team mate Jenson Button and retire.

It was a massive blow for the embattled Hamilton given his deficit to Red Bull’s championship leader Sebastian Vettel, which already stood at 58 points before yesterday’s race.’ – Tom Cary, The Telegraph

‘Jenson Button made sensational reparation to his McLaren team for inadvertently taking team-mate Lewis Hamilton out of the race early on by snatching victory in a chaotic, rain-delayed Canadian Grand Prix in Montreal from long-time leader Sebastian Vettel halfway round the final lap.

‘The race began behind the safety car due to heavy rain, and it did not take Hamilton long to find trouble as he tipped Mark Webber’s Red Bull into a spin in the second corner. That attracted the attention of the race stewards but if McLaren thought that was bad news, they had no idea what was in store.

‘Hamilton dropped back behind Button when an attempt to pass Schumacher on the hairpin backfired, but going past the pits on the seventh lap he drew up behind Button again and moved to the left to overtake. His right front wheel was level with Button’s left rear when Button moved over, and in a flash every team principal’s nightmare became reality as the two silver Vodafone cars collided. Hamilton’s smacked the pit wall hard, and his race was immediately over.

‘Button in the meantime had survived a collision with Fernando Alonso, which spun the Spaniard out and damaged one of his front tyres, but after dropping to last place he charged back up to fourth place in a simply brilliant recovery. He faced an investigation by the stewards afterwards for the collision with Alonso, however, and for the safety car infringement.

‘After dispensing with Webber and Schumacher by using his drag reducing rear wing, he set off after Vettel and snatched the lead on the last lap as the German slid wide after getting off line in a chicane.’ – David Tremayne, The Independent