Home Uncategorized What The Papers Say About Hungary 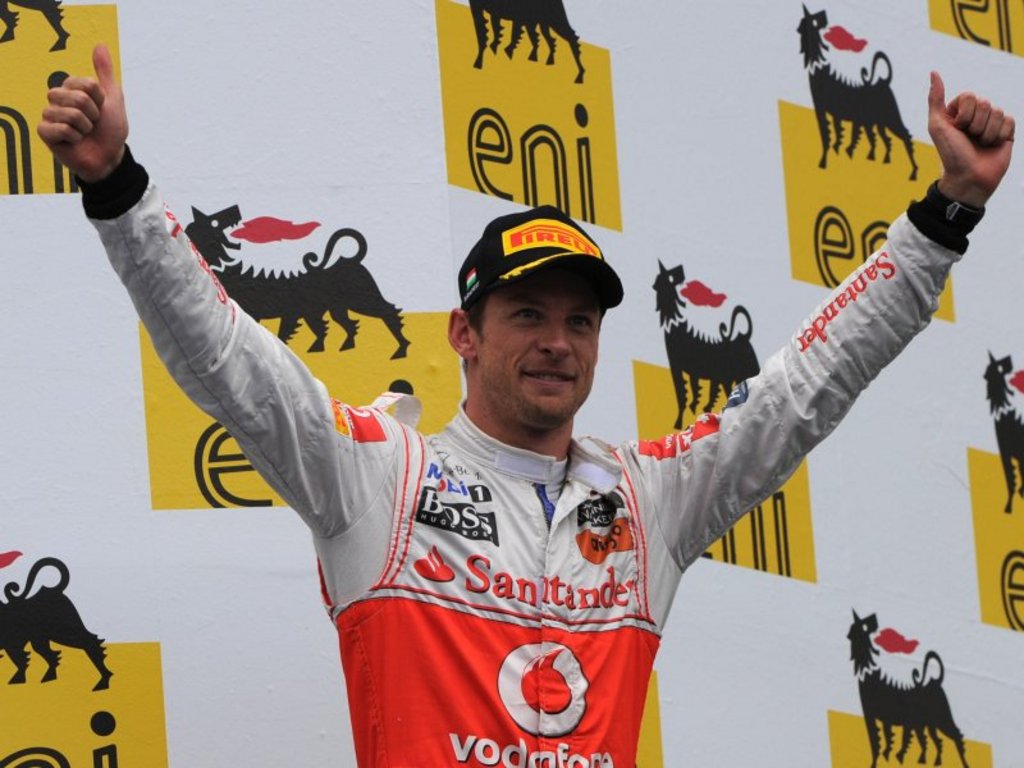 ‘From start to finish this race weekend was all about the Sky. After the anger and emotion arising from the deal to screen Formula One on the satellite broadcaster from next year, the value of what they have bought was there for all to see on Sunday.

‘A race of high drama, in which rain, as so often, played a starring role, ended in fairytale fashion with Jenson Button claiming victory on the occasion of his 200th grand prix – and at the scene of his maiden win in 2006 to boot.

‘Five years on from that memorable victory the McLaren driver proved once again that he is the undisputed king of changeable conditions, driving a measured race and judging his tyres to perfection to beat Red Bull’s Sebastian Vettel to the chequered flag by 10 seconds.

‘Not bad for a man who supposedly spent the previous night in a hospital bed. A hoax story posted by hackers on Button’s official website, claiming the McLaren driver had been seriously injured in a car crash, briefly caused alarm to the driver’s army of admirers overnight.

‘They needn’t have worried. Button was safely tucked up in bed after a party to celebrate his 200th race in the McLaren motor home.

‘It was a measure of the respect and affection in which Button is held by the paddock at large that past team principals such, from Frank Williams to Ross Brawn, turned up to pay tribute to him, as well as rival drivers such as Fernando Alonso, who crossed the McLaren threshold for the first time since he left the team in acrimonious fashion in 2007.

‘Button’s win, needless to day, was almost universally popular. It was also richly deserved and had just a whiff of destiny about it.’ – Tom Cary, The Telegraph

‘When Jenson Button finally gets around to wading through the thousands of congratulatory texts, one message in particular will make him swell with pride.

‘In winning the Hungarian Grand Prix, his 200th race, in such cool, calm and calculated fashion, Button moved past his hero and triple-world champion Alain Prost in the list of grand prix starters.

‘And, with each passing win from Button in changing weather conditions, so the comparisons with The Little Professor become easier to justify.

”I am waiting for a text,’ said a beaming Button. ‘Alain Prost sent me one after Canada, which was really nice. It said “The best one yet”. This isn’t there, but it is close to it.’

‘Button’s win in Hungary came close to the drama of his charge from last to first in Montreal, a race which also saw him plough into team-mate Lewis Hamilton.

‘Gentlemanly conduct was certainly in short supply when Prost shared McLaren’s garage with the late, great Ayrton Senna. But, to their great credit, McLaren have continued the tradition of allowing their drivers to fight it out on the track.

‘The Hungarian Grand Prix has been among the most processional on the calendar. Not so this season.

‘Those who turned up or tuned in to see it were treated to a display of heart and guts by Hamilton and a predatory, stalking performance from Button.

‘But, in the end, the race turned out to be one far more suited to Button’s cerebral approach than Hamilton’s barnstorming.’ – Simon Cass, Daily Mail

‘It was his 200th grand prix and, in one humdinger of a race, Jenson Button made it a fairytale, winning for the 11th time, five years to the race after his first victory.

‘”I’ve got very good memories of 2006,” he had said going into the weekend on the back of two consecutive retirements. “Obviously it’s a long time ago now but it’s the perfect place for me to have my 200th race. The last couple have been a bit difficult in terms of not finishing, so hopefully we can have a good result here on such a special weekend.”

‘He could not have asked for more, and ran from his McLaren afterwards to embrace his girlfriend, Jessica Michibata, and his father, John.

‘The race had turned in his favour on the 47th lap, when he had come across team-mate Lewis Hamilton recovering from a spin, which cost him the lead he had held from the fifth lap. But it owed much, as so many of Button’s wins have recently, to a smooth drive and a canny tyre-choice in demanding conditions.’ – David Tremayne, The Independent

‘Jenson Button had the perfect result in Hungary to honour two milestones: his victory marking the fifth anniversary of his first Formula One win here at the Hungaroring in 2006 and the occasion of his 200th grand prix.

‘The celebrations were deserved. He drove superbly and made the right decisions during an incident-packed race where calling a winner was impossible until the final 15 laps. Not only that but in changeable, wet conditions that have occurred here only once before – on Button’s maiden win. “One of my most enjoyable races,” he said afterwards. “But I would like to win one in the dry please.”

‘His team-mate Lewis Hamilton, who had led for much of the race, ultimately had a less successful afternoon, admitting making “a big mistake” – his chances of a win were scuppered by a wrong tyre call and then a drive-through penalty, although he fought back to take fourth. The world champion, Sebastian Vettel, maintained his championship lead with second and Fernando Alonso took third.’ – Giles Richards, The Guardian

‘Jenson Button roared to victory in a Hungarian humdinger yesterday to celebrate his 200th race.

‘He said: “It’s good we’re having a couple of weeks’ break – it might take that long to get over the celebrations.”

‘The 2009 world champ triumphed on the track and in the same chaotic conditions where he bagged his maiden win five years ago.

‘But McLaren team-mate Lewis Hamilton’s title hopes were dented as he was fourth after a drive-through penalty.

‘…Button claimed his 11th career win by just over 3.5 seconds from Red Bull’s Sebastian Vettel. But Button heads into F1’s summer break still fifth in the standings and 100 points adrift of the German.

‘The Frome flier had a terrific scrap with team-mate Hamilton at the start of the race when they banged wheels. And they swapped top spot FOUR times later on as both were caught out in the tricky conditions.’ – Michael Spearman, The Sun