Home Uncategorized What The Papers Say About Japan 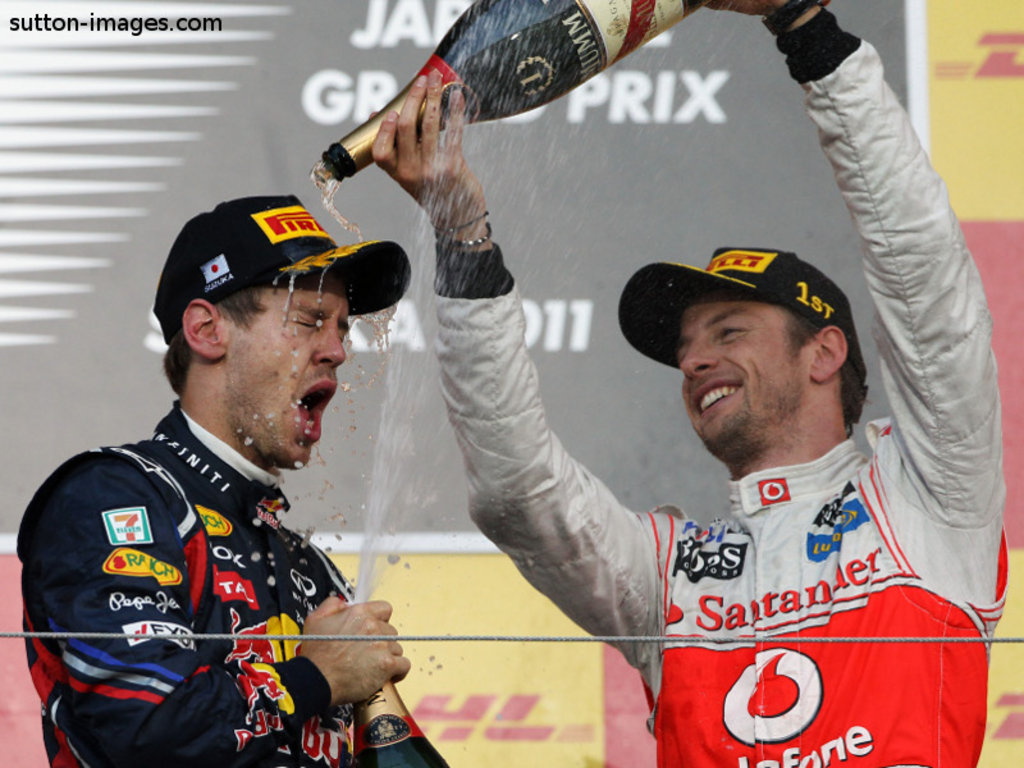 ‘Emotion came flooding out from all quarters after a highly-charged Japanese Grand Prix.

‘Inevitably Sebastian Vettel struggled to maintain his composure after a controlled drive to third place which confirmed the 24-year-old as Formula One’s youngest ever back-to-back world champion, although his radio message to the Red Bull garage was not the high-pitched breakdown which accompanied his first title victory last season.

‘Then there was Lewis Hamilton, sporting a dejected expression in the paddock after yet another disappointing performance which contained his customary coming together with Felipe Massa. At least he managed to rouse himself enough to pop into Red Bull’s hospitality suite in an attempt to congratulate Vettel.

‘The German was off celebrating somewhere else, so the message was delivered to team principal Christian Horner, who was beaming like a Cheshire cat and already sporting a T-shirt proclaiming his driver’s victory.

‘Add to the mix a victorious Jenson Button, whose performances this season ensured Vettel had, at least, to wait until he got here to be proclaimed champion.’ – Simon Cass, Daily Mail

‘Jenson Button has never made any bones about how desperately he wanted to win the Japanese Grand Prix here on one of the greatest race tracks in the world. Yesterday his wish was granted as he dominated the race in a brave but ultimately fruitless attempt to prevent Sebastian Vettel from clinching his second consecutive world championship. The closing laps of a gripping race saw Button under attack from Fernando Alonso, as third place was all that a close-following Vettel needed to clinch his title.

‘The German was ecstatic to clinch the world championship that nobody, least of all Button, ever really thought he might lose, and to become the youngest-ever back-to-back winner. Alonso was asked how he felt not only about losing the race, but also that youngest-ever two-time champion status. Already a trifle unamused by Vettel’s jibe about Monza, the Spaniard gave a dark smile and said he would focus on becoming the youngest-ever three-time title winner. Vettel’s schoolboy grin broke out. “Did you notice that Michael Schumacher is the youngest seven-time champion?” he sniggered.’ – David Tremayne, The Independent

‘For an age, or so it seemed, Sebastian Vettel mooched about, Prince of Wales‑like, waiting for the coronation that must come.

‘It would take place, many thought, after the previous race in Singapore. It seemed as predictable as the intensity of the humidity which held Marina Bay in its clammy grip, making speedy strategists of everyone as they flitted from one air‑conditioned unit to another to avoid the outside, shirt-drenching world. But it was held over for another race.

‘For some, the comfort of Vettel’s triumph – fully expected since May – has detracted from another season of compelling racing. But good drama is not necessarily ruined by a familiarity with its plotlines, as producers of Shakespeare would happily confirm.

‘Vettel’s second success should be applauded, no less for its inevitability. He won this time because he stopped making mistakes. A disciple of Jackie Stewart’s dictum – “if you want to finish in the points you must finish” – Vettel is the only driver to complete all 15 races this season.

‘Last season he was a sometimes callow 23-year-old; this year he has appeared a 24-year-old veteran. Not that there has been much skirmishing.

‘If the one question mark persists about Vettel – can he carve his way through the field? – he can hardly be blamed for that. Like an early-rising commuter, he has set off early to avoid the traffic.

‘He has been a Saturday sensation, taking 12 pole positions, and winning from the front is always the best way to go. Red Bull, meanwhile, like their star employee, have cut out the unforced errors and have been the most polished team in the paddock.

‘Vettel is the youngest double champion, beating Fernando Alonso (2005 and 2006) by a year. He is the 15th driver to have won two championships or more and the ninth to have won back-to-back titles; the dominance has been such that now other records look sharp on the horizon – Juan-Manuel Fangio’s five, Michael Schumacher’s seven.’ Paul Weaver, The Guardian

‘Jenson Button was only half-joking. Asked for his appraisal of Formula One’s youngest double world champion to date, the response came back almost instantly: “—— Germans.”

‘It was a neat quip, but it came laced with apprehension. Button had just won a thrilling and hugely emotional victory in Japan – a country still reeling from the after-effects of March’s tsunami and which Button regards as his second home – but it was the person sitting to his left who was grinning widest: Die Weltmeister, Sebastian Vettel.

‘At the tender age of 24 years and 99 days, that “—— German” can look forward to spending at least another decade at the top. If he carries on like this no one else is going to get a look-in. Even the 91 victories and seven world titles of his hero and compatriot Michael Schumacher, previously thought untouchable, may be in jeopardy.

‘It was Schumacher’s achievement in winning the 2002 gong with six races remaining that Vettel was commenting on when Button interjected with his Basil Fawlty-esque aside. “What exactly do you mean?” grinned Vettel, arching an eyebrow in mock protest. He has always enjoyed British humour.

‘At least Vettel only managed to wrap up this title with four races remaining. Perhaps we should be thankful for that. The worry is, with the ‘Brains of Milton Keynes’, technical director Adrian Newey, also signed up for the long term, the combination of man and machine may prove irresistible for a while yet.

‘Could we be seeing the start of a Schumacher-Ferrari type era of domination? Vettel is certainly ambitious enough, his easy-going demeanour masking a ruthless core.’ – Tom Cary, The Telegraph

‘The Frome Flyer gave the tsunami-shattered nation he considers his second home something to cheer with a commanding victory at Suzuka as the German trailed home third.

‘But the usually mild-mannered McLaren ace was spurred on not just by a nation in mourning, but the German’s ruthless tactics.

‘Even though he got his revenge by roaring to a classic victory and denying Vettel the sheen of a Suzuka hat-trick, Button did not even wait until the podium ceremony to confront his adversary face-to-face. “Didn’t you see me at the start?” he fumed.

‘Vettel roared into the record books as the sport’s youngest double champion at 24 years and 98 days,