Home Uncategorized What The Papers Say About Sepang 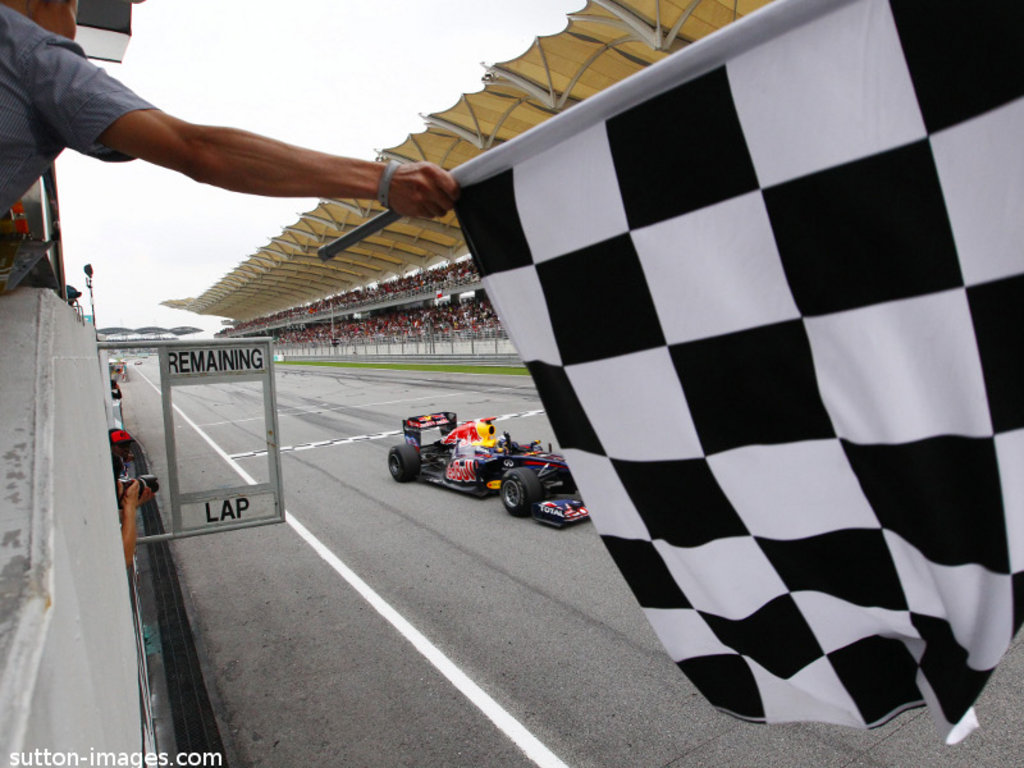 Fleet Street is praising F1’s new regulations after Sepang “lived up to all its hype.” Now if only Hamilton could stop Vettel from winning…

Fleet Street is praising F1’s new regulations after Sepang “lived up to all its hype.” Now if only Hamilton could stop Vettel from winning…

‘Sebastian Vettel made it four wins out of four as the Malaysian grand prix – unlike the season’s opener in Australia – lived up to all its hype.

‘There were crashes, plenty of overtaking, wrecked tyres, bits flying off cars and even a little rain to add to the mix. And for the more technically minded there was plenty of Kers and use of the drag reduction system (DRS) too.

‘But it was a desperately disappointing afternoon for Lewis Hamilton. On Saturday he knew he was just one slightly better-negotiated corner away from taking poll position here. But he was pipped by a tenth of a second by Vettel and yesterday he limped home seventh, and was eventually demoted to eighth after a collision with Fernando Alonso incurred a twenty second penalty. Not only did Hamilton finish behind the German but also his team-mate Jenson Button, who was second, Nick Heidfeld, Mark Webber, Fernando Alonso, Felipe Massa and Kamui Kobayashi.

‘A delighted Vettel, who has now won five out of six races dating back to last season, once again had troubles with Kers. In Australia the Red Bulls had not used the system at all and yesterday, halfway through the race, Vettel was told by his team not to use it any more.

‘But as he crossed the line he screamed: “Fantastic job guys. It’s a pleasure every week to be with you. Thank you – yes!”‘ – Paul Weaver, The Guardian

‘Four consecutive wins. Five out of six. The Sebastian Vettel Show continued in Malaysia where Red Bull’s 23 year-old world champion led once again from pole to chequered flag. The last time Vettel was not leading a race was back in Korea last October. The question, after just two races, is simple: can anyone stop him?

‘Following their impressive speed in qualifying, McLaren had high hopes of doing so. Lewis Hamilton, starting second on the grid, almost got past Vettel on the run down to the first corner, but in the event he not only lost out in that battle but was passed by Renault’s Nick Heidfeld, who had surged from sixth.

‘A highly technical, strategic race ensued in which Hamilton regained second spot, closing at one point to three seconds behind Vettel. But on a day when tyre management became crucial, the Briton got through his rubber up too fast and was forced to make a fourth, unscheduled, stop, which relegated him to seventh. The Briton was dealt a further blow after the race when a 20 second penalty for weaving saw him slip to eighth.

‘Instead it was Hamilton’s team mate, Jenson Button, a man famously easy on his tyres, who came through to finish second, just ahead of Heidfeld.

‘In doing so, Button moved up to second in the championship standings, on 26 points, behind the runaway leader Vettel who already has almost double his tally with 50.’ – Tom Cary, The Telegraph

‘Lewis Hamilton needs to forget about his long-running rivalry with Fernando Alonso and start worrying about Sebastian Vettel.

‘Britain’s former world champion may prefer Alonso to be his arch-enemy – recently calling the Ferrari driver his nemesis – but he will be wasting his energy if regaining the title he won in 2008 is his aim.

‘Alonso was a distraction in Malaysia, ploughing into Hamilton’s rear right tyre and picking up a 20-second penalty for the collision.

‘But it was a harmful distraction for the McLaren driver, who finished eighth after also being penalised – for making more than one change of direction when trying to fend off the Spaniard.

‘All the while, the car Hamilton should have been most concerned about was the Red Bull of Vettel, who has now won the first two races. This victory in the Malaysian Grand Prix opened up a 24-point lead over Jenson Button.’ – Simon Cass, The Daily Mail

‘Sebastian Vettel maintained his perfect start to the new Formula One season with another crushing victory in Malaysia.

‘The reigning world champion has so far been impeccable over the past two weeks, with none of his rivals able to hold a candle to the German and his Red Bull team.

‘The margin on this occasion around Sepang may only have been just over three seconds to McLaren’s Jenson Button, but it was by no means any less emphatic.

‘Taking the end of last season into consideration, Vettel has now won four races in a row, and five of the last six grands prix overall.

‘Today’s triumph was also the 12th of his career, and second in succession at this Far East circuit.

‘Behind Button, who has now moved up to second in the standings, albeit already 24 points down on Vettel, Renault’s Nick Heidfeld grabbed third ahead of the second Red Bull of Mark Webber.

‘Even without the torrential rain that had been forecast in the run-up to this race, it was still a chaotic grand prix.’ – Ian Parkes, The Independent