Home Uncategorized What The Papers Say About Spa 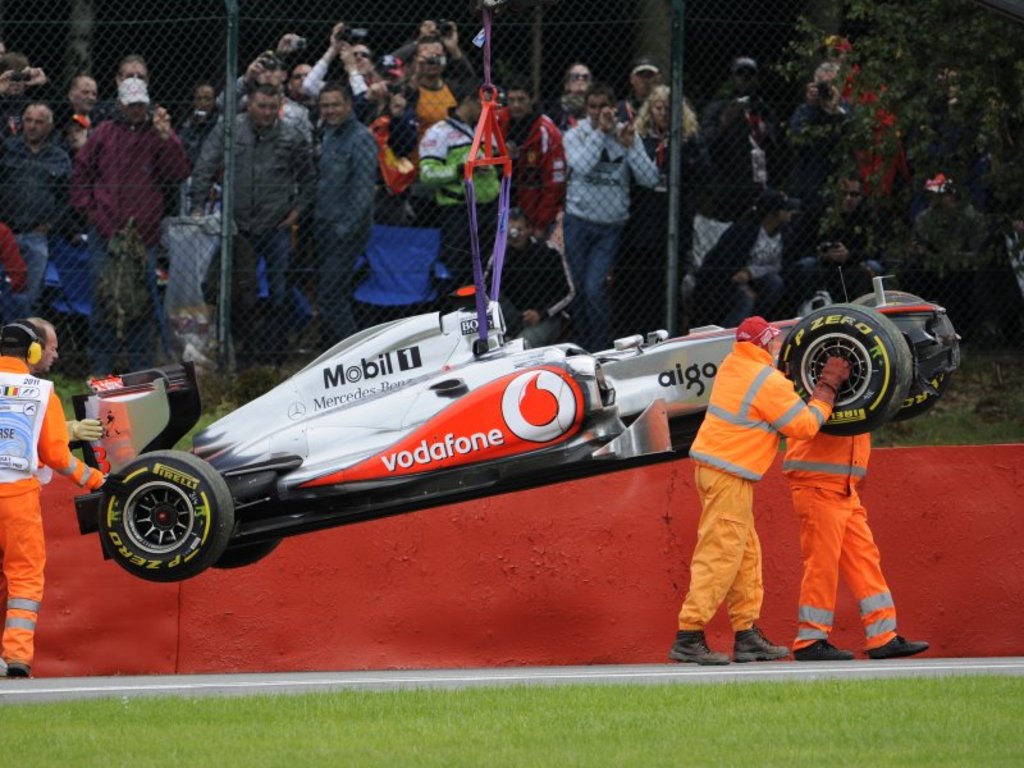 ‘Lewis Hamilton had long since beaten a retreat from the Ardennes by the time Sebastian Vettel crossed the finish in Spa to seal his seventh win of the season and effectively wrap up a second successive drivers’ championship.

‘Battered from a high-speed crash following a collision with Sauber’s Kamui Kobayashi on lap 13 – for which he later accepted the blame – and with his pride severely dented, Hamilton managed to mumble a few words to reporters before climbing into his waiting car.

‘They were barely audible above the din of the action still going on around him but their meaning was clear enough: it is over.

‘What a difference a couple of days can make. Going into the weekend Hamilton and his McLaren team-mate Jenson Button had talked confidently of piling the pressure on Vettel.

‘He had not won for three races, they said. He was starting to get jittery. Vettel’s pole and race win, achieved in commanding fashion, has ended such fanciful talk for this year.

‘Vettel’s pole, race win and fastest lap – the holy trinity in grand prix terms – has ended such fanciful talk for this year.

‘Theoretically the German could wrap it up as early as Singapore next month, with five races of the season still to run, but it is more likely to happen in Japan or Korea.’ – Tom Cary, The Telegraph

‘Just when it seemed the tide had turned against Red Bull, devoid of victory since Valencia last month, Sebastian Vettel and Mark Webber scored an emphatic one-two in a Belgian Grand Prix here yesterday that started off sensationally until their sheer pace rendered it another demonstration run.’ – David Tremayne, The Independent

‘The famous old grand prix circuit here was covered in thrown-in towels as Sebastian Vettel won his seventh race of the season to widen his lead to 92 points over his Red Bull sidekick, Mark Webber.

‘Even the wildest flights of fancy that have been recently heard from Britain’s Lewis Hamilton and Jenson Button, as well as Spain’s Fernando Alonso, are now buried deep in the dark forests and rolling hills of the Ardennes.

‘We thought it was all over – it is now. Even Hamilton, who crashed out on lap 13 of Sunday’s Belgian Grand Prix, admitted as much. “Everyone should forget about the title because it is not going to happen,” he said. “I’ll get as high up as I can in the championship, but that’s it.” He left the track before the race was completed.

‘Hamilton is 113 points behind Vettel with seven races to go and the one meaningful challenge that is left open to him is to finish the top driver at McLaren; he is three points behind Button, who trails the third-placed Alonso by eight.

‘McLaren and Ferrari appeared to have closed the gap on Red Bull in the previous three races, at least in performance, but now it is terminal.

‘Button and Michael Schumacher provided the drives of the day. Button started 13th on the grid and dropped back to 19th after sustaining front and rear wing damage in two separate incidents but went on to grab third place behind Webber, showing glimpses of his form in Montreal.’ – Paul Weaver, The Guardian

‘At least there was no appointment with the stewards to delay Lewis Hamilton’s departure after another wretched day.

‘The McLaren driver hung around to catch some of an impressive recovery drive from Jenson Button. But long before his team-mate was standing on the podium, Hamilton was being ferried away from the Ardennes.

‘Any hopes he had of preventing Sebastian Vettel taking his seventh win of the season exploded like the polystyrene advertising hoarding his McLaren obliterated before making heavy contact with the barrier in yet another prang.

‘On lap 13, Hamilton moved to take the racing line in Les Combes chicane only to brush wheels with Kamui Kobayashi’s Sauber and be sent spinning. Mercifully, Hamilton was unhurt.

‘The stewards, who included Nigel Mansell, had reprimanded Hamilton in qualifying for his squabble with Pastor Maldonado. This time they viewed the crash as a racing incident and took no action.’ – Simon Cass, Daily Mail