Home Uncategorized What The Papers Say About Turkey 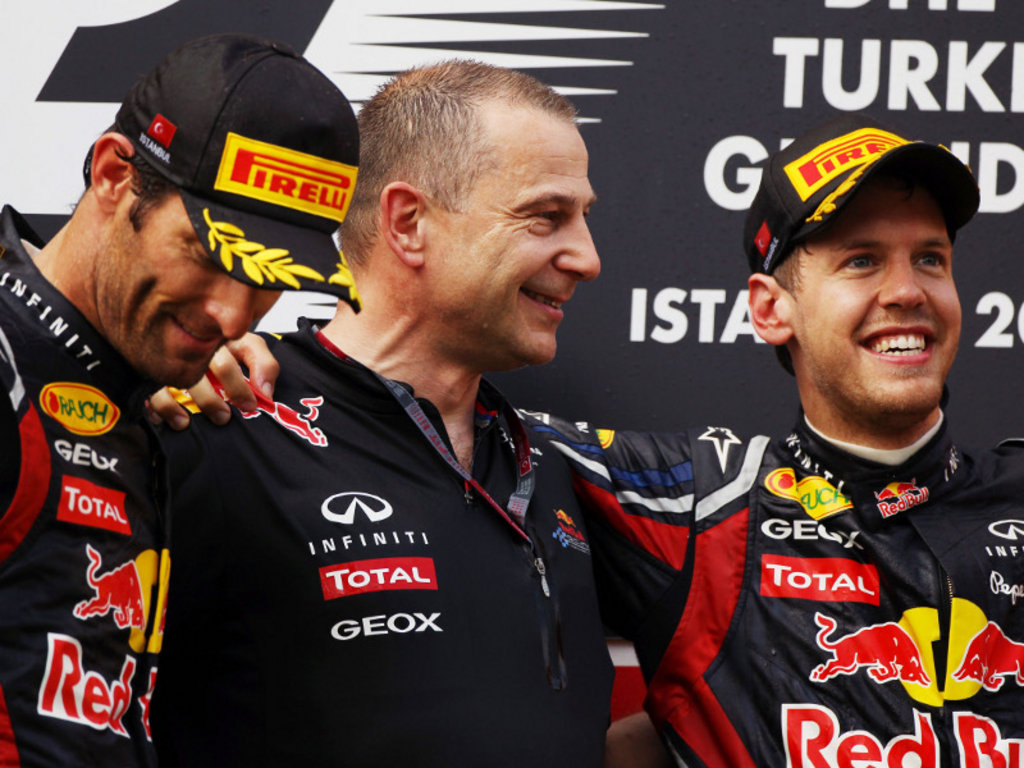 Fleet Street may believe that Red Bull’s 1-2 in Turkey was ‘predictable’, however, that didn’t take away from their excitement during Sunday’s race…

Fleet Street may believe that Red Bull’s 1-2 in Turkey was ‘predictable’, however, that didn’t take away from their excitement during Sunday’s race…

‘The contrast could not have been greater. Twelve months ago Red Bull ended this equivalent race weekend reeling from a Turkish inquisition; a collision between their two drivers prompting allegations from Mark Webber that the team favoured their young German wunderkind, Sebastian Vettel.

‘The resulting media frenzy caused the outfit to clam up, the poisonous atmosphere threatened to bury their world title hopes. It did not, of course. Red Bull eventually won both championships in a thrilling climax to the season. The worry for their rivals, just four races into this one, is that the experience gained from that rancorous campaign makes this year’s a foregone conclusion.

‘McLaren won in China last month, outthinking Red Bull on strategy. But such occasions are rare and, in truth, they have been chasing Red Bull’s tail for the best part of two years. On Sunday, Lewis Hamilton and Jenson Button finished where they started – fourth and sixth – their frustration compounded by the fact Fernando Alonso’s Ferrari appears to have leapfrogged them in race pace. The Spaniard pushed Webber hard for second but was passed by the Australian six laps from the end.

‘If Sebastian Vettel can continue in this rich vein of form, it will not be long before his second world title in a row is being toasted.

‘Vettel was denied a swig from the magnum on the top step of the podium after his third victory in four this season because of Turkey’s strict drinking laws. At 23 years old, Vettel is a year shy of being able to consume alcohol at an open-air public event.

‘In fairness, the bubbly should probably go to the mechanics who spent 14 hours repairing the damage to his car after a spin in the wet during Friday practice.

‘But Vettel did his bit after the car was fixed, grabbing his fourth consecutive pole so comfortably that he was out of the car well before the end of the session.

‘His blast around Istanbul Park was just as dominant, with those striving to wrest the crown from his grasp performing eye-catching overtaking moves to no avail as they trailed in his wake.’ – Simon Cass, Daily Mail

‘A smile glowed on Christian Horner’s increasingly assured-looking features when the Red Bull team principal was asked whether Sebastian Vettel had any weakness. “Well, he turned up this weekend with a quite dodgy haircut,” he said. And that’s all he could come up with as he relaxed in his motorhome after the Turkish Grand Prix on Sunday.

‘Vettel’s victory was his third in four races this year and his sixth in eight if you look at the way he dominated the end of last season. But he is still so young that he was not allowed to drink any of the podium champagne that was sprayed after the 12th victory of his still embryonic career (the drinking age here has been raised to 24 and Vettel is only 23).

‘It is not only the extra pace of the Red Bulls that dismays their pursuers at McLaren, Ferrari and Mercedes. It is the fact that the world champion has lifted himself to a different level, so it looks as though he has adopted the podium position before the start of each race.’ – Paul Weaver, The Guardian

‘What a difference a year makes. Twelve months ago, Sebastian Vettel got back to the pits on foot, making “he’s crazy” signs after he and his Red Bull team-mate Mark Webber had collided while fighting for the lead. This time he took his latest car, that he has nicknamed “Kinky Kylie”, into the victory lane with the Australian 8.8 seconds behind as they defeated a stronger than usual challenge from Ferrari’s Fernando Alonso.

‘It was, once again, a race of multiple pit stops – as the notoriously tough Turn Eight left-hander exacted a heavy toll on Pirelli’s deliberately fast-wearing tyres – and of multiple overtaking, mainly because of the straight-line advantage conferred on a following driver by the DRS movable rear wing. But Vettel would barely have noticed any of that since he was in a class of his own for the whole afternoon.’ – David Tremayne, The Independent

‘Sebastian Vettel got back to his winning ways with a dominant victory in Turkey.

‘A year after his horrifying gaff when he crashed out with his own teammate while leading, he was faultless today.

‘The German notched up his third win in four races and sixth in eight, outside Istanbul to stretch his enormous lead in the world championship even further.

‘Mark Webber lost second place to Nico Rosberg off the start but battled back to wrestle it from Fernando Alonso eight laps from the flag.

‘After conjuring an amazing victory with a clever tyre strategy at the last race in China there was to be no such miracle from Lewis Hamilton in what threatens to be the last race here in Turkey.

‘This time he could manage no better than fourth as Fernando Alonso who roared from fifth on the grid to finish third.

‘Remarkably it was Ferrari’s first podium in what has been one of the worst starts to a season in their history.’ – Byron Young, The Mirror