Home Uncategorized What We Learned From Qualy 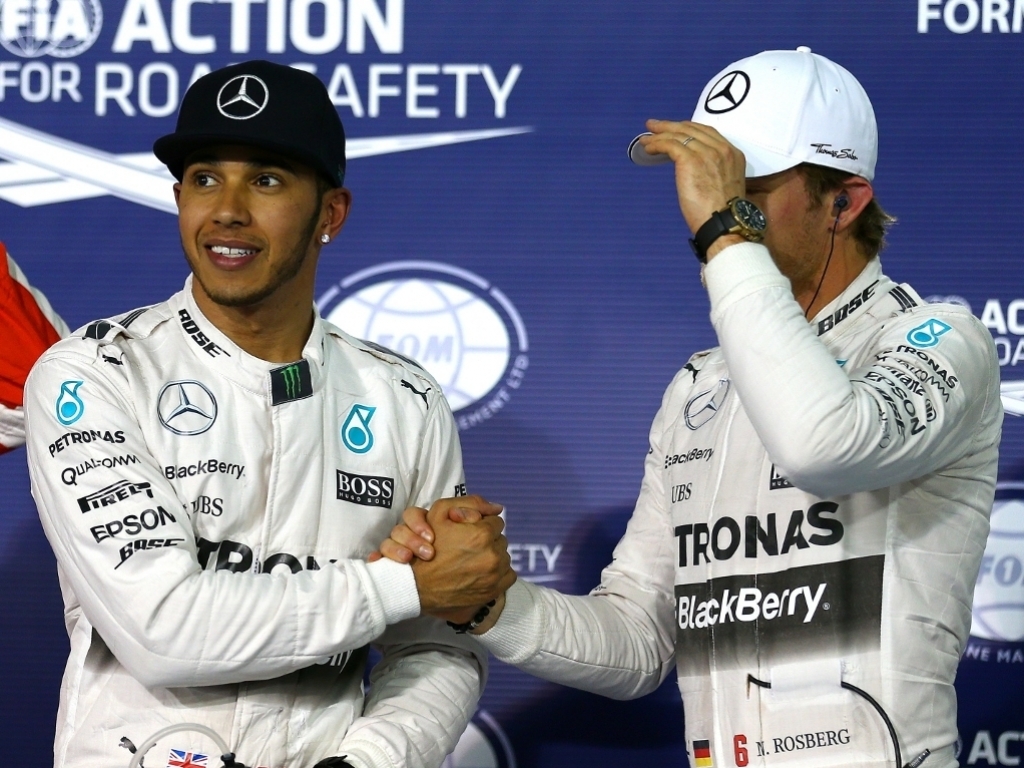 Lewis Hamilton makes it four from four, worried faces on the Ferrari pitwall, Williams the best of the rest and more.

* Lewis Hamilton made it four poles out of four in Bahrain, claiming his first ever P1 at Sakhir, the first Brit to do so in Bahrain. Lewis’s final lap was 0.4 clear of his nearest challenger, Sebastian Vettel, who will line up in P2 (just as he did in Malaysia).

* In 2014 Nico Rosberg claimed pole position with a 1:33.185, this year Hamilton’s PI time was a 1:32.571, not as big a jump in lap time from year to year as some were expecting. However the significant factor is that Nico Rosberg was banished to the second row, over half a second behind his team-mate.

* The grid will be Mercedes, Ferrari, Mercedes, Ferrari – with Kimi Raikkonen lining up in P4. Afterwards Rosberg put his lack of a front-row start down to a tardy Q2 time that was a whole 1.2 seconds slower than Hamilton’s. "I was thinking too much about the race," said Nico, "and I underestimated Sebastian's speed. I took it easy in Q2 to save the race tyres, so I lacked the rhythm for Q3. That's where I went wrong today. Being third is not ideal."

* Sebastian Vettel may have got an important P2, but there were worries on the Ferrari pitwall in Q2 when the four-time World Champion radioed back that he had put a data marker down when he felt a loss of power – "I hit the marker button" reported Seb.

* The Williams team are fast establishing P5 and P6 as their own, but this time it was Valtteri Bottas who got the better of Felipe Massa. Technical boss Pat Symmonds wasn’t fooled by Ferrari’s lack of pace in Q1 and Q2 which gave the impression that it might have been the Williams cars which were going to be Mercedes’ closest challengers. "Ferrari were tyre saving right from Q1" said Pat.

* In Q3 most drivers put in a sighter  lap with a set of used Soft tyres, but Red Bull’s Daniel Ricciardo went the other way and set a P1 time on his first lap with a new set of Soft tyres. Hamilton edged past him, but had there been a sudden Red Flag then it would have been: Hamilton, Ricciardo, Rosberg, and Bottas on the front two rows. However Daniel ended up the quickest Renault-engined runner in P7.
Daniel’s mechanics supplied the comedy moment of the session leaving a spanner in the cockpit of his car, which the Aussie duly handed back with a grin before putting his helmet on.

* Force India posted their best qualifying result of the year with Nico Hulkenberg in P8 and Sergio Perez in P11. Both looked to be heading for Q3 until Carlos Sainz Junior’s last minute lap spoiled the fun.

* There is a lot of Bahrain investment in the McLaren team, so it was a miserable time for boss Ron Dennis who had to watch Jenson Button (in his 100th race for McLaren) leave the pits and grind to a halt – yet again – after just a few corners. However it looked like team-mate Fernando had a realistic chance of getting into Q3 after he posted the P9 time in Q1 – a 1:35.205. Sadly in Q2 everyone picked up their pace while Fernando could only go two-tenths quicker, and he ended up in P14.

* It was also a miserable time for Daniil Kvyat (Red  Bull) and Max Verstappen (Toro Rosso) who had to watch their team-mates get into Q3. Kvyat failed to get out of Q1 for the very first time in his driving career.

* An engine problem for Pastor Maldonado relegated him to P16, whereas Romain Grosjean was able to show the true potential of the Lotus E23 in P10.