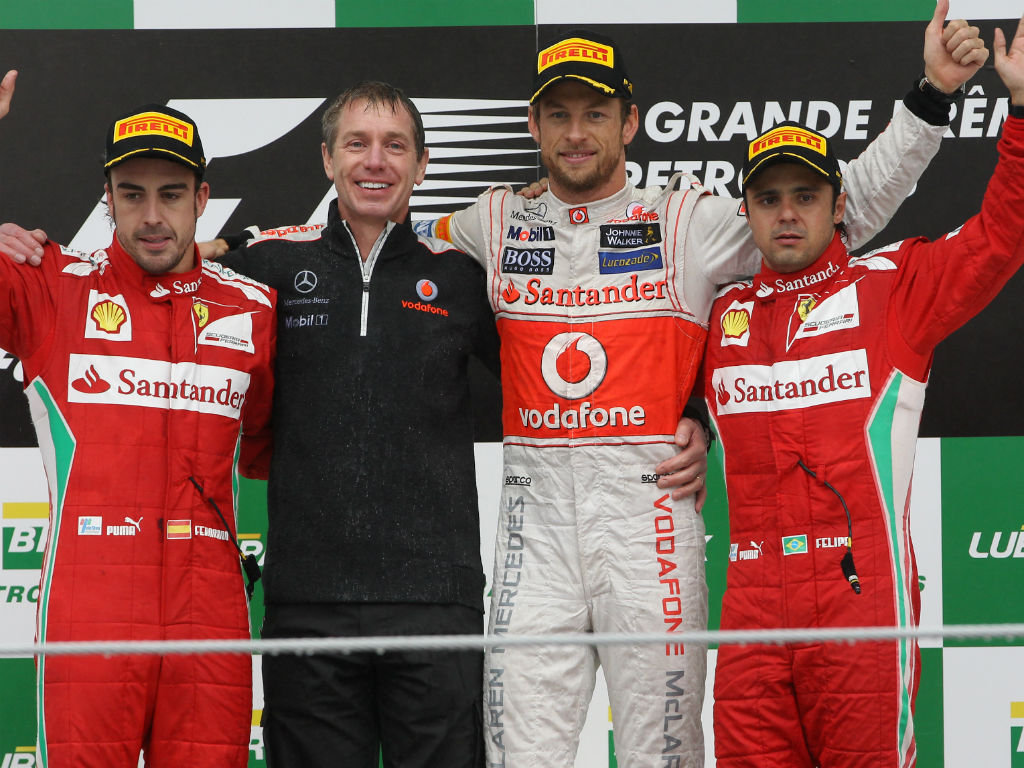 Star of the Race
Jenson Button, McLaren, 1st
Button showed just who is the better McLaren driver in mixed conditions on Sunday after he stalked Lewis Hamilton over the opening laps and then made the decisive move on Lap 8. He and Hulkenberg were 45 seconds clear of Hamilton and 64 seconds in front of Alonso when the Safety Car came out on Lap 23. Although the Force India driver managed to dispose of his team-mate, it’s likely that as the rain came down again Button would have re-established his superiority.
Despite winning the last race, McLaren are the big losers of 2013. They had the fastest car – Hamilton scored the most poles of any driver (not even counting Barcelona) – yet they didn’t get a driver in the top three and were third in the constructors’ championship. They may have scored the highest number of wins since their formation in the 1960s, (after the USGP win) but the major success is still eluding them.

Overtaking Move of the Race
Lap 36: Felipe Massa on Kamui Kobayashi
You could probably fill a grid with the number of drivers who have tried to make an overtaking move around the outside of Lake Descent and found themselves actually descending towards the lake and not continuing round the track. The fact that Felipe Massa managed it around the outside of Kobayashi – who needed a result – shows how bullish and on top of his game he was at Interlagos. Korea, USA and Brazil have shown him at his very best and also reinforced Stefano Domenicali’s judgement in signing him for 2013. Had he been leaving the team after this race and this performance, then the Ferrari team might not have got out of the country. There will probably be some post-race recriminations aimed at Domenicali from the hard-to-please Luca Montezemolo, but as Stefano said before the race: “what more you can do?”

Sat on the Naughty Step
Bruno Senna, Williams, DNF
Bruno Senna was more contrite about his first lap accident in the BBC forum than he was during the race. Coming down the straight to Lake Descent he was behind Raikkonen, and Di Resta with Vettel two places in front. He made a move on Raikkonen, tried to get DiResta and thumped into Vettel. It wasn’t an overtaking move it was a total misjudgement. As Bruno confessed afterwards: “When I saw it was Sebastian I thought – uhoh, that’s a bad one.”
On a day when it was difficult controlling the horsepower, four of the five members of the Carbon Fibre Club were out within the first four laps: Senna, Perez, Grosjean and Maldonado. Only Kobayashi managed to keep his car on the island, although he did manage to put in two commendable bumps in the race, including a farewell Kamui Kiss for Michael Schumacher.

Winners
Fernando Alonso, Ferrari, 2nd
Alonso did virtually everything he could to conjure a result in the race but came up short. The position he ended up in was flattering. During the race he was never faster than the front-runners, and it was only in the final few laps when Button started to take it easy that he began to reduce the gap between himself and anybody seriously in front of him who wasn’t his team-mate. Even then Felipe Massa was driving solely as Alonso’s domestique and if he could have gone back to the team car and fetched some water half way through the race, he would have.
Alonso got away with running wide off track early on and if he’d come in for inters on Lap56, when Felipe inadvertently got in front of him again, then he might have been closer to Jenson, but he was never going to get close. As it was, Fernando – or Tenacious-F as he’s known in the PF1 office – didn’t see his greatest opportunity for the win. Button’s car snapped away from him in the same standing water that threw Paul Di Resta at the barriers, but the Brit held it. That would have been one hell of an ending.

Nico Hulkenberg, Force India, 5th
Hulkenberg had a fantastic race but threw away a podium place by bouncing into Hamilton. Up until Lap 23 he was virtually guaranteed a magnum of champagne having braved it out with Button when all around were diving for inters and it had become a two-horse race. When told he had a drive-through penalty he claimed he didn’t know what it was for. Yeah, right. He’s got quite a few months to watch replays before we’re back in Melbourne next year to see exactly where he went wrong.

Sebastian Vettel, Red Bull, 6th
An epic drive, in an epic race. This is why we love F1 so much. Before the lights went out Seb was the overwhelming favourite to be World Champ. By Turn 4 he was in last place with a pretty damaged car that had sustained a double impact and Alonso was heading for P3. Even when Seb is being hit by another car he is still thinking and instead of applying the brakes allowed his car to roll down the hill to put himself further away from the turn so that cars following could see him and go either side. “When you are heading down the M25 the wrong way, it’s not a comfortable feeling,” he admitted.

Michael Schumacher, Mercedes, 7th
Another farewell in Brazil, another puncture, but Michael managed to break the unenviable run of pointless Mercedes races. And he beat his team-mate, too.

Kimi Raikkonen, Lotus, 10th
“Leave me alone. I know where I’m going!” We’re trying to imagine what Kimi said to his race engineer when he tried to get back onto the circuit. Raikkonen went off track on Lap 52 and headed for what he thought was an escape road, before having to turn round and go back the way he’d come.
“Where I went off you can get back on the track by going through the support race pitlane, but you have to go through a gate. I know this as I did the same thing in 2001 and the gate was open that year. Somebody closed it this time.”
Anway he was just deliberately time-wasting. What Kimi was secretly hoping was that Lewis would win the race and come third in the drivers’ title so that he wouldn’t have to attend the FIA awards dinner in Paris and receive a trophy he didn’t want. Nico Hulkenberg put an end to all that.

Vitaly Petrov, Caterham, 11th
It would be interesting to know what the atmosphere was like in the Marussia garage when Charles Pic (off to Caterham in 2013) got back in, having been overtaken by Vitaly Petrov for the place that gave Caterham 10th in the constructors’ championship and several million dollars. Despite Vitaly taking the vitally important position, he may still find himself without a seat in 2013.

Podium Ceremony Interviews
It’ll be an improvement for 2013 if all of the podium interviews can be done in Portuguese. As that nice boy Ben Edwards commented on Felipe’s speech: “I can’t understand it, but it was lovely.”