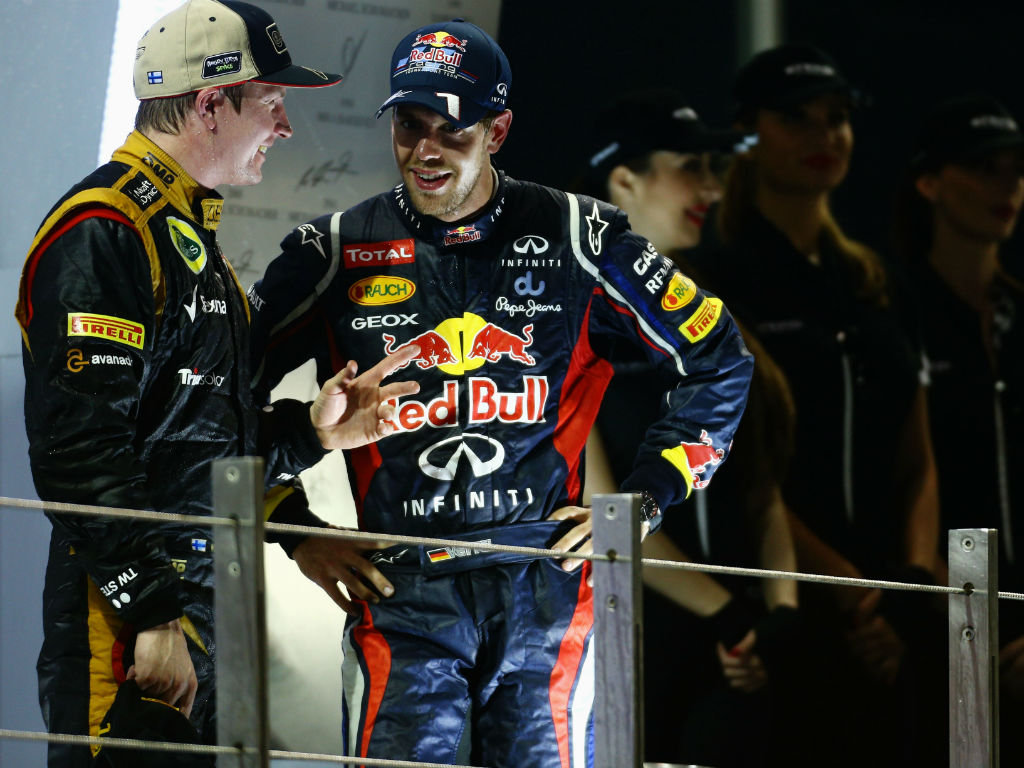 Raikkonen was disappointed at winning so late in the season, while Vettel got away with murder both in the cockpit and on the podium…

Raikkonen was disappointed at winning so late in the season, while Vettel got away with murder both in the cockpit and on the podium…

Star of the Race
Kimi Raikkonen, Lotus, 1st
He may have been gifted the win but he had an error-free day in which he resisted both the challenges of Fernando Alonso and the advice from his engineer Simon Rennie. Most satisfying of all from the man who has spent a season being disappointed about every success was that at his moment of ultimate triumph he was still downbeat. The quote: “I was really hoping to have won before so there is no reason to be jumping around,” was exactly what we had been hoping for in the Planet-F1 office. High-fiving all round.
And Raikkonen has every reason not to get carried away with his win, he only won because a Mercedes fuel pump gave up on Lap 20. Before that Lewis Hamilton was going away from him with consummate ease.

Overtaking Move of the Race
Lap 1: Fernando Alonso, Ferrari on Mark Webber, Red Bull.
They may be good friends but it looked like that friendship was about to be strained on the opening lap of the race when Fernando Alonso made one of the most critical passes of the race. Alonso more than anyone else knows the virtues of not getting stuck behind people and as he showed on the opening lap in India, he has a very good judgement of what he can do on full tanks. Cars struggled to get by on the back straight in Abu Dhabi with the DRS enabled but Alonso made it with only the assistance of KERS and good old-fashioned braking.

Sat on The Naughty Step
Sebastian Vettel, Red Bull, 3rd
If you’re a World Champion, you have to behave like a World Champion and marginally a grown-up. It’s not big and it’s not clever to swear in front of the World’s media on the podium or spray champagne on the grid girls – you just look like a bit of a tosser. Sebastian Vettel can be charming and articulate and often spends more time than most (or he needs to) with the media, but put him on a podium and he reverts to twelve years old. David Coulthard was trying to do a job of work up there. I wonder how funny he’d find it if DC came along and poured water down his neck as he sat in his cockpit on the grid.

The Big What If…
What would have happened if Vettel had started from his original P3 on the grid?
For the want of 0.15 litres of Total essence, Seb could have started the race from P3. And it’s not too hard to conjecture the pathway of events should that have happened. Hamilton was away clear as the red lights went out. With Mark Webber having such a catastrophically bad start it would have been Seb into P2 off the line. Raikkonen would have been behind Vettel so even though he hooked up perfectly he would only have taken P3 with Maldonado P4 and Webber P5.
Alonso didn’t get such a great start and took advantage of Button trying a move on Webber that didn’t come off and lost Jenson a place. Had Button been one place further back from Webber then he probably wouldn’t have bothered and just aimed to consolidate his place.
Thus at the end of the first lap it would have been: 1.Hamilton, 2.Vettel, 3.Raikkonen, 4.Maldonado, 5.Webber 6.Alonso, 7.Button. (Alonso, as we saw with Webber, has immense first lap speed and would have made up at least one place).
Given that Maldonado lost KERS after his pit-stop then we can assume that both Mark and Fernando would have got past the Venezuelan, making it: 1.Vettel, 2.Raikkonen, 3.Webber, 4.Alonso – once Hamilton had retired. Alonso proved that he can get past Webber without the DRS as he did on the opening lap and so the sheer top speed down the straights that made Fernando uncatchable would have given him the pass on Webber at some stage. So the result would have been a fairly boring 1.Vettel, 2.Raikkonen, 3.Alonso, 4.Webber, 5.Button.

Winners
Fernando Alonso, Ferrari, 2nd
Alonso was pretty near perfect, he didn’t make the most brilliant of starts, but his opening lap move on Webber was breathtaking. His only flaw – which was almost certainly down to the machinery – was that his re-starts after the Safety Car were slow. He dropped 1.7 seconds to Maldonado on the first restart and he dropped 1.9 seconds to Raikkonen on the second. And he went on dropping seconds from 1.9 to 2.5 to 3.1 seconds before he started turning the tide on Lap 47 with a string of heart-stirring fastest laps that brought him back to 1.7 seconds on lap 51. Had he not dropped back so dramatically, he would have been in a position to pass before the end of the race.

Sebastian Vettel, Red Bull, 3rd
Vettel was very lucky to claim P3 in Abu Dhabi. Not so much down to the Safety Cars, more to his escape from a far more serious accident with Bruno Senna on the opening lap. Vettel wafted his RB8 up the inside of Senna just as Senna tried to get past an HRT. If you get a significant chunk of your car inside another they’re suppose to leave you room, but when you know that driver will be watching the other car, you’re leaving a lot to chance. The Red Bull front wing escaped more or less intact, but it could have been far worse. By the end of the race, he had become exceptionally polished at taking cars into Turn 11, and his overtaking move on Button was one of the best.

Jenson Button, McLaren, 4th
Button was unlucky at the start, trying a move on Webber, then getting passed by Alonso because it didn’t come off and almost losing a place to Felipe Massa in the aftermath. He shouldn’t have been so far back, qualifying an unhealthy distance behind his team-mate. He put in a good move against Maldonado but quickly ran out of ideas with Alonso.