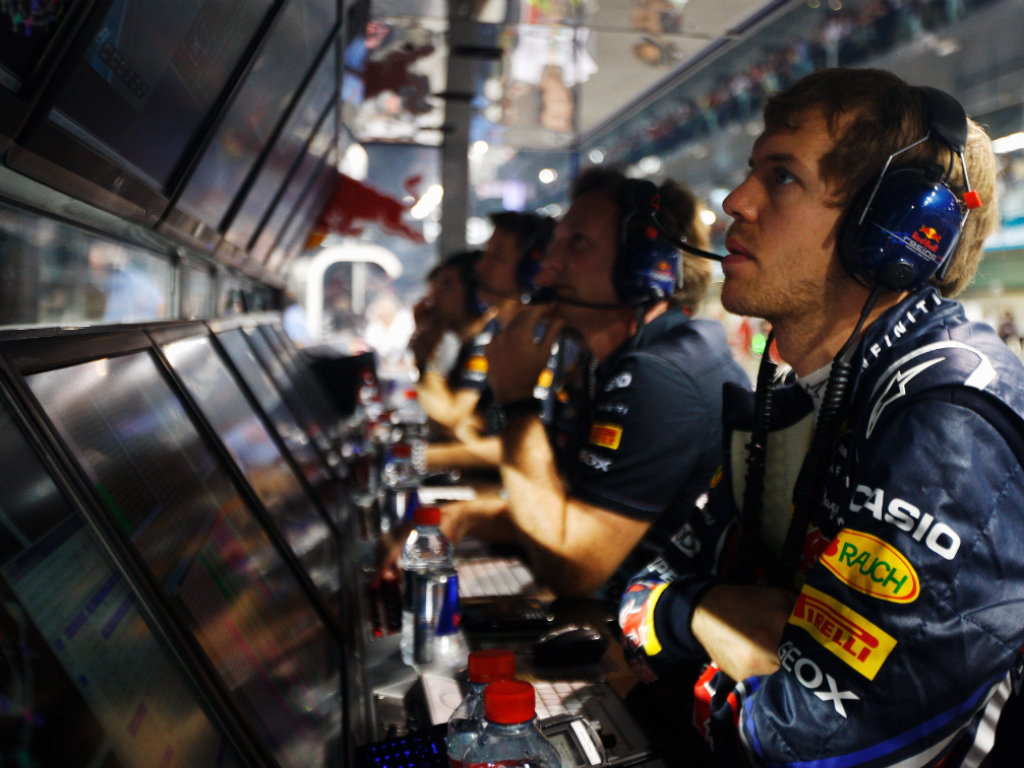 Fernando and Lewis were the big winners in Abu Dhabi – Seb, Pastor and ‘Venezuela’ the big losers…

Fernando and Lewis were the big winners in Abu Dhabi – Seb, Pastor and ‘Venezuela’ the big losers.

Star of the Race
Fernando Alonso, Ferrari, 2nd
Another dogged drive by Alonso. Earlier in the week Fernando had delivered a fantastic compliment to Lewis saying that he was the only driver on the grid who could win a race with a car that wasn’t the fastest. Today’s GP only reinforced what we knew already – that there are at least two drivers who could produce drives like that. Whereas Hamilton can win things by taking risks and driving close to the edge of adhesion, Alonso’s relentless precision coupled with a degree of patience that Lewis lacks can see him climb the top step. The Ferrari in qualifying looked the fifth and sixth fastest cars, yet in the race Alonso was remarkable. In the early stages when Button had a fully working KERS he pulled away from him and hung onto Hamilton. On the opening lap Lewis had a 2.5 second lead. By Lap 10 it was still only 2.7 seconds and they hadn’t hit the backmarker traffic.

Overtaking Move of the Race
Lap 10, Kamui Kobayashi on both HRTs
Kobayashi stopped early to get rid of his Prime tyres and so was stuck behind the squabbling HRTs of Ricciardo and Luizi. Liuzzi had just scrambled past Ricciardo in what looked a fairly fierce team-mate battle through the two DRS zones. As Liuzzi gained the racing line going towards Turn 14 Kobayashi jumped inside both of them to take the place. Taking two cars at once is always going to be one hell of a move, but with so much at stake for the Sauber team, and at a corner where nobody else was recorded making a pass it was pretty spectacular. It would have been good to see it from onboard. All you can do is hope that the official F1 highlights package on F1.com saw it. (The same with first lap onboard footage from Nico Rosberg’s car). As Brazilian footballer Ronaldo was moved to say before the race – “I very like it.” Kamui’s single point was a great result both for him and the team, edging clear of Toro Rosso in what will become THE battle of the Brazilian GP.

Winners
Lewis Hamilton, McLaren, 1st
He didn’t put a foot wrong, but then again he won the race with a race-winning car. In reality he should have been on pole given that he produced Saturday’s fastest lap time. Today there was nobody to get past in a hurry, nobody to defend against, only a few backmarkers to get in the way, but no-one worth exchanging panels with. A first division performance on a third division circuit.

Jenson Button, McLaren, 3rd
We’ll never know quite how good Jenson Button’s race performance was as it seems he was involved in a re-progamming exercise for most of it. Although we know KERS came on and off during the race, there was maybe something else besides that he wasn’t going to go into. Certainly in some of the post-race interviews he limited himself to the KERS on/off, resetting every two laps, engine braking/no engine braking dilemma, with just a hint that there was something else.

Mark Webber, Red Bull, 4th
Webbo drove a whole load of storming laps to make sure of 4th place but it was a surprise to see him try a three-stopper. He had some good duelling action with Jenson Button on track and the two are great friends but on one overtaking move he came perilously close to taking off Jenson’s front wing.

Felipe Massa, Ferrari, 5th
The fact that Felipe’s come fifth or lower all year is an indication of the season he’s having and a further reinforcement of the statistic that the last 48 podiums have been shared between just five drivers – the five drivers usually ahead of him on the grid. His Lap 49 spin on the Prime tyres didn’t cost him anything, but with Nico Rosberg only 1.7 seconds shy at the end of the race, he cut things a bit fine.

Nico Rosberg, Mercedes, 6th
Michael Schumacher, Mercedes, 7th
A much better qualifying position for Michael (for a change), even if there was a significant time difference between P7 and P8. He got a great start against Rosberg but Nico got him back later in the lap. Afterwards Schumi was quick to point out that the Options he started on had done more mileage than Nico’s (due to some fannying around in Q1) and he wasn’t going to hold him up. Aaah, the Corinthian Spirit lives on…

Adrian Sutil, Force India, 8th
Paul Di Resta, Force India, 9th
Adrian Sutil’s doing his best to make it as hard a decision for Vijay Mallya as possible. Barring a tropical storm they’ve got 6th place in the Constructors’ sewn up now. Paul Di Resta set out on another baffling strategy exercise but still managed to make it through to 9th place.

LosersSebastian Vettel, Red Bull, DNF
Even when he didn’t win he was fantastic. He didn’t scurry off to the motorhome or kick the metaphorical Red Bull cat. He stayed on to go and have a look at the kerb where he punctured, he hung around and gave long interviews in the pitlane afterwards. He was thoughtful, considered and shook everybody’s hand. How does he manage it without a ‘happy bubble’?

Pastor Maldonado, Williams
Never have so many drivers been fed up with the sight of ‘Venezuela’ in one single race.