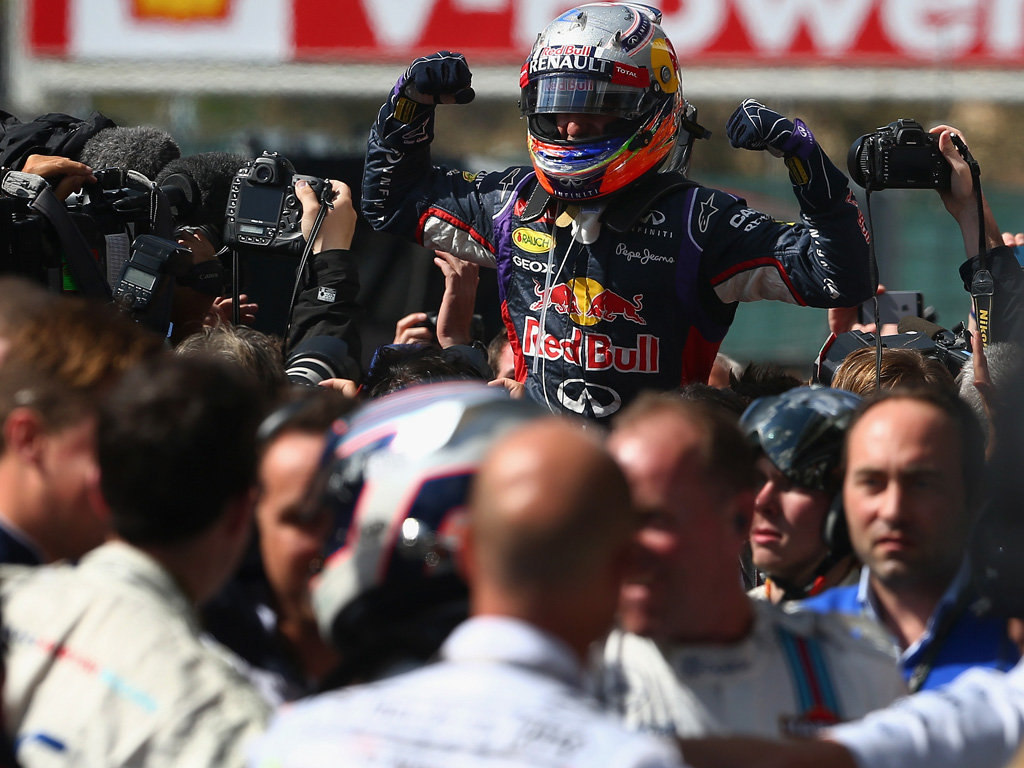 Daniel Ricciardo made it two on the trot thanks to Nico Rosberg’s one-man campaign at wrecking Mercedes’ challenge.

Star of the Race
Daniel Ricciardo, Red Bull, 1st
With virtually no elements to the Red Bull rear wing, the middle sector of Spa was incredibly tricky to drive. Dan was driving a Monza wing (at the next race, there will be nothing left to take off) around Spa. Maybe the trickiest bit of all was qualifying in the wet on Saturday. As we saw from the onboard footage from Q3, Dan made the most monumental of saves going through Blanchimont to keep all of his car in Belgium.
In the race he got a reasonable start and was soon closing up on Alonso, and once past on Lap 4, capitalised on a mistake when Vettel got a tank-slapper in the middle sector. From then on it was a careful exercise in tyre preservation as Rosberg came at him on the charge in the closing stages.
This wasn’t the street-fighting demonstration of Canada and Hungary, this was another facet of the complete Ricciardo set of virtues, driving to a perfect plan to achieve a result that his team thought was barely possible.
Overtaking Move of the race
Lap 31: Valtteri Bottas on Sebastian Vettel for P4
The Mercedes engined Williams of Valtteri Bottas may have had a power advantage over the Red Bull, but in the canny aero configuration that Adrian Newey had adopted for his cars at Spa, they didn’t necessarily have a speed advantage. Although Bottas had DRS going up to Les Combes, to go side by side with Vettel into the braking zone and then tough it out round the outside through the corner (without touching) was a demonstration of precision driving from Bottas (helped by Vettel).

Winners
Kimi Raikkonen, Ferrari, 4th
Despite his best result of the season Kimi was reassuringly downbeat after finishing fourth. The Ferrari looked dishearteningly slow through Eau Rouge and it probably won’t be a whole lot easier in a fortnight’s time.
Sebastian Vettel, Red Bull, 5th
An exemplary Qualifying performance from the World Champion, but he wasn’t able to look after his tyres in the race. It didn’t help that he tried an overtaking move on Lewis Hamilton on Lap 1 that immediately demoted him to P3 when he locked his brakes and ran straight on at Les Combes. He finished the race a massive 51 seconds behind his team-mate. Some of that will be accounted for by the Magnussen/Alonso/Button/Vettel circus at the end of the race, and some by the strategy, but it’s quite a defecit at a track where Seb can get pole.
Jenson Button, McLaren, 6th
It’s been rare for the McLarens to hustle the Ferraris this season, but Button was able to do that at the end by making late stops and keeping life in his tyres. He even briefly led the race.
After Magnussen put Alonso on the grass on Lap 43 he and Fernando Alonso shared a few corners that will easily make the Best of the Season highlights. Jenson nicked the place past the recovering Alonso going into Les Combes, Alonso forced his way back, then Jenson kept his foot in as he and Alonso ran side by side behind Magnussen as they headed for Rivages. Jenson edged Alonso out, before his team-mate pushed him over the kerbing at the exit of Rivages allowing Alonso back past Button. Epic stuff.
Button was still able to finish 7th, elevated to 6th by his team-mate’s post-race penalty. However the McLaren debriefing will be an interesting transcript. I doubt “a fun little battle” is what Jenson will be saying there.
Fernando Alonso, Ferrari, 7th
Fernando was unlucky to be still up on the jacks on the grid at the 15-second signal, but managed to get away just in time to reclaim his grid slot. He made light of the Magnussen incidents after the race and will probably be more put-out that Raikkonen beat him so convincingly.

Losers
Nico Rosberg, Mercedes, 2nd
Mathematically Nico was not a loser in his Championship battle, but a bit of inexpert braking put the kybosh on a Mercedes 1-2 and put his bolted-on win in jeopardy. He then compounded the Lap 2 error by another piece of overtaking ineptness, flatspotting his tyres in a late-braking move as he failed to get past Sebastian Vettel on the outside into the final chicane on Lap 16. The flatspot created an almighty vibration that meant Rosberg had to pit on Lap 19, forcing him into a 3-stop race which ultimately cost him the win.
So it was two racecraft errors that lost him points, after some sensationally good Qualifying that showed a consistency in wet conditions that Hamilton just couldn’t match.
At Les Combes on Lap 2, it wasn’t the degree of the error, because it was only a small error, it was the fact that Rosberg was trying way too hard way too early.*
*Subsequent to writing this, after the Mercedes debrief it seems now that Rosberg deliberately left his car there ‘to prove a point’. Exactly what point he was trying to prove will take all of the fortnight up till Monza.
Lewis Hamilton, Mercedes, DNF
Lewis got the dream start from P2 and was well clear by the time he got to La Source, making up for another error-strewn Qualifying on Saturday. As we have now seen countless times, he got tapped from behind, and had a floor-destroying drive back to the pits.
Having to complete a race distance with a car lacking 50 to 60 points of downforce was clearly not an interesting challenge, and though his engineer regularly lied to him about how good he was doing in comparison to the other cars, Lewis could see for himself that he could hardly catch Sutil. So even if the field had closed up under a Safety Car, he was still only driving at Sauber speed.
Kevin Magnussen, McLaren, 12th
Kevin Magnussen has had a thing about Ferrari drivers this season, usually qualifying in or around Kimi Raikkonen and having fun, and sometimes contact, with the Finn. Today he received the ire of Fernando Alonso, who could have had the most monumental of accidents had he lost control on the grass at 200 mph as the two cars sped towards Les Combes on Lap 43.
Earlier he had moved to block the Force India of Nico Hulkenberg into Les Combes at the very last second, another move which looked marginal.
Alonso’s favourite move of the day had been to take a wide line through Rivages, and overtake on the outside heading towards Turn 9, as he did on Perez on Lap 13. Magnussen didn’t allow him to do that and washed him out to the edge of the track as he was entitled to do. Alonso wasn’t pleased, but that was just racing. And to show that Kevin was treating everyone equally, he did the same thing to team-mate Jenson Button.
The only problem is that Magnussen blocked Button so comprehensively that his team-mate was then passed by Alonso and Vettel in rapid succession. Had he played the team game then Button would have finished the race in front of Vettel to take P5. Magnussen was already heading for a meeting with the stewards and a 20-second penalty. Drivers had had points on their licence for less.
Felipe Massa, Williams, 13th
Massa finished the opening lap in front of Jenson Button, so should have been in the hunt for some Ferrari-threatening points. Tyre debris in his front wing and floor seemed to slow him down an awful lot.
Media Watch
The BBC team were keen to take on the Ice Bucket Challenge at Spa, but it came one day earlier than scheduled. In Qualifying all hell broke loose when the sky went dark and the heavens opened
Eddie Jordan: “I’m not sure what’s going on here, is it hailstones, or maybe it’s the end of the world.”
Suzi Perry: “And I’m going to spend it with you…?”
David Coulthard, talking about events at the Hungarian GP on Saturday: “At this moment in time, with my trousers soaking wet, I don’t care what language Mercedes delivered the team orders in…”
Three Times Le Mans Winner Allan McNish was a bit discomforted by the fact Caterham had recruited Three Times Le Mans Winner Andre Lotterer in the grand prix. ‘How long till the phrase “Three Times Le Mans Winner” becomes on object of derision?’, you could imagine him thinking.
There were shades of the violent French revolution of 1789 when Allan McNish was discussing the problems encountered by French driver Romain Grosjean at Lotus. “I have to say. He’s kept his head very well in difficult circumstances,” said Allan.
“We are in the Ardennes forest. Anything can happen. We’ve known this for all this time.” Eddie Jordan
Andrew Davies (Three Times Le Mans Visitor)