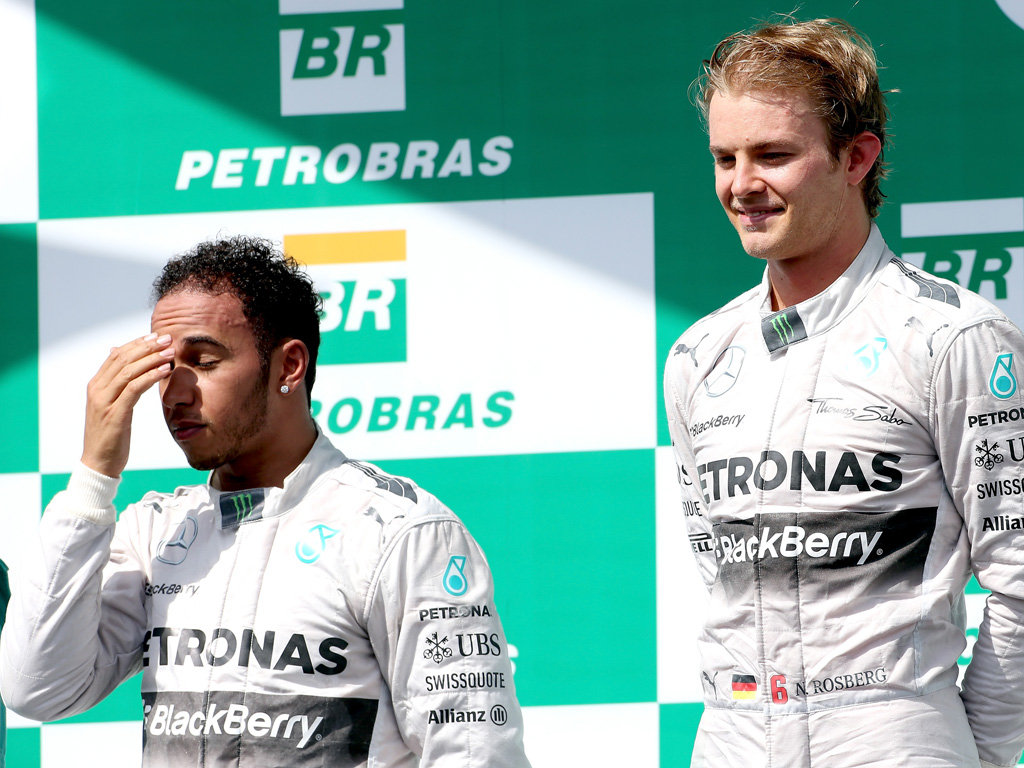 Star of the Race
Nico Rosberg, Mercedes, 1st
From the moment he got an immaculate getaway from the line, Rosberg made few mistakes on his way to a fifth win of the season. The win crowned an almost perfect weekend; fastest in all free practice sessions, pole position and the win. The only thing he failed to pick up was the fastest lap which Lewis put in on Lap 62 (but not by much).
The most important thing that Nico had to prove today was that he could resist pressure and even though he wasn’t the fastest driver on the day, he wasn’t forced into a braking error as he has been in races past, despite having a team-mate at less than a second back for the final 19 laps of the race. It wasn’t a faultless performance because there were at least two pretty trashed sets of tyres in there, and Interlagos isn’t a heavy braking circuit (his weakness) but he made sure he didn’t cock up Turn 4 and that’s what counted the most

Overtaking Move of the Race
Lap 61: Jenson Button on Kimi Raikkonen – for P4
Raikkonen was in a pretty resolute mood today, as witnessed by his defence of P6 from Fernando Alonso, but Jenson Button has his eye on another P4. When the McLaren failed to get past into Turn 1, the cars edging through the very first part of the Senna Esses in close proximity it looked inevitable that JB would try the second DRS into Turn 4. Raikkonen saw him coming, claimed the inside line, but whereas he could keep his team-mate at bay with a crafty line through the corner, Jenson went round the outside of Kimi but kept enough momentum.
Winners
Lewis Hamilton, Mercedes, 2nd
This was certainly one that got away. Lewis has had his fair share of dramas into Turn 4, Lake Descent, over the years, but the spin on Lap 28 gave him too big a gap to close.
Hamilton demonstrated in the laps from Lap 29 to Lap 47 – when he reduced the gap to Rosberg from 7.4 seconds to 1.9 seconds – he was the quicker of the two drivers. But just as one key mistake ruined his pole lap, one key mistake on his in-lap ruined his race.
Felipe Massa, Williams, 3rd
Felipe Massa survived a pitlane speeding penalty and a trip into the McLaren pitbox to stand on a podium he probably thought he was never going to stand on again. Which is the happy ending we all wanted. Williams 0.2 deficit to Mercedes in Qualifying disappeared very quickly in race conditions. The chance of a Williams win was almost as likely as rain.
Jenson Button, McLaren, 4th
McLaren were not expecting to improve on JB’s impressive P5 from Qualifying, especially when the track temperature approaching the start of the race was 53C. But with it clouding over and dropping to 44C Jenson was able to keep his tyres together and keep ahead of the Red Bull team

Sebastian Vettel, Red Bull, 5th
Christian Horner (hammer of the smaller teams) speaks a large amount of rubbish, whining about engine power and one of his contentions – that Renault lost a second from the bottom of the hill at Juncao to the Interlagos finish line – was not borne out by Sebastian Vettel’s speed in the race. Vettel’s first lap wobble that allowed Magnussen and Alonso past, looked unlike the wobble of four-times World Champion – in fact it seems that both he and Lewis have bad feelings about Descida do Lago, a corner that keeps on tripping both of them up.
Fernando Alonso, Ferrari, 6th
Fernando put some old school manners on (potential 2015 team-mate) Karismatic Kevin but struggled to get past Kimi until he could get his exit from Juncao right.
Kimi Raikkonen, Ferrari, 7th
Kimi’s best race in ages, and it was only a pitlane error by a hasty jack man that dropped him the time he needed to stay in front of Alonso. Raikkonen’s defence of P6 from Alonso was masterful car-placing stuff, but the oddest thing of all was to see two Ferraris actually duelling it out wheel to wheel. A collector’s item, that – bring on Abu Dhabi.
Nico Hulkenberg, Force India, 8th
Nico raced sensibly to a lap time, but still went on the attack when he had the opportunity. There were shades of his accident with Lewis Hamilton as he entered a braking competition for Turn 1 with Valtteri Bottas and forced the Williams driver off track.
Losers
Valtteri Bottas, Williams, 10th
On an afternoon when team-mate Felipe Massa scored a podium despite a 5-second pitlane penalty, Bottas should have been 4th or 5th ensuring Williams take P3 in the Constructors’ Championship. The fact that he was back in 10th was thanks to a disastrous pit-stop which should have taken 22 seconds from pitlane entry to pitlane exit, but lasted 35.
Daniel Ricciardo, Red Bull, DNF
The self-styled ‘honey badger’ made an unexpectedly early return to the pits. ‘Unexpected’ because in reliability terms Daniel had finished all but seven of the total laps raced in 2014 and was the most consistent finisher. But his Brazilian GP was cut short after a front- brake problem meant that another 31 laps would have to be added to that amount.
Nelson Piquet
Bang goes the Sky Sports contract… As Rubens Barrichello is now a broadcaster you have to wonder why he wasn’t up there doing the podium interviewers instead of a man who is as funny as haemorrhoids but thinks he’s Brazil’s answer to Frankie Boyle.
Media Watch
“We’re looking at Nico Rosberg who’s just put his helmet and his hands on.” Three Times Le Mans Winner Allan McNish
James Allen almost said this twice, but it was a sentence that really needed the word ‘forget’: “I was here on the final day of the season in 2008 – a day I’ll never remember.”
Regular readers of this column will know our love for James Allen’s occasional ‘Yoda-like’ sentences, which we, for some, time aren’t having. However Nico Rosberg obliged after Qualifying. Nico Rosberg “I’m not ecstatic. As important is tomorrow.”
STBO Award
“Lewis Hamilton’s got a flatsport on his front tyres and Nico Rosberg’s got problems with his rear tyres at exactly the other end of the car.” Allan McNish
Andrew Davies