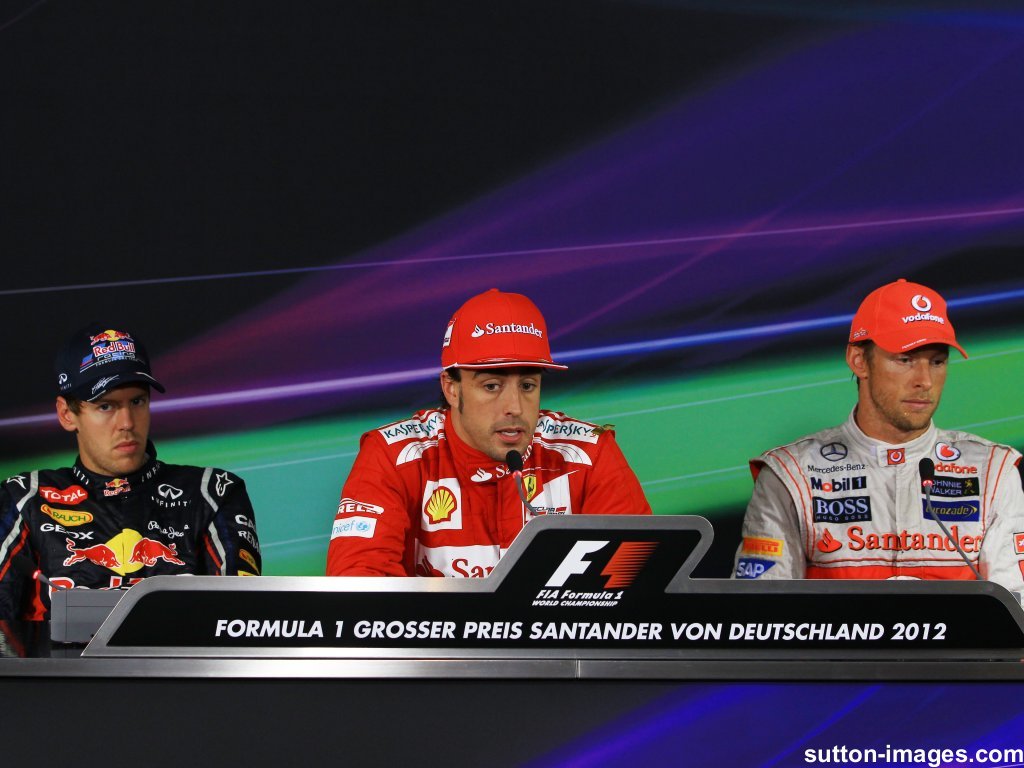 The race in which we had five World Champs in the top five on Lap 45. One enjoyed waving at the fans, the other at the drivers…

The race in which we had five World Champs in the top five on Lap 45. One enjoyed waving at the fans, the other at the drivers…

Star of the Race
Fernando Alonso, Ferrari, 1st
This is what he does best. Win when he shouldn’t. He shouldn’t have won in Valencia, but he did. He shouldn’t have won at Hockenheim, but he did. At the European Grand Prix he produced some dazzling overtakes and took some well-calculated risks to snatch the win. At Hockenheim it was a combination of managing a car that was slower than the McLaren and the Red Bull for most of the lap and maximising his speed when he was most vulnerable – out of Turn 3 and running through the DRS to Turn 6. To which he added his usual masterful ability of keeping cars at bay, failing to make a mistake and choosing absolutely the right strategy.
The only slight gripe is the constant switch between Italian and English on race radio between himself and his engineer Andrea Stella. The whole point of making race radio available to broadcasters is that people can get an insight into what is going on. It’s fair enough that they should speak Italian, it’s an Italian team, but stick to Italian.

Overtaking Move of the Race
Lap 5: Kimi Raikkonen on Paul DiResta
It seemed like both Force Indias spent their whole race being overtaken. Paul had actually got ahead of Kimi Raikkonen in the opening laps and Kimi wanted to get by him in a hurry. They raced through Turns 7, 8 and 9 virtually side by side but Raikkonen made it stick. Edge of your seat stuff.
As for the rest of the race, Kimi moved up into fourth but was never going to challenge the front three and wasn’t actually faster than them when he was told he was by his engineer. He should apply to the Red Bull management for his magnum of champagne that Vettel nicked off the podium.

Winners
Jenson Button, McLaren, 2nd
Jenson proved that indeed it’s not him it’s the car by stepping back onto the podium and finishing seven seconds behind the winner. Most impressive of all was Button’s final pit-stop when he got in and out of his pitbox in what Mclaren claim is 2.31 seconds and jumped Vettel in the process.

Kamui Kobayashi, Sauber, 4th
A great race from Kamui (who has supposedly been told to get a move on by the team) so overtaking Perez while Sergio was engaged in overtaking another car will only add to the pleasure.

Sergio Perez, Sauber 6th
A double Sauber celebration, finishing 6th from 17th on the grid was another line to be added to the ever-expanding driver cv of ‘Checko’. And he kept his front wing the entire race. Unlike some.

Michael Schumacher, Mercedes, 7th
A familiar 7th place for Michael. With German drivers starting in P2, P3 and P4, they could only manage P5, P7 and P9. That’s the kind of German efficiency that closed Munich airport a couple of weeks ago because the radar failed, stranding thousands. How un-German is that?

Mark Webber, Red Bull, 8th
One of the mysteries of the race was how Mark could make no significant progress from 8th on the grid having qualified as high as third (yet taken a gearbox penalty). It was clear that Vettel had KERS issues in the race after the team asked him to reset it, but it looked like Mark had lost his altogether.

Nico Hulkenberg, Force India, 9th
Great qualifying, not such a great result, but Nico Hulkenberg put on a show with some wily defence against Sergio Perez, delaying the inevitable. If the Force India ambition was to get the car on TV this weekend he certainly achieved that.

Losers
Charlie Whiting, FIA Race Director
A poor race from Charlie Whiting who should have sent out the Safety Car after Massa spread carbon fibre all over the high-speed Turn 1 on Lap 1. And the reason he should have done it is because he did it for a much lower speed corner at the European GP which dramatically affected the race result. The consequences of a high-speed tyre deflation into Turn 1 at Hockenheim would have been far more serious – yet there was debris floating round there for many laps afterwards. Even on Lap 4 Alonso’s Ferrari was knocking chunks of it into the air as he came through.
In Germany the cars were already bunched up from the start so it would have been very quickly cleared and nobody would have been adversely disadvantaged. So Sebastian Vettel has every reason to feel retrospectively aggrieved.

Pastor Maldonado, Williams, 15th
After finishing the opening lap in P6 he simply disappeared. With so much track action going on, unless you were passing a Force India or had a Red Bull or McLaren glued to your gearbox, you didn’t have a hope of getting screen time.

For the rest of the Hockenheim losers, click here.