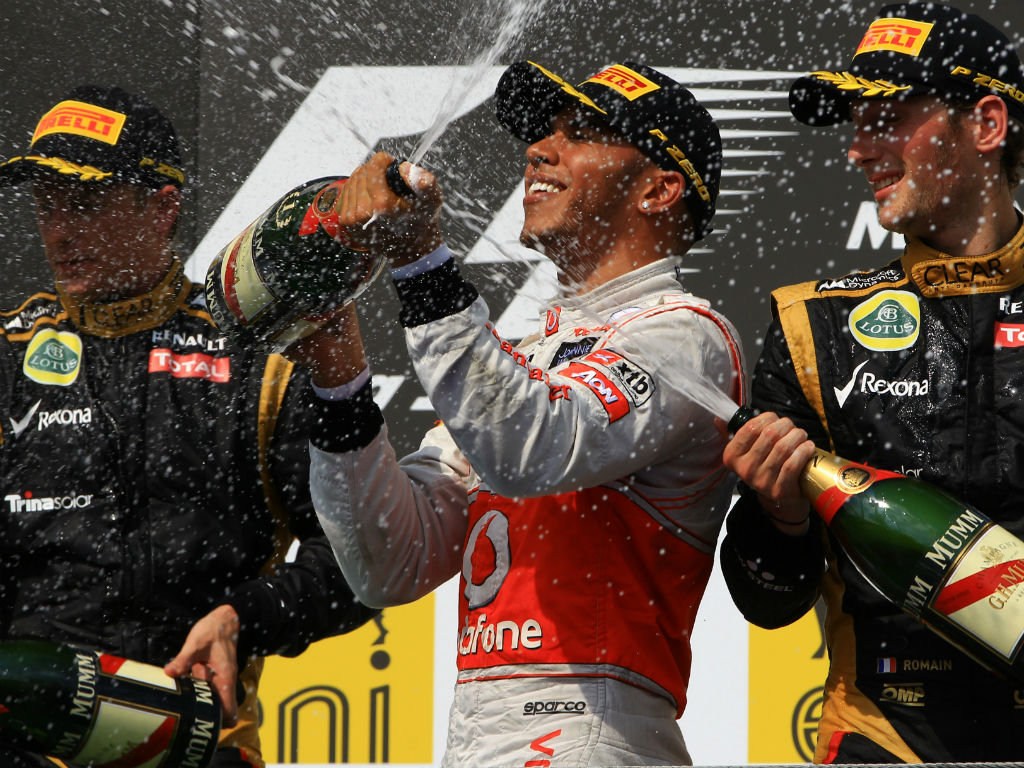 Lewis Hamilton resisted the challenges of a grumpy Finn, a happy Frenchman and the newly crowned Princess Stampy Foot…

Lewis Hamilton resisted the challenges of a grumpy Finn, a happy Frenchman and the newly crowned Princess Stampy Foot…

Star of the Race
Lewis Hamilton, McLaren, 1st
Like Alonso last week, Lewis won with two faster cars behind him. He dominated the weekend; quickest in FP1, FP2, Q1, Q2, Q3 and the race. His start was perfect, his Turn 1 braking a bit late, but from then on it was a perfect run to the flag. Earlier in the season Lewis had a little swipe at the people who were always saying that Jenson Button was kinder to his tyres (i.e. Brundle), but this was proof again that Lewis has learned the art.

Overtaking Move of the Race
Lap 21, Bruno Senna (7th), Williams on Sergio Perez, Sauber
Jenson Button’s opening lap pass on Vettel was good, but Bruno Senna showed that there is a Williams driver who can pull off a risky overtaking move on a Sauber without it ending in tears. You’ve got to be brave to try an outside move around Sergio Perez at Turn 2, especially when he’s got fading tyres, but Senna made it stick. This was a race where he needed to show speed and get points and he did both, outcompeting Maldonado if not outqualifying him.

Overtaking Move of the Race That Didin’t Quite Come Off
Lap 59, Fernando Alonso on Sebastian Vettel for P4
Yet another passing move attempted at Turn 2, but one which didn’t result in a pass. Sebastian Vettel was newly emerged from the pits on soft tyres and Fernando Alonso had a go at him round the outside. Like Senna’s move, it was a risk, but the fact that he was prepared to have a go told you volumes about Alonso’s positive attitude. He wasn’t banking the points and cruising to the flag.
Given that what action there is in Budapest happens at Turn 2 Turn 2 you might think they’d put a big grandstand there.

Winners
Kimi Raikkonen, Lotus, 2nd
Kimi is making ‘being miserable after a race’ into an art form. Whereas with most drivers what they say after a race is rarely that interesting, with Raikkonen you hang on his every word hoping that one time a scintilla of enthusiasm might slip through. Like Romain Grosjean being grumpy after a race or Pastor Maldonado admitting responsibility for one of his accidents, it’s probably never going to happen. Not until he wins from pole while lapping the whole field… and finding out they substituted the winning trophy for a tanker of premium lager.
He may have been grumpy after the race but it’s his fault, yet again he got overtaken on the opening lap and got stuck behind Alonso. Had he completed the opening lap in the position he qualified he’d probably have won. So it’s a nonsense to blame the Lotus team’s inability to qualify well. And I’m keen to know what his cheery engineer meant with the message: “Press okay twice, the battery’s a bit empty, Kimi,” in response to Raikkonen saying he had no KERS. Did he forget to charge it? Did he lose a place and lose the race because he forgot something. I’d like to think so

Romain Grosjean, Lotus, 3rd
A brilliant qualifying performance and a great defence of P2 from the dirty side of the grid on the opening lap proved that Romain is nobody’s fool. A great recovery from what was a pretty miserable weekend in Germany.

Princess Stampy Foot, Red Bull, 4th
What a fantastic insight that was. You find out more about drivers when they’re having a hissy fit than when they’re thanking the team and the guys back at the factory. After showing his arrogance last week in Germany by describing Lewis Hamilton as stupid (while wearing the stupid hat), Vettel came out with an astonishing outburst while stuck behind Jenson Button. “I can go much faster than him so do something!” Vettel yelled at his patient engineer Rocky. Followed by, “Try something then, try something!” to which he got the reply: “There are cars behind, Sebastian, we can’t just do anything”.
To be fair he’s not the only one – Lewis can get a bit terse and clipped, Jenson gets all moany about understeer and Fernando is very funny when he works himself into a rage, like one time at Benetton when he wanted them to move team-mate Fisichella out of his way. And they wouldn’t. But nothing as directly rude as this. Come to think of it, I can’t ever remember Mark Webber losing his cool.
Anyway, in the last stint, he showed just how phenomenally fast he was in a blaze of fastest laps. Had Michael Schumacher not lost his engine at the start, reducing the racing laps from 70 to 69 he might yet have taken a podium.

Losers
Pirelli and DRS
Oft praised as the saviour of boring old circuits (and boring new circuits) by providing us with overtaking opportunities that didn’t exist before, Pirellis + DRS couldn’t work their magic on the Hungaroring. They may have invigorated the Sakhir circuit in Bahrain but not Budapest. Last year was wet and spectacular so we arrived in 2012 with a false sense of optimism. But no, it was back to the normal drudge of following and following and following; even if you were two seconds a lap faster than the car in front. So yes, Hungary is still Monaco without the history and the glamour and the excitement of proximity and the prospect of a Safety Cars.
But there are more Finns.

Hungarian Race Marshals
Did anybody else spot the marshal leaning against the barrier near Turns 10/11 who seemed to spend the whole race looking at his mobile phone? Billions of dollars of the finest racing machinery known to humanity were racing past behind him, but he was like a teenage girl hooked on BlackBerry Messaging (BBN). Presumably he was sending texts to the guys at Turn 4 saying “Got any retirements yet?”