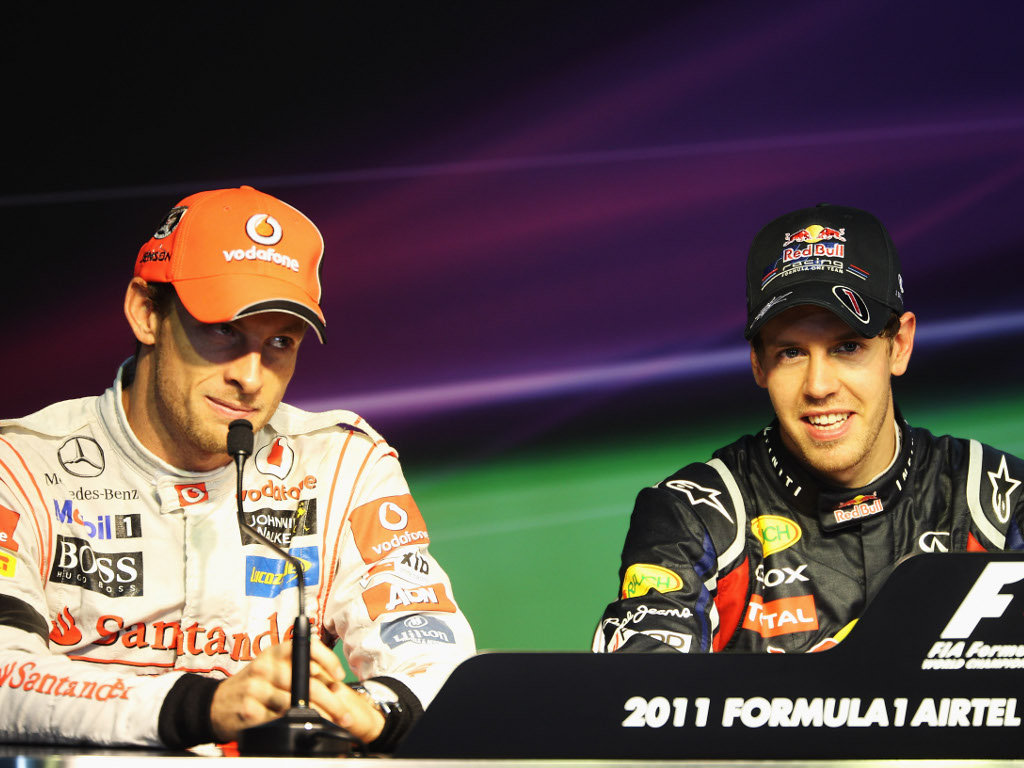 Seb, Jenson and Jaime were winners, while a bitter Felipe Massa reported two sets of kerbs to the stewards…

Seb, Jenson and Jaime were winners, while a bitter Felipe Massa reported two sets of kerbs to the stewards…

Star of the Race
Sebastian Vettel, Red Bull, 1st
Impeccable. It’s all been said already, hasn’t it. Pole (easily), led into first turn (comfortably); led the entire race (assuredly); fastest lap (despite being warned against it). Now he has Nigel Mansell’s most laps led in a season record and is presumably closing in on most poles in a season. Yet he’s still engaging, enthusiastic and has the bottle to completely ignore instructions from his team and put in two successive fastest laps on the last two laps of the race. Where did Formula 1 go so right?

Overtaking Move of the Race
Lap 1: Jenson Button, McLaren on Mark Webber, Red Bull
Button’s overtake of Webber on the opening lap was crucial for his race. He passed Webber on the outside into Turn 4 without the benefit of DRS and getting his braking on full tanks exactly right. Given how wide the circuit is, it was a major disappointment that more passes weren’t attempted. What we need for next year is SuperSoft tyres and a pressure-cleaner roadsweeper.

Winners
Jenson Button, McLaren, 2nd
The Button surge continues. Once Jenson had put in some heroic defending against Mark Webber from laps 4 to 7 he was able to edge a gap out and then concentrate on catching Vettel. He was able to put in fastest laps between Laps 10 and Laps 13, but from that point on it was Vettel dictating the pace.

Fernando Alonso, Ferrari, 3rd
A surprisingly slippery opening corner put the kybosh on Fernando’s afternoon. Without an abrasive surface to complicate the strategy it became like an old Bridgestone race where mistakes made on the opening lap were very difficult to recover. Still a great result from what was potentially the fifth fastest car.

Michael Schumacher, Mercedes, 5th
Another superb start from Der Openinglapmeister, from that point onwards he sat a few seconds off Rosberg and waited and waited with all the patience of an experienced fly fisherman waiting to reel in his team-mate’s position. You can’t help but feel that his engineer had some kind of financial stake in him getting in front of Rosberg – we’re used to hearing detached information given over team radio, but today we got a bit of glee thrown in.

Nico Rosberg, Mercedes, 6th
Great qualifying from Rosberg and he must have thought with Michael qualifying 12th at least this race he wouldn’t have the old bu**** filling his mirrors. The removal of Petrov down the grid probably made all the difference.

Jaime Alguersuari, Toro Rosso, 8th
Given the fast flowing nature of Buddh its no surprise that cars that excelled at Spa should do well here. Alguersuari had the benefit of qualifying nowhere near Bruno Senna and a Ferrari engine that lasted the whole 60 laps.

Adrian Sutil, Force India, 9th
Sutil will have enjoyed coming home in the points and outshining (the most likely to be retained) Paul diResta at the team’s home race in front of the new co-owners.

Sergio Perez, Sauber, 10th
Perez pitted after Lap 1 to get rid of his hard tyres and put in a brilliant drive to claim 10th place.

India
It may have been dusty, but it was a triumph. Let’s hope it’s not like Korea, turning into a one-race wonder. The critical year isn’t the first year, it’s probably going to be the second or third. Turkey, Korea, Malaysia and China don’t have F1 drivers to boost the home crowds but India realistically has a long-term prospect in Karun Chandhok. The sooner he can get a race seat the better.

BBC Coverage
The feature material supporting this race was fantastic – the Bollywood sequence, the circuit walk, DC’s laps of Austin. No other sport on television has this degree of intimacy with the main protagonists or the innovation of the feature items. Sky are going to have their work cut out to come close to the standard set by the BBC. Interestingly there have been reports linking Brundle to a