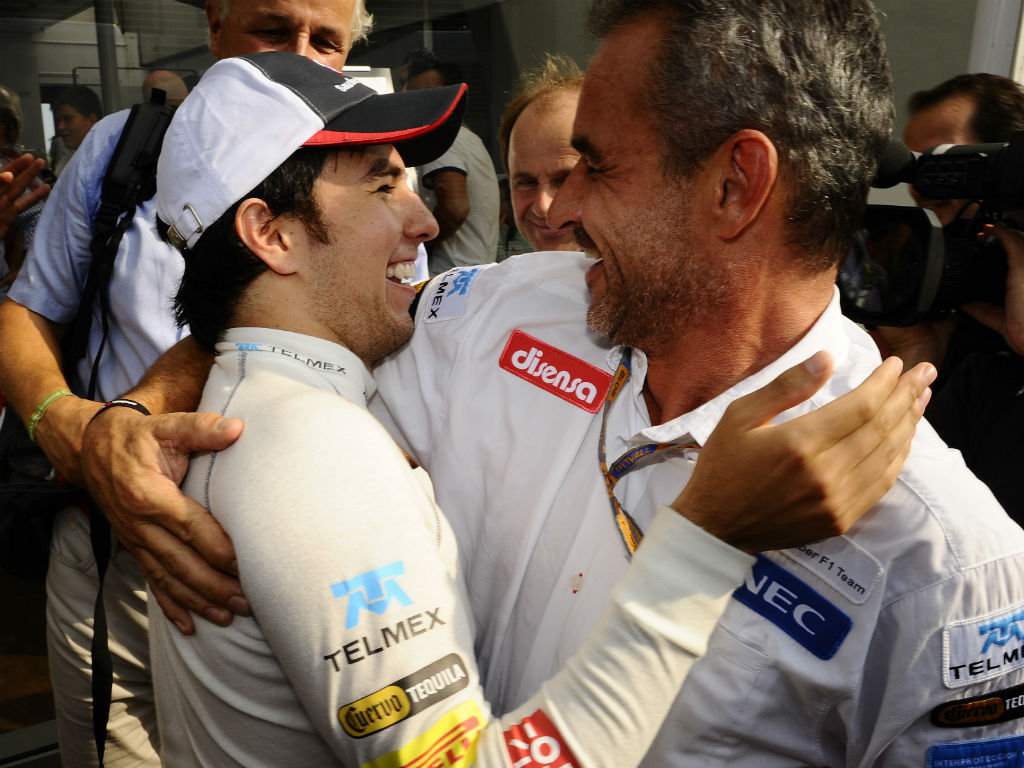 Lews Hamilton might have dominated the race, but for performance of the day, quite clearly, it was Checko Time.

Lews Hamilton might have dominated the race, but for performance of the day, quite clearly, it was Checko Time.

Star of the Race
Sergio Perez, Sauber, 2nd
What a difference a week makes. Seven days ago the three drivers on the podium for the Italian GP were all back in their respective teams’ motorhomes watching the Belgian GP go on without them. And whereas Lewis Hamilton was expected to do well in Monza and Fernando Alonso always looked capable of a Top 3 finish, the same couldn’t be said of Sergio Perez. Even after he led the race from Laps 22 to 29 the experienced pundits were suggesting that he’d probably end up somewhere between P6 and P8.
Then he strapped the medium tyres on and the Sauber was transformed. He put in a succession of fastest laps from Laps 37 to 39 – a 1:28.663, a 1:28.128 and a 1:27.846 – at that stage he was a second a lap quicker than Alonso and 1.3 quicker than Massa. On Lap 40 he was a second quicker than Massa in Sector 2 alone!
It was an amazing drive and should have convinced the Ferrari hierarchy that ‘Checo’ has the racecraft to sit in a red car in 2013. The only question mark is his ability to qualify the car because in both of the last two races Kobayashi has been significantly quicker on the Saturday.

Overtaking Move of the Race
Lap 19: Jenson Button on Felipe Massa for P2
Sergio Perez had already overtaken Raikkonen on the outside at the often problematic Variante della Roggia (second chicane) but the Mexican had the benefit of hard tyres that would see him through another 12 laps. Button and Massa were on the same compound as the McLaren driver pulled alongside the Ferrari through the Curva Grande and was already past him before the braking zone. Button made a very tricky move look effortless.

Winners
Lewis Hamilton, McLaren, 1st
The new improved Patient Lewis managed to keep his foot off the pedal and eek out the opening stint gap (to Massa) in increments of 0.2 here and 0.3 there. He had it all under control. At the end of the race when Perez was getting closer he responded by putting in one personal best sector time per lap – the fact that he could do it in any of the three sectors showed how much under control he was.
If Lewis is seriously thinking about going to Mercedes and it’s not just a negotiating ploy to increase his salary, then he should take a look at where Ross Brawn’s team are in the Constructors’ championship. Three years with a supreme motivator like Michael and they are still back in an irredeemable fifth place. Does Lewis think his own brand of motivation – WTF, here are the telemetry traces everybody – will produce Schumi-like devotion to a talismanic figure…?

Fernando Alonso:
A superb start and opening lap from Fernando who was out of place in P10 on the grid, but not in that place for very long. Whereas last weekend he was unlucky and lucky – unlucky to get hit by a flying Lotus, lucky he didn’t sustain a serious head injury – this weekend fortune smiled. Three of his major rivals failed to finish including the car that would have kept him off the podium. You can’t imagine the tifosi going wild to celebrate a McLaren 1-2 and just the Ferrari engine of Perez in P3.
I’m still not quite sure what he meant about Vettel spoiling his race for 10 laps, he made the attempted pass on Lap 26 and got by him at the start of Lap 29. Vettel is still allowed to be there, even if it is Italy. In fact Alonso looked almost disappointed that Vettel had retired because it meant that the penalty he received didn’t count for anything.

Felipe Massa, Ferrari, 4th
Ferrari will be glad that Felipe Massa has produced the goods for two different reasons. One, because they want to finish as high as possible in the Constructors’ championship. Two (and you’ll understand this is more of a guess) because as long as Felipe is doing well he can invest in the idea he’ll be a Ferrari driver next year and so will do his best to help Fernando. Had he put his F2012 in the gravel or performed badly then he would know for sure his time was up and the motivation would go down. From Ferrari’s point of view, you can understand why they would want to delay giving him any bad news. As many people have pointed out, at this point in the season, the Italian GP, the team would usually have confirmed their drivers for 2013. However if he can keep this proximity to Fernando for the rest of the year, maybe it’s better the devil you know.
For stats fans, this is supposedly the longest period of races that a Ferrari driver has failed to stand on a podium. The last time that Felipe got his hands on a gratis magnum of champagne was in Korea 2010. Ironically, that was the last race where both Red Bulls failed to finish a race.

Kimi Raikkonen, Lotus, 5th
Like the daggy bits of wool round a sheep’s arse, you just can’t get rid of Kimi Raikkonen. He’s always sticking around. This race was a surprise in that the Lotus was NOT kind to its tyres when the circuit got hot and he just about hung on to 5th place. It would be amazing if Kimi could win the World Championship without winning a single grand prix. Almost Nelson Piquet-esque.

Michael Schumacher, Mercedes, 6th
Sixth place may not be a great return from 4th on the grid, but a one-stopper was never going to be an option the way the W03 eats up its tyres. Schumi had some late race fun on his fresh set of Mediums and almost climbed to fifth.

Losers
Jenson Button, McLaren, DNF
Button muffed his start and left the door open for Massa, but after that drove impeccably. Following the pit-stop he was just about closing the gap to Hamilton and it looked like cruise control all the way for a McLaren 1-2. His fuel supply thought otherwise.

Sebastian Vettel, Red Bull, DNF
Vettel has every right to be aggrieved that he was given a penalty for pushing Alonso out wide on Lap 26. If it wasn’t a penalty last year when Alonso did the same thing to him in almost the same place, then why is it a penalty this year? It wasn’t an unreasonable decision, what Vettel did looked dangerous. But Alonso should have been penalised last year as should Michael Schumacher for a similarly dangerous block on Lewis Hamilton in Curva Grande. And Paul DiResta’s block on Bruno Senna that forced him off the road should at least have been investigated even if the stewards ultimately decided to do nothing.

Mark Webber, DNF
Poor qualifying and a bad start compounded the misery for Mark who was a shadow of his Silverstone self. In a lot of the post race interviews recently he looks like a man suffering a bereavement. Lee Mckenzie needs to put that generously proportioned arm round him.

Paul Di Resta
‘Captain Gloomy’ made a very effective mark on Saturday by qualifying his car in P4. Following his disappointing result in Spa, where a lack of KERS allowed Nico Hulkenberg to