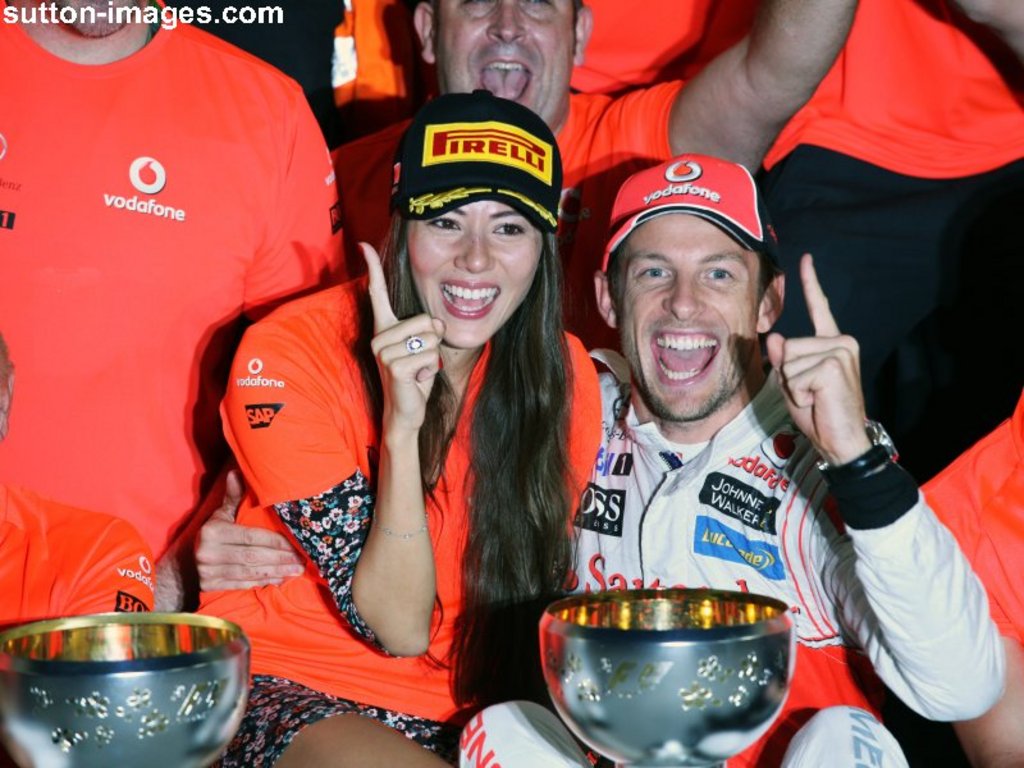 Japan was the big winner in Suzuka. Mr Michibata won, Seb was crowned, Ferrari were resurgent and we got handbags too!

Japan was the big winner in Suzuka. Mr Michibata won, Seb was crowned, Ferrari were resurgent and we got some entertaining handbags

Star of the Race
Jenson Button, McLaren, 1st
When Jenson announced that he was quitting Brawn and moving to McLaren at the end of his World Championship-winning season in 2009 there were many – Jackie Stewart particularly – who questioned the wisdom. McLaren was firmly Lewis’s team, what WAS he thinking? Now, with a multi-year contract in his pocket, three storming wins in 2011 and a decent qualifying performance for once, Lewis Hamilton looks like the outsider.
It was entirely fitting that Jenson take the win, he was fastest in all three practices, only lagged Vettel by 0.009 in qualifying and clocked up the fastest lap of the race. He also fought back from a dodgy startline manoeuvre from Vettel that drew the comment from Jenson in the pre-podium lounge: “so that’s how we’re racing, then…”
Button’s car may not have been fully alongside Vettel at the time he shoved him towards the grass, but his front wheel was parallel to Vettel’s rear wheel and if he had left it there, the whole of Button’s car would have been sent into the scenery, not just the bit that was overlapping. It would have been tough to penalise Vettel for the move when so much goes on at the start, but Fernando Alonso fans will point to the fact that Vettel makes a lot of noise when it happens to him (i.e Alonso vs Vettel at Monza).
Button’s race after that was patience and he got his just rewards. There were exceptionally touching scenes afterwards when he finally got released from talking to the media and was reunited with girlfriend Jessica. It almost felt like you were intruding on a very private moment. “I’ve never seen the missus cry at a race before,” he confessed afterwards, “don’t go on about it because I’ll start, too.” The right man definitely won.

Overtaking Move of the Race
Lap 46: Adrian Sutil, Force India, on Kamui Kobayashi, Sauber
Mark Webber pulled another typically courageous overtaking move on Adrian Sutil, sailing up the inside of the Force India driver into 130R during the race. Sutil looked to be a lot slower and pitted straight after for tyres, so it wasn’t the very best overtake into one of F1’s legendary corners. In fact you could argue that Mark making it past Lewis in the last few seconds of Q3 was the overtaking move of the race weekend. It certainly stopped Lewis grabbing pole.
Back at 130R, when Sutil came up behind Kobayashi, the two were more evenly matched and Kobayashi would not have wanted to lose face in front of the home fans but Sutil made a great move to send one up the inside.

Winners
Fernando Alonso, Ferrari, 2nd
Two seconds away from a race win? Not bad for a car that isn’t being developed. Unlike Red Bull, Ferrari aren’t flying out new front wings by private jet to Suzuka, yet they were very close to achieving a memorable race win at a grand prix Red Bull are supposed to own. Alonso had the helping hand of a Safety Car and a team-mate who’s obliged to move over but most of the result was down to Alonso’s dogged determination and some smart strategic calls from Stefano Domenicali. And the car looked good on medium tyres.

Sebastian Vettel, Red Bull, 3rd
Vettel’s World Championship win was as inevitable as Lewis Hamilton colliding with Felipe Massa. The way Seb was driving he didn’t look like he wanted to settle for P3 behind Alonso, but with Jenson in the lead and the World Champion T-shirts already printed, he wasn’t going to risk a 50/50 with a man for whom second place was an important result.

Mark Webber, Red Bull, 4th
Webbo had a ‘touring car-style’ collision with Schumacher in the race that looked just as strong as Hamilton’s impact with Massa last week, the difference being that he only managed to lose a chunk of his front wing and not half of it like Hamilton. Schumacher didn’t get a puncture despite a rear-end slide, so ultimately it was no harm done. Instead of the ‘handbags’ we associate with Hamilton (bit of a Diva) and Massa (Queen of handbags) we got a grin from Mark afterwards and a, “yeah we made a little bit of contact…but he knows all about that.” Which is a much simpler way of dealing with things.

Lewis Hamilton, McLaren, 5thM
Another quiet weekend for Lewis, an uneventful qualifying followed by a processional, incident-free race. Great to see him enjoying his racing again…As if.
It all stemmed from his inability to get pole. Lewis ultimately blamed himself for his failure to get another lap in at the end of Q3 on Saturday, but he was being too hard. As he approached the final chicane Jenson Button was only about 150 metres ahead, so he couldn’t have gone that much quicker on the lap. Michael Schumacher’s ludicrous notion that Lewis pushed him onto the grass was well below his stature. What Hamilton was doing was making room for Mark Webber who had dived up the inside.
In the race Lewis was unfortunate to get a puncture, but fortunate to get it just about when he needed to change tyres. From that point on his race got worse and worse. His collision with Massa was clumsy and had a dreadful inevitability about it. He held on to P5 at the end of the race.

Michael Schumacher, Mercedes, 6th
A good race for the old fella who claimed a new F1 record, the oldest driver to lead an F1 race with or without a colostomy bag. In fact he did very well after a mid-race thump from Mark Webber’s front wing threatened to shred his rear tyre. Michael’s Sunday performance made up for the seven times World Champion’s Saturday miscalculation. If Mercedes were only going for a jolly tour round Suzuka in Q3 to beat the cars that weren’t going to complete one entire lap – Petrov/Senna/Kobayashi, why leave it till the very last minute?

Sergio Perez, Sauber, 8th
Given how ill he sounded this was probably Sergio’s most impressive race to date. The two-stoppers were definitely helped by the emergence of the Safety Car, but Kamui started 7th and finished 12th on two stops, while Sergio started 17th and finished 8th.

Losers
Kamui Kobayashi, Sauber, 12th
The moment got to Kamui and from his best ever grid slot he shot backwards from the start to finish the first lap in 12th. And while Perez made his way quietly though to P8 on a two-stop strategy, Kamui struggled.

Force India, 11th and 12th
Given that DiResta and Sutil were 8th and 9th after the opening lap it was a poor result. The Safety Car put paid to their strategy and they had to watch Sergio Perez pick up points that on sheer speed should have been theirs.