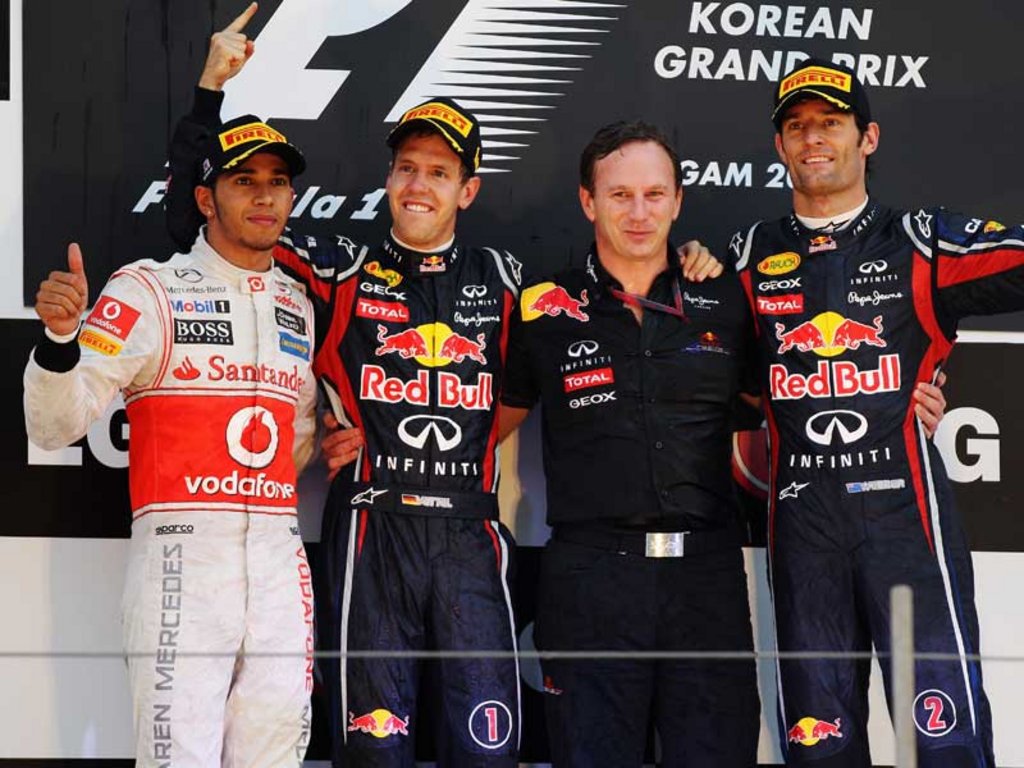 Sebastian was happy at the end of the Korean GP and strike a light, Lewis Hamilton managed to be marginally less miserable!

Sebastian was happy at the end of the Korean GP and strike a light, Lewis Hamilton managed to be marginally less miserable!

Star of the Race
Sebastian Vettel, Red Bull, 1st
Vettel drove another perfect race. The Red Bulls’ margin was highlighted by his final Fastest Lap when he decided to take himself off the leash and worry all the people looking at his telemetry. His final lap was a 1:39.605. The lap before, Lewis Hamilton had used as much of the McLaren’s resources to record the previous fastest lap of the race which was a 1:40.459. And you can bet Lewis wasn’t holding back in his attempts at keeping Mark Webber behind.
Vettel’s achievements against a badly understeering McLaren were put in context by the fact that his team-mate couldn’t find a way past Hamilton, despite many many laps of contemplation.
On the opening lap Vettel used his KERS wisely to get a boost out of Turn 3 and into Turn 4 and it worked brilliantly, he was through. Hamilton admitted that he probably left too much room up the inside, but also that Seb would have found a way past sooner or later.

Overtaking Move of the Race
Lap 34 Webber versus Hamilton
This was a score draw between Mark and Lewis. Hamilton put up a stirring fight to hold on to P2, but Webber looked like he had finally nailed it on Lap 34 after their second round of pit-stops. Hamilton had done the difficult bit, staying ahead into Turn 3 and into Turn 4, but then locked his wheels and ran wide on the exit, allowing Webber to close and nip inside for Turn 6. (A bit like the opportunist move he’d put on Alonso in Singapore). That looked to be that…except Lewis wasn’t having any of it, cut up the inside and then was in the perfect position to defend through a series of turns which ultimately played out with him in front after Turn 12. It was edge-of-the-seat stuff and one of the best sequences of the season. Ultimately you thought it would be a short-lived victory as Mark would surely turn the Red Bull’s pace to his advantage before the end of the race…

Lewis Hamilton, McLaren, 2nd
Given that he had Mark Webber breathing down his exhaust from Lap 28 this was a remarkable defence of second place. Lewis’s drive was every bit as good as Sebastian Vettel’s and he genuinely looked pleased as they assembled to go on the podium afterwards. By the time he’d got to the interviews he’d remembered he had to be gloomy and introspective, but for a short while he looked uncomfortably happy.
Lewis admitted to turning every dial available to counteract wicked understeer and the timing for the last sector said it all. Mark Webber was regularly 0.4 and 0.5 quicker than the McLarens in what was only a 20-second sector, which was the reason he always got close to Lewis at the end of the lap through the fast final turn and why Jenson Button could never get close. And McLaren must have improved his mirrors from Suzuka because he had no problem working out exactly where the Red Bull was for half a race…

Mark Webber, Red Bull, 3rd
Webbo got a good start for once and managed to retrieve third place on the opening lap when he’d been demoted to fifth by Felipe Massa at Turn 3. Christian Horner was lavish with praise after he crossed the line – his third place ensuring the Constructors’ title, but he really should have been second.

Jenson Button, McLaren, 4th
Button’s been mugged on opening laps a few times this season and it was his tentative braking on full tanks into Turn 3 that sparked it all off. He thought afterwards that even if he’d kept third on the opening lap that fourth place was where he would have finished and was afflicted by the same chronic understeer that beset Lewis. Had the Yeongam circuit really been the tyre shredder it was meant to be then he might have made progress, but a four-five stop race rapidly became a two-stop race.

Fernando Alonso, Ferrari, 5th
Alonso drove astonishingly well to put himself on terms with Jenson Button at the end of the race. That fiery performance can only have been stoked up by his early race failure to get past Massa – whether because of his (new, not so fast) front wing or an inability to swing the change on the pitwall. It was noticeable that the moment Massa disappeared from in front of him to change tyres on Lap 34 Alonso became a new driver setting two consecutive fastest laps on old tyres. Asked afterwards if he could have gone faster when he was behind Massa he said no, he was struggling with tyres. The tyres that gave him fastest laps on Lap 35 and Lap 36. Once in front he put in what he described as “qualifying lap after qualifying lap” until he nearly lost it a few laps from home and we got the very un-Fernando-like radio message – “I give up, I give up!”
Brundle thought it sounded like a fit of pique and it had the same tone as Fernando enquiring about Lewis and the Safety Car from Valencia last year, or further back in time, asking Renault to move team-mate Fisichella out of the way at the Canadian GP. The idea advanced by Coulthard that this was a ruse sent to distract McLaren and make Jenson Button lower his guard was laughable – as though Jenson’s engineer might go on the radio and tell him that although Alonso was 1.2 seconds behind he had actually given up the chase. At the flag Alonso was just 0.9 seconds back.
And is it just me or is he sounding more Italian these days? After the race he said “I wasn’t quick until-a the lasta steent.” Presumably, then, nobody told him about those two fastest laps.

Felipe Massa, Ferrari, 6th
No collisions with Lewis, so that’s a good start. Felipe’s opening sector was brilliant. The judgement of braking into Turn 3 was an absolute masterpiece. He was dodging about on the straight behind Mark Webber, keeping Fernando on his toes behind, then he sent one up the inside and passed two cars in one corner. And he was given the opportunity to race Fernando – we knew that because he was doing the stuff that other normal drivers do, like block their team-mates.

Jaime Alguersuari, Sebastien Buemi, Toro Rosso, 7th and 9th
A great result for the Toro Rosso team in what is becoming the best fight on the grid.

Stewards
A pretty efficient race from the stewards – I’m still trying to work out how unsafe a release has to be these days before it’s deemed ‘officially unsafe’. Presumably releasing a car into the path of two cars already running side by side down the pitlane – such as Rosberg and Button – would be unsafe.
I only mention this because a large section of this feature is normally reserved for moaning about stewards and events in the Rugby World Cup on Saturday put my moaning into proportion. The decision to send a Welsh player off after 20 minutes – instead of putting him in the sin bin – effectively robbed Wales of the game and the tournament of a proper final. They only have a