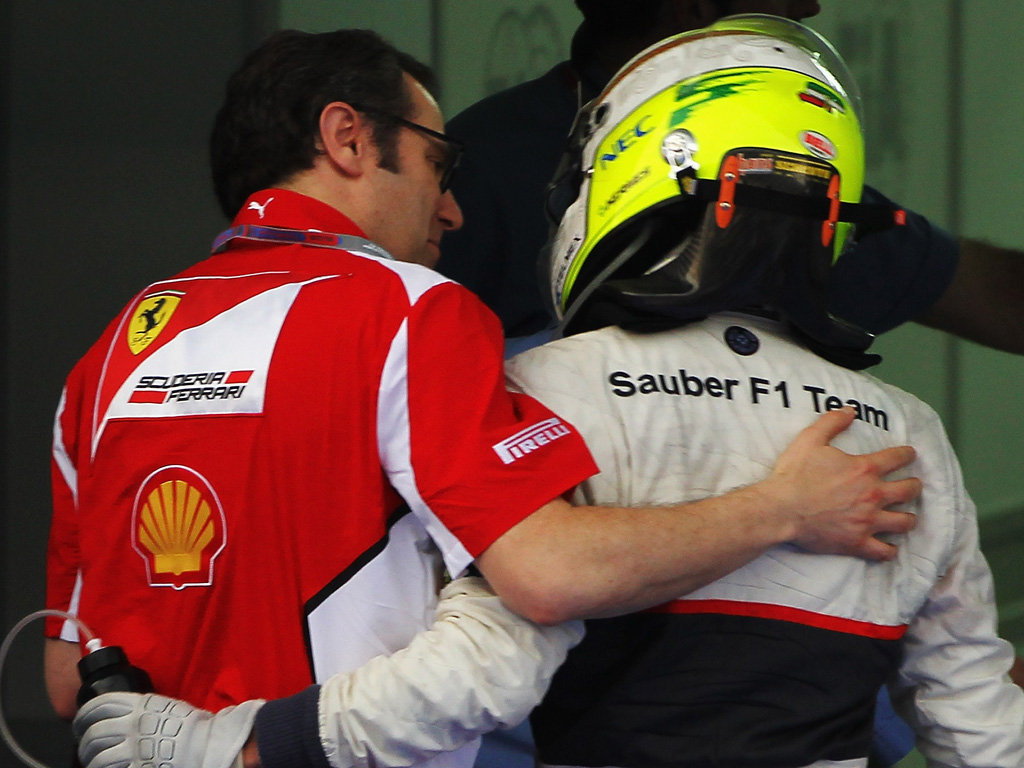 An epic race and a historic result. Alonso got the victory but Perez got the accolades. We never knew Peter Sauber could get so emotional…

An epic race and a historic result. Alonso got the victory but Perez got the accolades. We never knew Peter Sauber could get so emotional…

Star of the Race
Sergio Perez, Sauber, 2nd
It’s a funny old game isn’t it. Sergio Perez hadn’t completed a single lap before diving down the pitlane for some wet tyres – and whereas Ferrari’s Rob Smedley had been telling Felipe Massa that he’d soon be back into the pits to change his Inters for Slicks, here was Sergio going the other way. He had no firm idea the rain was going to intensify. It did. And now he sits on the brink of a Ferrari race contract – whether this year in a seat swap with Felipe Massa or in 2013. (The rumours that Ferrari have already signed Robert Kubica will surely be spiked now.)
And he should have won. Sauber did two things that will feed the conspiracy theorists into a frenzy over the next three weeks. The theory being that Sauber threw the race for their engine supplier. They brought him in for dry tyres groaningly late when he was just 1.3 seconds behind Alonso – as a result he lost 4-5 seconds, which he then recovered. They then gave him a very clearly enunciated message: “Checo, be careful. We need this position. Be careful.” And he then ran wide and lost all hope of catching Alonso in the closing stages. After the race when asked a couple of questions about the protocol of that message, he smiled and made his excuses to get away from his inquisitors David Coulthard and Jake Humphrey and sprinted off down the paddock.
Normally Sauber are very conservative about their tyre changes, but why would a team that have gambled on changing Sergio Perez’s tyres on Lap 1 not risk a further throw of the dice and stop as early as Alonso. There were already those that stopped earlier and he was not going to be caught by Hamilton who was ten seconds in arrears…?
Given Peter Sauber’s history in motorsport it would be hard to imagine him ever making that kind of call. The fact that he was in tears at the end said much. And where Perez went off was not the kind of place you would want to try and lose time – much better to go too deep and miss your braking into a nice slow corner that had a big fat tarmac run-off, not one with gravel just yards beyond.
And Sauber really do need the points, everyone hung their heads last week when Maldonado threw away 6th place for Williams, how much worse would it have been for Perez to chuck away 2nd place. It wasn’t like he was racing just anybody, he was racing the best driver in F1.

Overtaking Move of the Race
Lap 35: Jenson Button on Felipe Massa
Button takes it ahead of Vettel’s pass on Rosberg and Alonso’s move on Perez (emerging from the pits).
Alonso’s pass was beautifully clean but Perez wasn’t really up to speed and was coming into Turn 1 on a very tight line.
Vettel came up against a Nico Rosberg who had just gone a second slower than the car in front in the middle sector alone and so his tyres were fading fast
Massa presented a bigger obstacle. Button tried to go round the outside of him into the final hairpin and Massa chopped across, not leaving the car’s width to the edge of the circuit that could have been the interpretation of the new 2012 rules. Never mind there was always the DRS of the start/finish straight into Turn 1 which has the traditional two lines – the inside line and the outside ‘karting line’. Massa defended on the inside, Button went to the outside and then found Massa drifting across mid-corner as though he rather fancied changing lines. Button kept his foot stuck in and got the inside for Turn 2 and was away.

Fernando Alonso, Ferrari, 1st
Hard to imagine that Fernando Alonso was driving the same car that Felipe Massa struggled so badly with. Alonso did what only the best drivers can do, that is to win in a car that clearly wasn’t the fastest. He held on against Perez and scored a victory that many thought wouldn’t come at all in 2012. To do so by the second race of the season and then lead the World Championship is nothing short of remarkable given their winter testing. It wasn’t miraculous, because miracles are god given and Alonso worked very hard for what he got.
In many ways it was a shame that Perez slipped off track when he did because it denied us an epic last six laps in which Alonso could have shown his virtuosity at defending. Probably better for Stefano Domenicali’s cardiologist that it worked out like it did.
This is why we love F1 so much. Already in two races we have shrugged off the monochrome predictability of last year.

Lewis Hamilton, McLaren, 3rd
In interviews after the race Lewis Hamilton was going on about how he lost various bits of time here and there in the pitstops. Had he spent 56 laps with his nose glued to a timing screen he would have seen that he was losing time all over the place to Perez and Alonso – surprisingly often in the middle sector where McLaren were supposed to reign supreme. It was no different for Jenson. What Mclaren DO have to take away from Sepang is the sure and certain knowledge that they can compete against Red Bull on circuits with high-speed corners as well as squirty traction tracks like Melbourne. It’s not going to be raining every Sunday till November.

Mark Webber, Red Bull, 4th
Every indication is that we’ve got the 2010 Mark Webber back again and not the 2011 version. This one has got a lot more confidence in the car – outqualifies his team-mate and outraces him. It’s a lot more fun when the 2010 one turns up. And his start was great.

Kimi Raikkonen, Lotus, 5th
Kimi gave the impression that he was unhappy to be so far back in fifth place. After the race he complained about his vision and his visor fogging up, but that didn’t stop him from claiming the fastest lap. You’d certainly bet on him getting onto a podium by the end of the year providing Lotus can keep up with the big teams in the development stakes.

Bruno Senna, Williams, 6th
A great race from Bruno who survived having his front wing getting knocked off by his team-mate on the opening lap. His pass on Paul DiResta looked effortless. A promising comeback after Melbourne when he took a similar early return to the pitlane.

Paul DiResta, Force India, 7th
We didn’t see a lot of the Force India cars in the race, but Paul made steady progress after ending Lap 1 in P12.

Jean-Eric Vergne, Toro-Rosso, 8th
Vergne may have lucked himself into a free pit-stop (a new set of wets) after the race was halted behind the Safety Car, but it was a mighty effort to keep his car on the track before Charlie threw the second (this one’s serious, this is for real guys, no honestly, promise) Red Flag. With the chequered flag approaching it looked like he was about to be mugged of his points again by Hulkenberg and Maldonado, but one was short of pace and the other was short