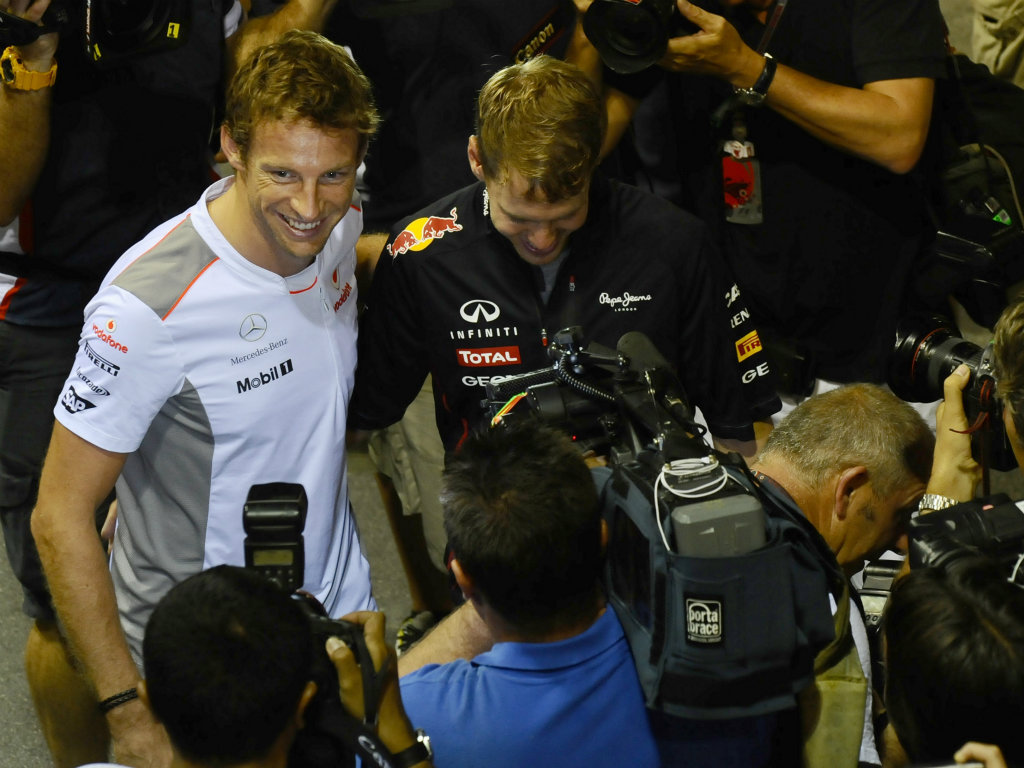 Vettel returned to winning ways courtesy of Hamilton’s disintegrating ‘dif’. He should get a ‘magic dif switch’ like other teams…

It was another exhilarating race under the lights in Singapore. The ‘Monaco of the East’ makes the real one look like a model village.

Star of the Race
Paul Di Resta, Force India, 4th
Paul Di Resta didn’t get involved in much of the wheel-banging, wing-snipping argy bargy that went on throughout the Singapore GP. It was a performance that was assured right from an excellent qualifying result through to an error-free race drive. If you wanted to be critical you could say that once he’d got ahead of Alonso at the start he should have held on to that place – but keeping a supercharged Alonso behind you on an opening lap is like trying to keep mercury in the palm of your hand; a rare feat. But not quite as poisonous.
In a week that may or may not see Lewis Hamilton confirmed at Mercedes, this was the perfect c.v. for Martin Whitmarsh’s in-tray. Not only is he a brilliant driver (and able to be schooled in the McLaren ways by fellow Scot David Coulthard), he has a rare gift of monolobial and bilobial hearing: “Anyone with advice for me,” said Paul, “I’m willing to listen with both ears.”

Overtaking Move of the Race
Lap 43: Felipe Massa, Ferrari, on Bruno Senna, Williams
On most race afternoons a dawdling, puncture-enforced return to the pits on the opening lap would mean a grand prix spent checking out Marussia and Caterham rear wings and waiting to see what bizarre extreme strategy your team was going to throw at you – and then getting lapped and a dismal finish in the late teens. But P24 was no barrier to Felipe in Singapore, especially when two Safety Cars brought him back in contact with the rest of the gang to claim P8.
He had the advantage of fast, Super Soft tyres when he came upon Bruno Senna in P9 on Lap 43 and despite Senna going defensive through a succession of corners, Felipe stuck it up the inside going from Turn 12. When Bruno Senna moved across to the barrier to take his normal racing line, he found a Ferrari in between him and the Tecpro and the two made brief contact. Felipe kept his foot in, corrected a snap wobble and made the pass into Turn 13, a place where no-one overtakes.
The best bit, though, was the replay of an open-mouthed Rob Smedley watching him from the pratt stand and slowly shaking his head. Unfortunately there’s no Geordie equivalent of “Bravissimo!” which Fernando gets from Andrea Stella. “Worrr, get in there my son!” isn’t quite so classy.

Sebastian Vettel, Red Bull, 1st
A return to winning ways after the frustrations of Monza. Given that he couldn’t take advantage of a McLaren with a failing gearbox – he never got within the DRS in the second stint – it’s fair to say that he only won thanks to Hamilton’s demise. Even so, they were pretty evenly matched and Seb made no great errors.
The latest evolution of the Vettel helmet – with funky LEDs – shows that drivers can create interest by innovation. Martin Brundle has been whingeing for a long time that he prefers the way it was in the old days when drivers had one helmet design a season and stuck to it. Times have changed, we no longer have messenger boys, traction engines and gas street lamps. But what Vettel really should do is take it one step further and have a helmet that is linked to his throttle map and changes colour with his revs.
Fernando has suggested that this race at 300km should be made shorter and he’s got a point. It does go on a bit. It’s the first dry race since Phoenix in 1991 that has gone to two hours and when it’s coupled to the Austrian national anthem afterwards, people have to start re-arranging flights.

Jenson Button, McLaren, 2nd
Not such a bad race for someone who was in a different time zone when it came to qualifying on Saturday. After the race, when there was further quizzing of Martin Whitmarsh about Jenson’s ‘mathematical chances’ of winning the championship, i.e. whether he was going to hand points to Lewis now, Martin paid a remarkable tribute to Button. “Jenson has had a conversation with me about it. I don’t want to ask, I don’t want to have to ask, but Jenson came to me. He is a great enough team player to do the right thing for the team. He’s an extraordinary human being.”

Fernando Alonso, Ferrari, 3rd
Fernando got another great championship result with only one of his serious rivals scoring more points than he did. The only drawback is that it was his most serious rival of all that scored them. It was a surprise to see Fernando stop as early as Lap 11 because at that stage he was beginning to lap quicker than the cars in front of him and when he stopped on Lap 29 he looked set for three-stopper against Vettel/Hamilton/Button’s two-stoppers. The first Safety Car changed all that and gave him the longevity, the lack of constant heat degradation in that set of Soft tyres to run for 30 laps. He had to work a bit harder than some of the cars around him, especially when he came out after the first stop, but it was another strong race performance. That’s if you discount the first 200 metres. His getaway was poor, but his move after that was almost catastrophic. He moved left and suddenly the three cars side-by-side on his inside had to go very narrow to avoid being concertina-ed into the pitwall. Thankfully nothing happened, but one more metre and what happened at Spa three weeks ago would have been a mere bagatelle compared to this.

Nico Rosberg, Mercedes, 5th
Rosberg got away with a mass trespass over the run-off at Turn 1 on the opening lap. Six cars took the easy route across that strip indicating to the race organisers that maybe it’s time for a re-think with some Monza-style bumps to make it less attractive. Rosberg and the two Safety Cars helped add some more lustre – lacking of late – to Ross Brawn’s strategy calls, after he called it right in Italy as well.

Kimi Raikkonen, Lotus, 6th
Kimi won’t be happy with sixth. That’s why it was particularly disappointing not to see his post-race interview.

Romain Grosjean, Lotus, 7th
Romain will be happy with 7th. He played the team game and kept out of trouble at the start – a start that was far from easy.

Timo Glock, Marussia, 12th
A fantastic result for Timo Glock and the Marussia team. Glock had a happy bounce off the Tecpro barrier at Turn 18 in the race. “I only kissed it,” said a smiling Timo afterwards. “Kissed it? I wouldn’t like to see the way you kiss,” said a smiling Jake Humphrey in the BBC forum afterwards. (We are going to miss JH after he goes to BT Football next year)
Marussia have now overtaken Caterham in the table and the worrying thing about their success is that with the Virgin organisation still holding an interest in the team, we might see Richard Branson back on the grid.

Pastor Maldonado, Williams, DNF
He may not have scored any points, but he drove a sensible race after a quite brilliant qualifying