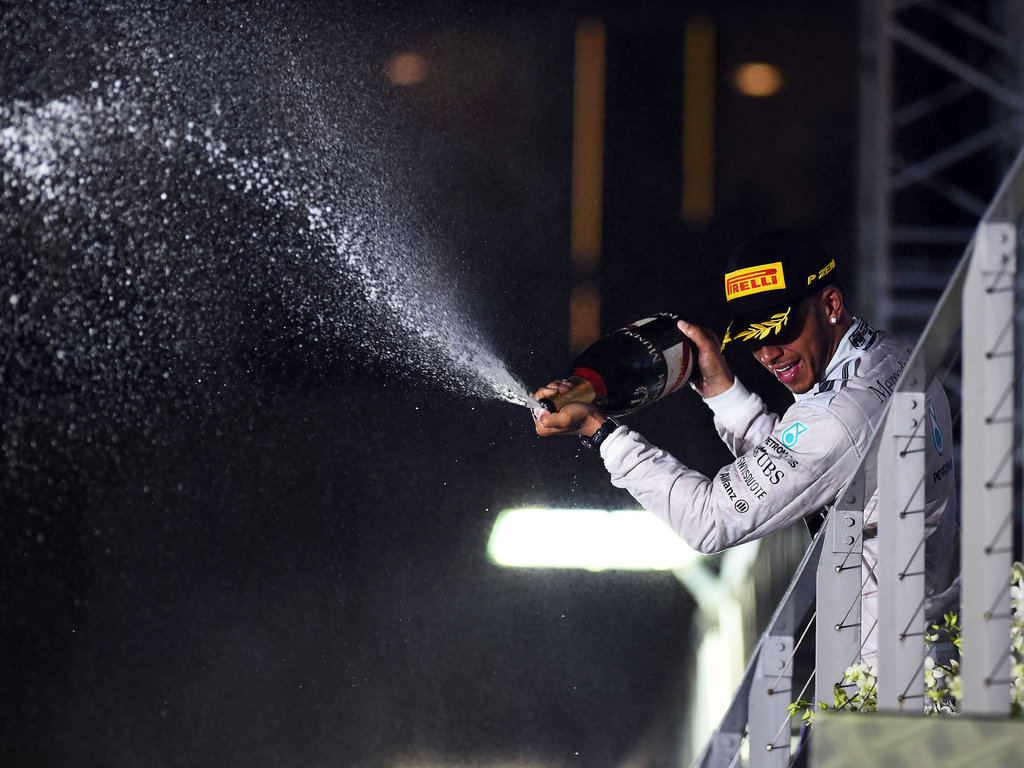 F1 race strategists may use algorithms and ‘Latin hypercube sampling’, but tossing a coin would probably have got the same result on Sunday…

Star of the Race
Lewis Hamilton, Mercedes, 1st
Lewis maintained the high pedigree of the Singapore Grand Prix Winners Club by making it seven World Champions in seven races. Only he, Seb and Fernando have won at Marina Bay before and for much of the afternoon that looked like being the podium. Obviously his job became a lot easier the second he pulled away on the parade lap and left his team-mate searching for a gear.
Lewis’s biggest threat, after Vettel went backwards in the first stint, was a badly timed Safety Car and we almost got one. After the team made the decision to keep the No.44 car out, Lewis was constantly questioning the strategy, something that almost all the top ten drivers were doing in a race when (ironically) engineers were nervous about giving out too much information. In a race where drivers really did need to rely on what they were being told, there was a certain coyness about team radio.
Once the Safety Car came in at the end of Lap 37 Hamilton produced a devastating series of laps to create his 25-second advantage. The gap to Vettel went: 3.2, 5.8, 7.6, 9.7, 11.5, 13.5, 15.3, 17.3, 18.7, 20.3, 21.1, 22.7, 24.0, 25.2 on Lap 51. Even when Lewis came in he was still putting in laps that were a second quicker than Vettel. But he was right to be jumpy about the possibility of a late Safety Car. We’ve now had ten in seven races.
Overtaking Move of the Race
Lap 59: Jean-Eric Vergne, Toro Rosso on Kimi Raikkonen for P7
In the latter stages of the race Jean-Eric Vergne looked like a man on a mission, and we all know what that mission is… To remind other teams that last season he was a pretty good match for Daniel Ricciardo who is now embarrassing a four-time World Champion. In the closing stages of the race on fresher tyres he came up against the Bottas train and picked them off one by one. Hulkenberg’s Force India was a nadgy pass, but on Lap 59 he threw his Toro Rosso down the inside of Kimi Raikkonen into Turn One and got the car stopped with only a slight lock-up of tyres. He then dispensed with Bottas and managed to get five seconds clear of Perez to negate his five-second penalty, given to him, for going off track to pass Maldonado.
It looked to many as though Maldonado had forced him off the track, but JEV got a five-second penalty for it. Interestingly, Fernando Alonso, in a far more calculated run off the track limits, didn’t give up that amount of time to the cars behind when he did it on Lap 1.

Winners
Sebastian Vettel, Red Bull, 2nd
With no Rosberg to interfere with his run to Turn 1, Sebastian got a flying start, which was briefly interrupted by Alonso taking the short-cut to P2. He had to hand the place back to Seb straight away. Team-mate Daniel Ricciardo was thinking that maybe he should have got a place back, too, but was too polite to say despite a lot of post-race prompts. After that Vettel was clearly the faster of the two Red Bull drivers thanks to what seemed like a recurring problem for Daniel’s energy recovery system. Vettel’s tyres started going away from Lap 9 when Hamilton’s lead suddenly went from 3.8 seconds to 5.1.
So right from early on it was clear that this was not going to be a race when Red Bull matched the Mercedes for pace despite a few people predicting that Vettel or Ricciardo might win.