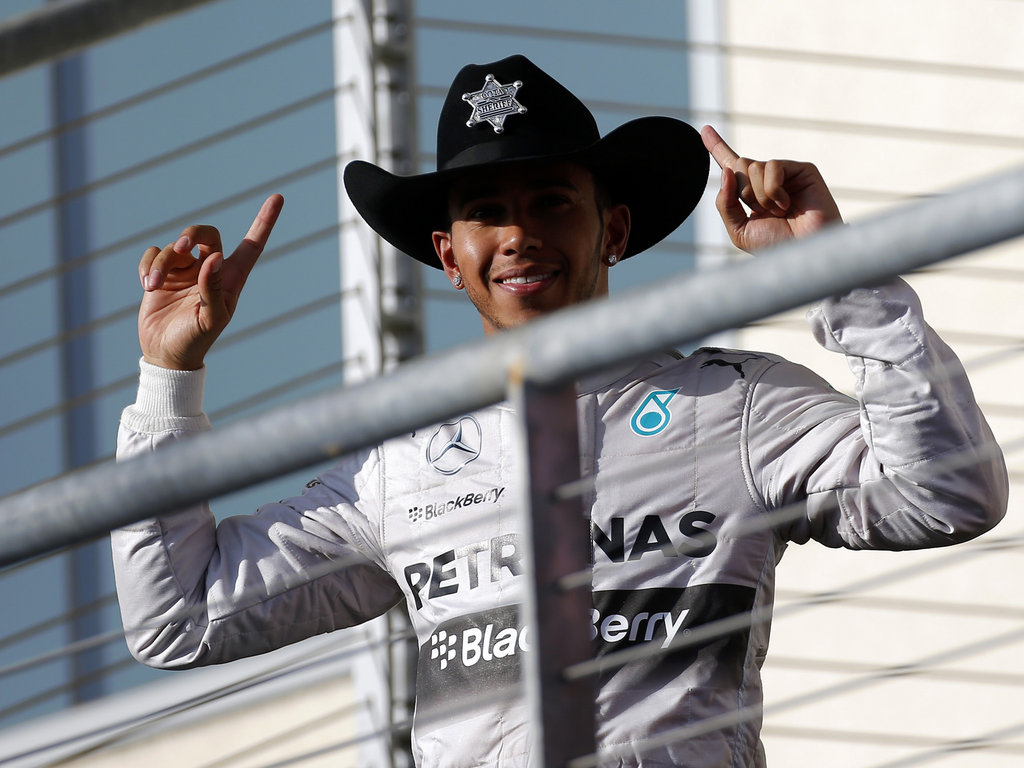 Star of the Race
Lewis Hamilton, Mercedes, 1st
Lewis loves Austin and Austin loves Lewis. He’s the Austin Ambassador. It was a carefully thought out race from Hamilton after an irregular front brake temperature cost him the chance of pole on Saturday. Once he’d got away from the dodgy side of the grid in front of both Williams then his fate was in his own hands. The lock-ups he’d suffered on Saturday had limited the life of his tyres in the first stint. And so he lost out when Mercedes pitted Nico late, dropping back to 2.5 secs down because he was obliged to stop after Rosberg, who had better life left in his Softs and as leader could choose his moment.
Once some wing was taken out at the first stop, the car was optimally balanced and he moved from 2.5 down on Lap 18, to 1.8, 1.4, 1.0, 0.7, 0.8 on Lap 23. When he suddenly scored a purple (fastest) first sector eight laps into a tyre stint, on Lap 24, you knew something like a Monza charge was on the way and he nailed Rosberg that lap.
From then on it was a question of tyre and engine management. In Qualifying the W05 had been 1.1 second per lap clear of anyone else, but Felipe Massa was only 4.9 seconds behind (now second place) Rosberg on Lap 30. In the final stint both cars began to push and show what they could really do – by Lap 46 they were lapping 1.6 seconds quicker than third place Daniel Ricciardo who was going flat out to keep in front of Massa. When Nico upped his pace, Lewis had the buffer to respond.
Overtaking Move of the Race
Lap 50: Jean-Eric Verne on Romain Grosjean for P9
The stewards may have penalised him for the move, but the late-braking dive up the inside that JEV delivered to Romain Grosjean at Turn 1 was another example of the Frenchman’s great racing ability. As Marussia reserve driver Alexander Rossi said, “It was a little bit NASCAR, and rubbin’s racing, right…?”
Grosjean was clearly not watching, otherwise he wouldn’t have gasped. “What was that?” immediately afterwards. He had his eyes firmly fixed on Jenson Button a few car lengths in front and whereas some overtaking moves require the overtaken car to take a different line, Grosjean had his head fixed so firmly on the car in front that that was never going to be a possibility. And if the stewards don’t like the idea of contact then they should be consistent and penalise the wayward Pastor Maldonado for needlessly cannoning into Jenson Button’s tyres in the closing stages after ignoring the blue flags and blocking Nico Rosberg.
JEV had earlier managed a pass on Sebastian Vettel at the improbable location of Turn 9 on Lap 26, and his swift pass on Jenson Button’s McLaren was also a thing of beauty.
Winners
Nico Rosberg, Mercedes, 2nd Nico Rosberg was bearing up after the race and said, with a smile on his face, “It sucks, you know, being passed like that with the same car.” Rosberg did very little wrong in the race, apart from react far too late to Hamilton’s charge down the inside at Turn 12 on Lap 24. By the time he began to move over both cars were already well into the braking zone.
Daniel Ricciardo, Red Bull, 3rd
Daniel’s comeback from a poor getaway started as early as the braking zone for Turn 1, as he came through and gave a friendly little nudge to Jenson Button before going round the outside of Kimi Raikkonen. He used his considerable racecraft to ease past Magnussen and Alonso, then left it to the engineers at Red Bull to pull the strategy needed to get past both Williams. This was supposed to be a circuit where the Mercedes grunt would put them out of reach.

Felipe Massa, Williams, 4th
Massa got a great start, fended of Fernando Alonso and jinked past his team-mate, but just lost out to the Wile E Coyote undercut strategy of the Red Bull team and Dan Ricciardo. It all came down to the pitstops. Bottas stopped on Lap 30, Ricciardo stopped on Lap 31 and Massa came in on Lap 32. Had Williams elected to bring Felipe in when he still had a two second advantage over Ricciardo on Lap 31, then they might have scraped a podium. As it is, they have all but cemented third place in the constructors’ championship.
Valtteri Bottas, Williams, 5th
Valtteri has come a long way after scoring his first World Championship points at Austin in 2013. Given the Williams team’s resurgence, fifth place is almost a disappointment.
Fernando Alonso, Ferrari, 6th
Some epic racing from Fernando, who had a lot of fun with Jenson Button, not quite as much with Sebastian Vettel, and managed to keep in front of him right at the end despite a vibration that blurred his vision. On paper he delivered P6 from P6 on the grid, but he had to work very hard to keep his F14T where he started. There’s also the small matter of finishing 64 seconds behind the P5 car.
Sebastian Vettel, Red Bull, 7th
When Red Bull brought Sebastian Vettel in for a pit-stop on Lap 49, with just seven laps to go, it looked like they might have encountered a sudden problem on the car. “Vettel bringing it in to retire it,” thought BBC commentator Ben Edwards. But no, out he came again with a set of Softs, having dropped from P7 to P14, and hammered the Fastest Lap down to 1:41.379 on Lap 50. He then engaged in a series of muscular overtaking moves, picking off the stragglers doomed to run to the finish on fading tyres.
Losers
Sergio Perez, Force India, DNF
Checo almost managed to take out three cars in one corner with a bit of inexpert braking on Lap 1. Thankfully Raikkonen’s car survived, but Adrian Sutil’s did not. It must have been a huge blow for all the Mexican fans who had made the trip north to see their hero, but at least it was his own fault. And they must be getting used to it after his accident in Canada.
Adrian Sutil, Sauber, DNF
Adrian is still to complete a racing lap of Austin, though qualifying the car P9 must be a small compensation. Whether the Sauber could have maintained that pace in the race is anyone’s guess, for once the Lotus cars were looking racy, (even though Romain Grosjean seemed to complete 25% of his race distance on the run-off tarmac).
Jenson Button, McLaren, 12th
Jenson did a lot of racing today for nil points and most of it was down to taking a gearbox penalty, which meant he couldn’t start from his Qualifying position of P7. Which meant he was behind Magnussen not in front, which meant he got double-teamed at the first tyre stop, which meant he lost a few places, and which meant that when the second stops came round he stayed out too long and lost some more places, and yada yada yada.
Kimi Raikkonen, Ferrari, 13th
For a lot of the race Kimi was not that far behind Fernando Alonso, but the Finn was plagued yet again by a sliding front-end that gave him constant understeer. “Japan was similar – we fight with understeer the whole weekend and whatever we do we can’t seem to get rid of it. Then you can expect to destroy the front tyres.” Which he did.
Media Watch
Jenny Gow posing a question to Red Bull boss Christian Horner. “Engines, what can you do about them? This is the 17th race of the weekend…”
Eddie Jordan was asked what he thought about the situation with Marussia and Caterham potentially going out of business (deep breath now): “Well, you have to ask Mr Ecclestone that. Because I believe what he said a few races ago, about diminishing the number of teams to run three cars absolutely made no sense to these young teams, because anyone who was either talking to a sponsor, or credibility, or even staff; anyone involved in drivers, the whole thing undermined their whole existence in my opinion and from that point, therefore, these teams were never given a chance. I don’t think Bernie has embraced them. I don’t think F1 has embraced them.”
“People are running around me, down to the podium situation.” Jenny Gow
Andrew Davies