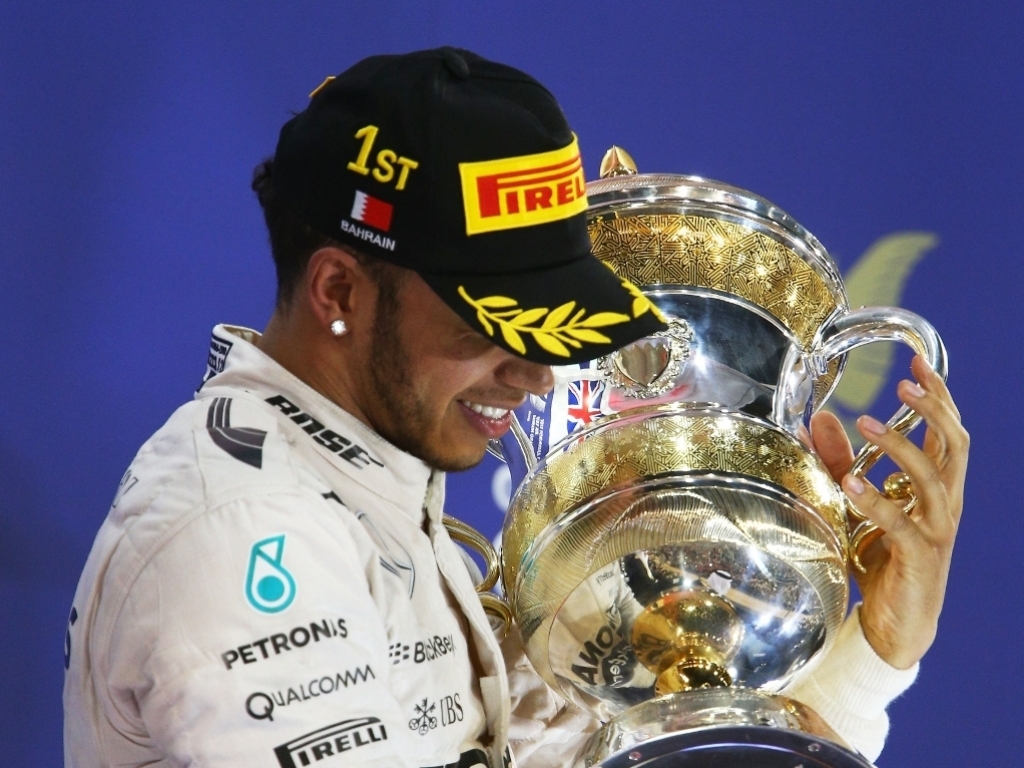 Star of the Race
Kimi Raikkonen, Ferrari, 2nd
Depending on how serious Lewis Hamilton’s last-lap Break-By-Wire failure was, Kimi might have been on for a win had the race run to 58 laps. But it didn’t and he didn’t. And as we were reminded from his Lotus career – a drive against the odds to capture second place doesn’t really excite him that much.
As early as Lap 9 Kimi was being held up by team-mate Sebastian Vettel and he radioed to engineer Dave Greenwood, “I think I can go a bit faster, but I will try and overtake.”
His ability to keep pace with the cars in front during the middle stint, on the slower Medium tyre  was particularly impressive.
On Lap 22
Hamilton – 1:39.0
Rosberg – 1:39.4Vettel – 1:39.3
Raikkonen – 1:39.0
On Lap 19 the gap to Vettel was 10.0 seconds, by Lap 31 he’d got the deficit to his team-mate down to 4.3 seconds. Rosberg may have gifted him second place when his brakes failed just at the wrong moment, but you kind of felt that Kimi would have found a way past anyway. Once over the finish line and showered with praise by his team on the radio, we didn’t get a euphoric: “Bella! Bella! Bella! Multi grande!” we got a “Yeah, thanks everybody”. That’s how it should be. His 7th podium in Bahrain and his 78th career podium wasn’t on the step he wanted to be. And the day Kimi starts spouting Italian on the slowing down lap is the day Bernie goes and gives John Booth a great big hug.

Overtaking Move of the Race
Lap 25: Felipe Nasr, Sauber, on Felipe Massa, Williams
More heroics from Felipe Nasr who made a superb overtaking move on Nico Hulkenberg, (not with the DRS) later in the race. On Lap 25 he was in a hurry to get past Felipe Massa and claim 11th place. Massa anticipated him coming and took a defensive line into Turn 11, but Nasr saw that it gave Massa poor traction out of the corner and swept up the inside before Turn 12 in a beautifully executed, clean move.
It kind of spoiled thing that he, Massa and Maldonado then came into the pits line astern – 11th, 12th and 13th – and that they left the pits in the order – Maldonado, Massa, Nasr, but it was still a great move.

Winners
Lewis Hamilton, Mercedes, 1st
Another dominant pole position, backed up by a flying getaway, put Lewis in the perfect position to control the race. Mercedes made him play the team game by pitting Nico Rosberg first, when it was obvious that he would lose out to the two cars behind by coming into pitlane third. The other two managed to gain three or four seconds on him, so it was a good job he had the buffer.
The rest of the race was another exercise in tyre and engine management, with a last minute panic when the brakes became too hot.

Nico Rosberg, Mercedes, 3rd
Nico finally got the message that there could be no more pussying  around while Lewis Hamilton disappeared off into the distance. Having lost out in Qualifying and at the start, he had no choice but to attack once he was demoted to P4. His passes of Raikkonen and multiple Turn 1 passes of Vettel showed that he can get aggressive when it’s required. His pass of Raikkonen – who wouldn’t give it up – included the same exit-of-turn-4-move that Lewis had employed on him last year and which he’d studied pre-race.
As he said, it was good to pass some red cars – but it would still be better to pass a silver one, and not just Alonso.

Valtteri Bottas, Williams, 4th
A superb defensive drive from Bottas who managed to keep a four-times World Champion in a faster car at bay for 14 laps. On Lap 53 he got away with a misjudgement from Vettel who sliced past his rear tyre by centimetres into Turn 1. That had puncture and post-race acrimony written all over it.

Sebastian Vettel, Ferrari, 5th
Not such a great race for Seb, he was beaten for race pace by his team-mate, out-muscled a couple of times by the guy who rarely out-muscles, and then forced into a last corner mistake that warranted an extra pit-stop. Then he got stuck behind a canny Bottas who knew exactly where to position his car and where to apply the hybrid energy in defence of fourth place.

Daniel Ricciardo, Red Bull, 6th
Some good points for the Red Bull team but at a cost. Dan’s lonely run to P6 was ruined about 100 metres before the flag when his Renault engine shrugged its shoulders in a gallic way and emitted the smoke of a thousand gauloises. So, four races in and he’s almost through his seaon’s allowance. McLaren-Honda thought they had this particular title race sewn up, but it looks like Red Bull are going to push them all the way.

Romain Grosjean, Lotus, 7th
More important points for Lotus, Grosjean made the most of his stronger qualifying position and was 7th or thereabouts for much of the race. He was 23 seconds shy of Daniel Ricciardo at the flag, but then again he probably wasn’t stressing his engine so much.

Losers
Jenson Button, McLaren, DNS
Grand Prix statisticians absolutely hate this kind of thing. It was Jenson Button’s 100th race weekend for McLaren, but he still only has 99 race starts. This race will always be an asterisk.  It can’t have been a comfortable weekend for Ron Dennis, entertaining one of the team’s biggest investors (the Bahrain sovereign fund) and watching Button repeatedly park it a few hundred metres beyond the pitlane exit.

Felipe Massa, Williams, 10th
Felipe’s car failed to fire up on the grid and the subsequent pitlane start meant he was back there in the wild west of Maldonado country. A damaged floor from a Pastor shunt limited his progress through the field and he had to watch Dan Ricciardo carry home his pre-destined 6th place points.

Pastor Maldonado, Lotus, 15th
Nick Heidfeld’s speciality always used to be long, lonely races, where he didn’t see anybody after the first few laps. Pastor is the opposite, he rarely has calm races where he circulates on his own. At the start, he decided to go for someone else’s grid slot. On the opening lap he got contact from Max Verstappen – the fourth race out of four that someone has hit him. Then he had a coming together with Felipe Massa. Never dull.

Toro Rosso, Double DNF
After such a great start to the season, a double failure for the Toro Rosso team will come as a significant blow. They had never scored points in Bahrain before, so maybe it was to be expected, but it is rapidly becoming the garage full of anguished parents.

Media Watch
STBO Award
The BBC’s Ben Edwards won this one convincingly. After Sebastian Vettel sustained wing damage and had to return to the pits for an extra-long pit-stop while the nose was changed, Ben came up with: “This could well count against him getting a podium finish.” With 21 laps left, Vettel set off 35 seconds behind P3.

Suzi Perry after Jenson ground to a halt beyond the pitlane exit (or maybe a nad’s more): “It’s one thing and the other for Jenson this weekend.”

Eddie Jordan in Qualifying: “It’s all about bragging rights – and Sainz there, just pulling the wool over Verstappen’s face at the last minute.”

Allan McNish  “I haven’t seen Nico Rosberg driving with that much teeth for a long, long time.”

Final Lap
A big thank-you to Michelle Foster and Shahida Jacobs for putting up with this errant column over the last 12 years. Just as the McLaren-Honda will be sporting a far superior rear end in Barcelona, so PlanetF1 will be running a new (and superior) post-race feature after the Spanish GP. You will still be able to catch up with the indulgences and eccentricities of Winners and Losers on OffonF1.com – where it started, back in the heady days of Rivals.net and the dot.com boom.